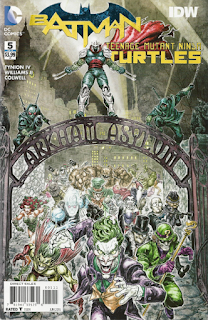 At the Bat-Signal, Commissioner Gordon meets with Batman and, much to his surprise, Leonardo and Raphael.  Gordon says that Arkham has been overtaken by a group of ninja calling themselves the Foot Clan.  Then the Penguin steps out of the shadows and says he’s taking a very big risk by betraying the Shredder, however, he wants Batman to know that the Shredder has teamed with Ra’s Al Ghul and the League of Assassins.  With this new intel in hand, Batman and the Turtles leave, only for Leo to collapse a few rooftops later, finally succumbing to the mutagen erosion. 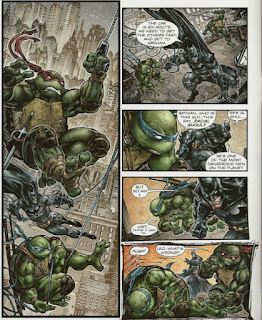 Down in the Batcave, Michelangelo and Donatello are playing video games on the Bat-Computer when Casey finally recovers.  Casey thinks they need to get a move on, and a voice agrees with him.  Damien, the current Robin and son of Batman, emerges and wants to know what all the trespassers are doing in his cave (and playing with his game system).

Robin starts smacking the Turtles and Casey around when Batman returns and tells him that they’re allies.  Everyone is worried about Leo, of course, and Alfred and Splinter come rushing down from Wayne Manor with a stretcher.  Casey then shows Batman the special device Harold gave him before he left called the Slingshot.  With enough power to boost its signal, the Slingshot can home in on the portal and send them all back to their dimension.  However, the connection weakens the longer they’re in this dimension and they have to go back now or potentially never return at all. 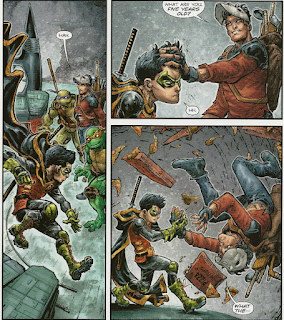 Leo is against leaving the Shredder behind to wreak havoc in this world, but Batman assures him that he can handle things and encourages the Turtles to go home.  Batman and Robin then leave in the Batwing to deal with Arkham, as Splinter warns Batman not to underestimate the Shredder.  Alfred, too, suggests they take the Intimidator Suit as a precaution, but Batman doesn’t think he’ll need it.

Batman and Robin drop in on Arkham Asylum and are immediately met by the Penguin.  As punishment for betraying the Shredder, he was the first to be mutated and now stands as an anthropomorphic emperor penguin.  More than that, Penguin has been tasked with the lowly assignment of leading the first wave of Arkham mutants against Batman. 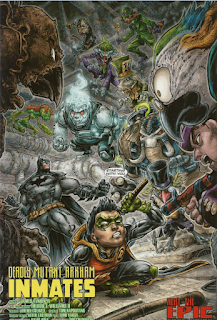 *The Intimidator Suit was seen under construction in Batman/TMNT #1.

This crossover has been everything I could have wanted it to be and I’m not ashamed to say I love it.  Yes, it has been very silly in places but can you honestly say that you WOULDN’T want to see the Shredder mutate the inmates of Arkham into the greatest assortment of action figures that never existed?  You sir, are a liar.

Admittedly, this penultimate chapter functions in the same way most penultimate chapters do, in that its primarily build-up to the conclusion.  As such, there isn’t a whole lot of action in this issue and the big money-shot is the cliffhanger for the next and final installment.

There is some overlap that makes the issue feel stretched out a bit.  You’ve got Penguin and Commissioner Gordon informing Batman that the League of Assassins have come to Gotham and teamed with Shredder and the Foot Clan, but then a few pages later Robin shows up and gives intel to Batman that says nearly the same thing.  Narrative-wise, the redundancies set up unique threads; Penguin’s betrayal and Leo’s collapse, and Robin entering the game because we’ve all been asking “Where’s Robin?” these past five months.  The ends justify the means, I just wish Robin could have laid something more substantially informative on Batman other than something every other character (and the readers) already know.

But even if the issue is mostly getting us from Act II to Act III, it looks so damn good I don’t think anyone will get bored along the way.  That two-page spread of Leo and Raph on the Bat-Signal is just gorgeous, with special praise needing to be delivered to the colorist, Jeremy Colwell.  The fight between the Turtles and Damien is ostensibly the action missing from the issue, though it hinges on that crossover cliché, “the misunderstanding”, that we already went through when the book began.  There isn’t really any tension, as we could all predict Batman would arrive in the nick of time, but again, Williams puts a lot of energy into it so it remains a cool sequence despite its predictability.

The cliffhanger was great, goofy fun and I’m dying for the next chapter to see all the wacky Arkham mutants in action.  I hope we get even more than the ones from the final splash page (characters like Harley Quinn, the Creeper and Clayface appear on the cover of this issue, but there’s no telling if they’ll actually be in the comic).

I can just imagine Tynion sitting in front of his computer and laboring over which animals made the most “sense” to match with each villain.  There’s a logic to most of the choices that you can follow: The Riddler’s sly, so he’s a fox.  Poison Ivy preys on men, so she’s a praying mantis.  The Mad Hatter of the book had the March Hare as his friend, so naturally…

Others are maybe a little more obtuse, like the Joker as a cobra.  I assume it’s because cobras spit venom and Joker historically squirts acid and Joker Venom from his corsage.  I guess a hyena would’ve been too obvious, right?  Two-Face as a baboon I admit I don’t really get, but maybe it’s because he was a lawyer and Tynion’s trying to make some commentary about them.

My favorite is Mr. Freeze as a polar bear, by the way.

So anyway, the Batman/TMNT crossover thus far has been straddling a line between cool and silly, which has always been the line both franchises have tightrope walked.  And Tynion has managed that balancing act expertly so far.  We've got cool, dramatic sequences like the aforementioned Bat-Signal spread, and then we've got mutant animal super villains.  It's a little bit of everything.

Here’s hoping Tynion and Williams stick the landing next month, but I’m not too worried.