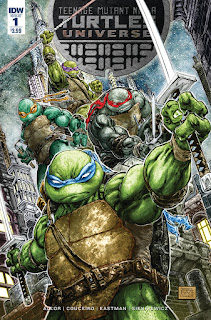 TMNT Universe #1 will be coming in August!

According to the solicit, it's essentially going to be the Micro-Series style expanded into an ongoing anthology.  And that's pretty much what I've been wanting for a long time.

IDW's TMNT ongoing has been burdened with what you'd term a "good problem to have".  Basically, there were too many cool and compelling characters for a single series to do justice.  The series of companion minis have almost all been excellent, but just not quite enough.

With that in mind, TMNT Universe is more of a good thing.  It'll give the ongoing some breathing room, letting the Turtles take center stage in their own book again while allowing all those other cool characters a chance to have adventures independent from the Turtles.  And many of them, such as the Mutanimals and the Alopex/Nobody/Harold team, have long had the potential to carry their own narratives

Paul Allor was announced as the first head writer and he (along with Erik Burnham) has been one of the best recurring writers in the series.  Utrom Empire and Mutanimals were both excellent.

Should be good stuff and no doubt an impending headache for my IDW timeline.  But eh, no one's MAKING me do that chronology shit so it's a headache of my own design.