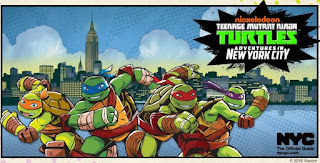 On a ferry just off Staten Island, the Turtles are going for a ride.  Michelangelo proceeds to make jokes about how everything is “ferry nice” or “ferry inspirational”, which agitates Raphael.  Mikey thinks that Raph is “ferry grumpy”.

Later, after visiting the museums of Flushing Meadows Corona Park, the Turtles check out the Unisphere.  Raph thinks he could bench press it, but Donatello disagrees, citing its weight as 900,000lbs.  Leonardo jokes that Donnie must be in love with the thing. 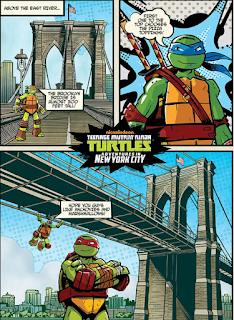 Next, above the East River, the Turtles swoon over how tall the Brooklyn Bridge is.  Leo suggests a race to the top, winner chooses the next pizza topping.  Donnie takes the lead, insisting on anchovies and marshmallows.

Afterward, on Liberty Island, Donnie thinks Lady Liberty would make a great addition to the Ninja Turtles.  Leo figures all she needs is a mask and Mikey says she’s got the right color skin tone for the job. 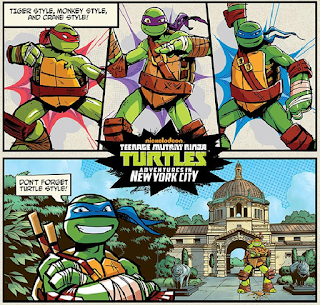 Finally, at the Bronx Zoo, Raph suggests that animals have inspired the best martial arts styles.  He, Donnie and Leo then show off the Tiger, Monkey and Crane Styles.  Leo then turns to Mikey, who is stuffing pizza in his face, and figures he’s demonstrating the Turtle Style.

*On April 20, 2016, the Teenage Mutant Ninja Turtles were made official ambassadors of the City of New York via their NYCGo Family Ambassador Program.  The honor included using the TMNT as part of an advertising campaign to teach children about New York City history and culture (and also promote tourism).

*Part of the program included these comics, which you can read Here.

*Incidentally, I have a feeling there might be more of these comics once the program rolls out in full, possibly a LOT more.  And I may never find all of them.  With that in mind, consider these summaries as a sampling of the types of comics NYCGo is producing for the campaign.

*The art for the Turtles appears to be repurposed from IDW’s TMNT New Animated Adventures series.  No credits are given, so I’m not sure who did the new background art that they’re overlaid onto.

This is a pretty big honor for the Teenage Mutant Ninja Turtles, being named cultural ambassadors by the City of New York.  I mean, go through the catalogs of your brain and think of as many fictional characters as you can who hail from NYC, and then realize that the TMNT were chosen above all of them to represent the city.  Yeah, I’m sure Viacom pulled some strings to make it happen, but whatever.  It’s still a pretty big honor.

Using fictional children's icons as cultural ambassadors isn’t a new thing, of course.  I think Hello Kitty is still an official cultural ambassador of Japan.  It’s mostly done for tourism under the veil of “education”, but I suppose it also speaks to the kind of international appeal the Turtles have.  They weren’t selected just because they’ll attract more American kids to New York, but because they’ll be recognized by children all over the world (who will then beg their parents to bring them and all their money to New York City).

Personally, I’ve visited New York City twice in my life so far, and without getting mushy, I will say that it is an incredible experience.  So many movies and TV shows have been filmed there, and so many comics and cartoons have been set there, that when you first arrive you feel like you’ve just crossed some sort of boundary into a fictional place that only ever existed on celluloid or in your mind’s eye.  But I will ALSO say that my feelings can be summed up with the old cliché: “It’s a nice place to visit but I wouldn’t want to live there.”  Because holy shit, I wouldn’t want to live there.  (A meaningless declaration on my part anyway, because I could never afford to live there even if I wanted to.)

These comics, production-wise, aren’t very good, no.  They use what looks like cut and paste artwork from the IDW New Animated Adventures comics.  It looks like Brizuela’s art and Breckel’s colors, but I might be wrong.  They’re slapped onto new artwork of New York City environments without a whole lot of consideration for scale or environmental interaction.  So the characters float on the grass of Corona Park and in the Brooklyn Bridge comic, Donnie is about 50 feet-tall.  Then there's the Statue of Liberty... 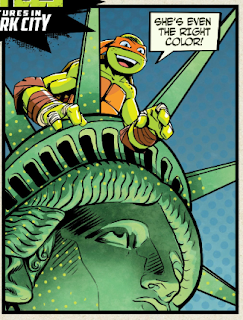 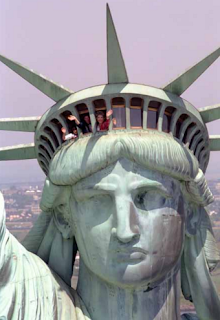 But I don’t think they necessarily NEED to be great, thought-provoking comics.  Each strip showcases a tourist destination and imparts at least one factoid on the audience, followed immediately by a cheap joke.  They get the job done and they’re only meant to be a cute way to get the kids engaged in sightseeing.

I’m not entirely sure of the delivery method for these comics.  Will they be included in pamphlets?  As part of an app?  The press release that included them as a photo gallery isn’t entirely clear and the TMNT section of the NYCGo website doesn’t seem to be entirely up and running yet.  As a matter of fact, there may end up being quite a few more of these comics, if they really intend for the Turtles to give a full-blown tour of the city.  So the ones I summarized are most likely just a sampling.

Anyway, while the comics are kind of eh, this review isn’t really about them.  I just think it’s damn cool that the Turtles have made it this big, to be officially recognized as cultural ambassadors.  It’s quite an achievement for the brand.