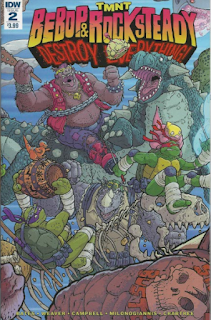 Rio De Janeiro, 2016.  The Turtles and Renet consider going back in time after Bebop and Rocksteady.  However, Renet warns them that whenever anyone travels through time, it creates an alternate timeline to prevent paradoxes.  So they could go chasing after Bebop and Rocksteady, but that would mean they wouldn’t be able to return to the same timeline they left from (ya know, like in Back to the Future Part II).  With Savanti Romero nowhere in sight and the two mutants their only lead, they decide to follow the trail Savanti's scepter has left and go back in time anyway. 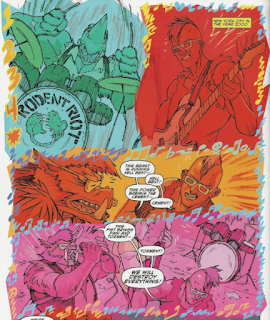 New York, 2000.  The mutant Bebop and Rocksteady are busy bonding with their younger human counterparts via a jam session.  Afterward, the older mutants try to dispense wisdom on their younger selves, who aren’t getting along very well at this point in their history.  Mutant Bebop then has a great idea and suggests that their human counterparts join the Foot Clan now so they can get an earlier chance at success.

The Cretaceous period.  Savanti Romero, Bebop and Rocksteady ready their dinosaur steads (a T-rex, a velociraptor, and an ankylosaur) while simultaneously kicking a baby raptor out of the “gang” for being too small.  Romero intends to attack an Utrom research camp with his new henchmen and use the advanced technology to send himself back to the 79th Dimension.  They attack the Utroms (Churk among them) while the baby raptor wanders off and bumps into none other than Pepperoni, the baby protoceratops that befriended Raph. 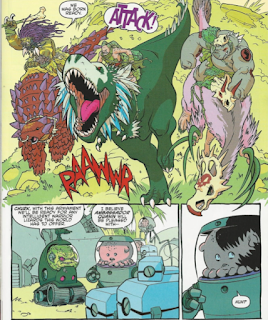 The Turtles and Renet soon arrive in the Cretaceous and, witnessing the attack on the Utroms, the Turtles surmise that they’ve arrived shortly after their first visit.  Raph immediately calls for Pepperoni, who comes scampering to him with the baby raptor in tow.  Their reunion is interrupted when another time portal shows up and an elderly Lord Renet of the Time Mistresses arrives to challenge Romero.  With Bebop and Rocksteady’s help, Romero steals Lord Renet’s scepter and mortally wounds her.  He escapes through a time portal, leaving Lord Renet and the similarly wounded Bebop and Rocksteady behind.  Young Renet rushes to her older self’s side and Lord Renet tells her to get the scepter back and remove the gem from it.  Renet, the Turtles, Pepperoni and the baby raptor head into the portal.

As they chase Romero, he escapes down a separate path, sending the Turtles, Renet and the baby raptor to an alternate timeline.  Pepperoni gets separated from the group and also vanishes down an alternate route.

New York, 2000.  The two sets of Bebop and Rocksteadies pile into the younger versions’ cruiser and head to Foot HQ.  They’re dismayed to find out that at this point in time, the Foot are primarily involved in white collar crime and insist they’re a legitimate business.  Mutant Bebop then suggests that they use their magic wand to travel to 2016.  They pile back into the cruiser and Bebop opens a time portal. 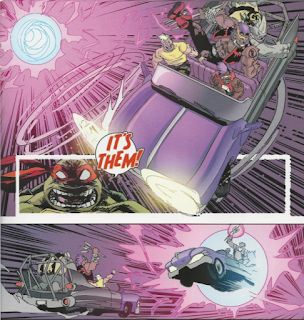 The Turtles and Renet look on in total confusion and horror.

*The Turtles visited the Cretaceous era, meeting the Utroms and Pepperoni, in TMNT: Turtles in Time #1.

*Bebop and Rocksteady’s cruiser is based on the Foot Cruiser vehicle from the original 1987 Playmates TMNT toyline.

*The Foot Clan being a “legitimate business” while under the stewardship of Karai’s father, Oroku Yori, was established in TMNT Villains Micro-Series #5: Karai.

*This issue was originally published with 2 variant covers: Regular Cover by Nick Pitarra and Michael Garland, and Subscription Cover by Sophie Campbell.

What the fuck is going ooooooon!?

Yeah, this is gonna be one of THOSE miniseries.  A “don’t think too hard about it right now, it’ll all make sense when the story’s over, or maybe it won’t, just enjoy the ride” kind of miniseries.

With all the alternate dimensions and intersecting timelines, I get a feeling everything that seems inexplicable and unexplained NOW will loop back around in the last couple of issues.  Stuff like where the Cretaceous Bebop and Rocksteady came from, or what was up with the other set of Bebop and Rocksteadies in the cruiser that pops up in the time portal.  Man, I hope it does, because right now I’m as baffled as the Turtles and Renet in that last panel.

Maybe all will be explained or maybe it won’t.  Who the FUCK cares?  PEPPERONI’S BACK! 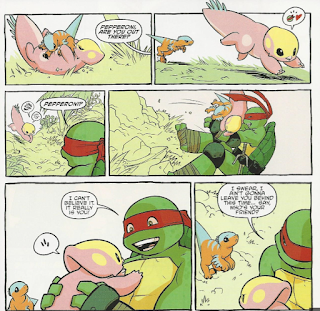 The next three issues of Bebop & Rocksteady Destroy Everything could be 60 consecutive pages of this: 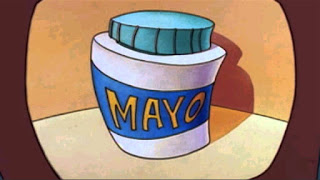 And I couldn’t give a shit.  I’ve already gotten what I wanted.  Check please.

Admittedly, Pepperoni isn’t as cute when artists that lack the last name “Campbell” draw her, but I can live with that.  Yeah, it’s superficial, but dammit if Pepperoni isn’t adorable and I feel there’s plenty of storytelling potential in the Turtles having a pet dinosaur in New York.  I mean, she’s not going to stay tiny forever, right? 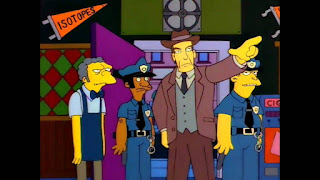 “Alright, but you people remember: Baby dinosaurs may seem like a cute idea for a pet… But they grow up.”

Likewise, the art features more cartoonish exaggerations than the usual IDW stuff, further inciting you to let your guard down and have fun.  This isn’t serious business.  The same set of artists from the first issue handle this one and I’ve a feeling they’ll stick with it in this back-and-forth manner through to the end.

I didn’t talk much about Milogiannis’s work last issue because he contributed the least number of pages, but he gets more to work with in this installment.  He does all the pages taking place in 2000, and while his style doesn’t have quite as much cartooning to it as those of his partners, he still gets the comedy aspect.  The scene where Bebop and Rocksteady confront the receptionist got more of the humor across in body language and layouts than exaggerated expressions.  And the jam session on page 2 looked pretty great.

Anyway, I’ve read some conflicting reviews of this mini so far.  I know the “flying by the seat of your pants and not knowing what’s going on” storytelling style can be off-putting to some, but I think it’s a good fit for the kind of ridiculous nonsense you’d expect from a Bebop & Rocksteady mini.