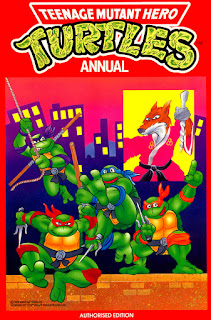 *The series continues in TMHT Annual 1991.

*Despite being published by Grandreams, their Annuals and Specials used many of the same artists and writers as Fleetway's TMHT Adventures comic.

*Like all other TMNT media released in the UK, the series was retitled "Teenage Mutant Hero Turtles" due to the word "Ninja" being considered too violent for European audiences.

*All issues in the Annual series also contained puzzles, games and other features.