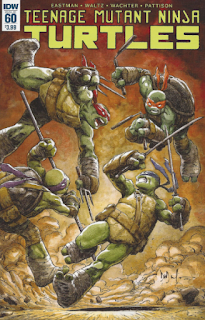 Feudal Japan.  A retainer rides home when he spots a four-tailed fox.  He shoots arrows at it to scare it away, but the fox only grows angry.  Swiftly, it grabs a torch and races toward his home.  The fox transforms into a woman and burns his house to the ground before transforming once more and vanishing.  The lesson of this tale is that some creatures exact vengeance quickly and are best left alone. 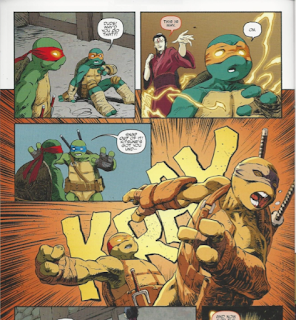 Foot HQ, the present.  Kitsune plunges her knife into Splinter’s chest, however, his kevlar vest protects him.  Undaunted, Kitsune uses her powers to seize the minds of Raphael and Michelangelo and sics them on Splinter and Leonardo.  Her powers are useless against Splinter, who is too strong for her, and Leo is able to overcome her mind-control as he’s had experience with it.  Meanwhile, Jennika faces down Alopex but is soon overpowered.

Downstairs in the Foot archives, April is researching the scroll when she’s approached by Aka.  Aka tells her that she needs to help her friends and, giving her a feather, makes April promise to memorize something. 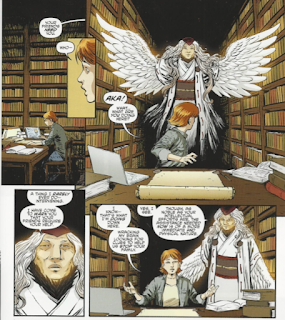 Back upstairs, Splinter takes down Mikey and Raph with nerve pinches.  A portal opens up and Donatello arrives, but Kitsune immediately brainwashes him and sends him to fight Splinter.  As for Jennika, Leonardo intervenes before Alopex can kill her and Alopex has a brief moment of lucidity before attacking Leo again.  Leo defeats her, and likewise Splinter defeats Donnie.

Kitsune is not intimidated, at least until April arrives with the feather and recites a magic spell.  Kistune recognizes the feather as belonging to her sibling and is frightened once she realizes that the spell has negated her mind control.  Kitsune transforms into a fox and flees.  As she does, Aka watches from the shadows.  The Rat King approaches her and chides his sister for abandoning her neutral status. 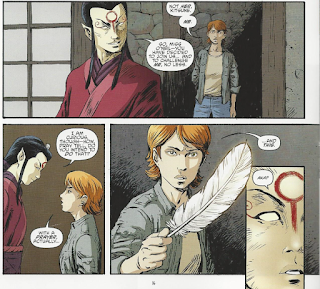 Soon, the Turtles recover from their fight and April promises to tell them everything she knows about the Pantheon and the war they’re waging.  Jennika interrupts with the bad news that Alopex has gone missing.

On the roof, Kitsune boards the helicopter she ordered her mind controlled Foot Soldiers to prepare for her.  She discovers that Aka’s spell has worn off and she’s able to keep the Foot Soldiers under her command.  As they escape, Kitsune gloats that she got exactly what she wanted: The head of her beloved.  She opens the chest and is dismayed to find that it contains only the Shredder’s helmet.

Back in Foot HQ, Splinter holds the skull of Oroku Saki, having outplayed Kitsune at her own game.

*This issue featured a dedication to famed comics artist Darwyn Cooke, who passed away on May 14, 2016.

A strong finish to a pretty good two-parter.  I kinda feel like we got a couple answers, even if they weren’t preached outloud to us.  I’d wondered if Kitsune actually loved Shredder in any capacity, or if she was just using him as a pawn in her game.  The fact that she refers to him as “beloved” even in private and seeks to be reunited with him seems to illustrate that she retains some affections for him.

So even a godlike creature such as her is capable of emotional indulgences.  And I like that.  It gives a little bit of humanity to the character of Kitsune, who has sort of just been a two-dimensional villainess thus far in the series.  I guess you could say the Shredder is her weakness.  After all, she was willing to spend several centuries soaking in a tub of ooze, feigning to need it in order to be resurrected, when she was immortal all along.  That takes some devotion.

While I didn’t care much for the Casey & April miniseries, it did establish a little bit more about the Pantheon.  At the very least, it introduced Aka and I’d been wondering when she was going to show up in the pages of the ongoing.  Her presence here brought April into a more proactive role in the series (April had been cooling her heels in the title for a while), so that’s another plus.  April’s incantation was pretty cheesy stuff, but perfectly alright for this comic and Ninja Turtles in general.  So long as the poetry rhymes and has meter, I can’t hate it.  Free verse is bullshit.

Jennika is still… I dunno.  She’s fairly new to the club and all, but I can’t see what the endgame with her is.  She’s a young Foot Assassin who wants to prove herself to the Clan, but is that all?  She hasn’t received much of a personality yet, or even back story to define her motivations.  But hey, maybe she’ll surprise me.  We’re pretty early in her career.

Alopex is off the game board again.  We’ve sort of done this “is she a friend or is she a foe” thing twice before; hopefully this third go around isn’t stretched for too long.  Alopex was actually in a cool little niche as part of Harold and Nobody’s team, I really don’t want to see that dynamic broken up before it could bear fruit.

Anyway, this was a nice little two-parter.  I don’t know if it truly progressed the Pantheon stuff all that much, but it at least caught the cast up with what the reader already knows.  We’ve known for eons about the Rat King and we’ve known about Alopex’s sleeper agent status for just as long; finally the characters in the book are up to speed with us.  Perhaps now we can see some real forward momentum.

If I have anything else to say about this issue, aside from complimenting Dave Wachter’s excellent art, it’s that the narrative sticks to one location for the duration.  It’s all within the confines of Foot HQ.  So we don’t have that jerking around from thread to thread to thread thing that’s been a bit of a problem with the series, lately.  As a result, it’s very focused and a big moment in the series is given time to have impact; Waltz lets it breathe instead of flipping channels to see what else is on.