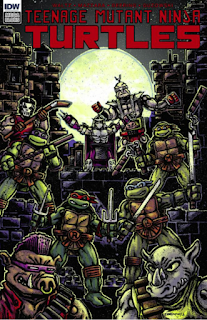 In a black and white New York City, the "Mirage" Turtles (rendered in the style of Mega Bloks) spot a dimensional portal open up.  They're shocked to see (a colorful version of) the Shredder and his Foot Soldiers come waltzing through, since last they checked the Shredder was dead.  Donatello deduces that this Shredder must be from another universe (a Mega Bloks version of the Fred Wolf cartoon) and he's opened the portal with the controller in his hands.  Raphael suggests they beat him up and send him back where he came from. 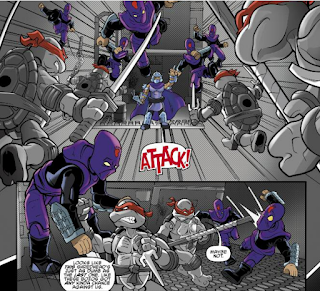 The Turtles attack just as the Shredder vows to conquer the New York City of this universe.  The Turtles take down his Foot Soldiers, but Shredder isn't finished.  He opens up another portal and out charge Bebop and Rocksteady.  Luckily, the Turtles brought their own backup: Casey Jones!

Unfortunately, they can't out-muscle the Foot mutants and take it on the chin through the whole fight.  Casey suddenly has an idea and, borrowing Raph's bandana, uses the red cloth to incite Rocksteady to charge like a bull.  Rocksteady plows through Bebop and Shredder and smashes into a building, knocking the whole thing over onto the Foot. 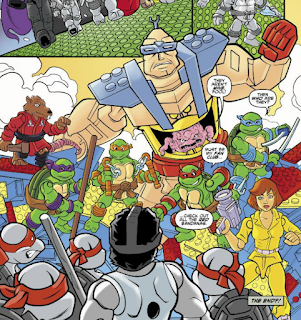 The Turtles recover the controller from the unconscious Shredder, open a portal and drag their enemies back to the colorful dimension they came from.  Much to their surprise, they find their multi-colored bandana-ed counterparts, a Splinter and an April battling Krang.  The Fred Wolf Turtles aren't sure who these new guys are and Fred Wolf Raphael suggests that they're his fan club.  After all, why else would they all be wearing red bandanas?

*This special comic was available only at the 2016 San Diego Comic Con.  It was being given away at the Mattel Mega Bloks booth alongside several TMNT/Mega Bloks exclusive toys and sets.

*CHET ALERT: The shop Rocksteady knocks over is called "Chet's Toys".  The name "Chet" was an Easter egg the Mirage crew (and I guess IDW crew) would sneak into their books because... they just liked the name!

*This issue was originally published with 2 variant covers: Cover A by Kevin Eastman and Tomi Varga, and Cover B by Eastman (black and white version).

Hey, this was pretty great!  This is the third San Diego Comic Con exclusive TMNT comic that IDW has offered and I think it's my favorite thus far.  It continues the theme of rendering the Turtles in the style of one of their current toylines (the first special was a photo-comic using the Playmates action figures, the second special was based on the LEGO TMNT figures), and while all the specials have been enjoyably offbeat, I think this one has the most fun with the idea.

We essentially get a "Mirage TMNT meet the Fred Wolf TMNT" story, albeit done through the lens of the Mega Bloks toyline aesthetic (so I wouldn't take it too seriously), and it's an enjoyable complement to the "Turtles Forever" TV movie or the "Trans-Dimensional Turtles" episode of the Nickelodeon cartoon.  But unlike those other two crossovers, Waltz doesn't overdo the Mirage TMNT's more "mature" personalities.  "Forever" and "Trans-Dimensional" essentially characterized the Mirage Turtles as being out for blood the instant they saw something that provoked them, but I think anyone who has read enough Mirage comics knows they were never that bloodthirsty.

Instead, Waltz maintains the "mature" integrity of the Mirage TMNT by referencing how they killed the Shredder, but otherwise their first instinct is to send the Fred Wolf Shredder back where he came from, NOT chop him to pieces and feast on his organs.  I didn't mind the Mirage TMNT being characterized as psychos in those other crossovers so much, but this was, I dunno, refreshingly accurate.

And likewise, the Fred Wolf characters are appropriately in tune with their portrayals.  Shredder is a blowhard who insults everyone (even mindless robots) but ultimately fails because he sucks, Raph gets a nice self-aware joke in, and Bebop and Rocksteady...

Ya know, there is one thing that I think stands out above anything else when trying to characterize the Fred Wolf Bebop and Rocksteady.  One tiny, seemingly insignificant detail that ultimately makes all the difference... 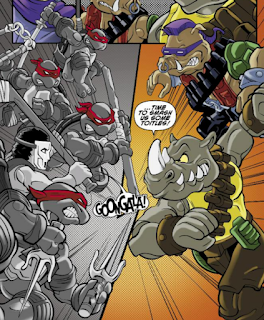 Steve Murphy ("Dean Clarrain") managed to put that in there when he scripted the Archie comic and it goes a long way in making their cartoon voices leap off the page and ring in your ear.  My hats go off to any writer who puts enough thought and effort into their scripts to get that right.

Mazzara's art finds a nice balance between the look of the Mega Bloks toys and the source material they're representing.  As a result, the characters all have hinged joints, peg-holes under their feet, clip-shaped hands and the landscape is full of bumps for interlocking block pieces... but they can still emote and pose in ways the toys can't.  As such, they don't look stiff and lifeless.  The layouts are very cool with a lot of characters-on-top-of-panels overlays which form semi-splash pages.  Dug the coloring by Guzokski, too; the colorful Fred Wolf characters really pop in the drab Mirage universe.

All in all, this was just a 12-pager, but it was really enjoyable.  I'm grateful Mattel decided to make it available for free on their website.