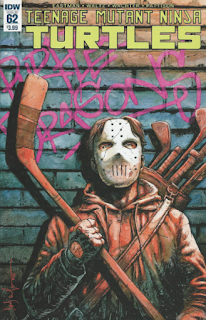 At Purple Dragon HQ, the dregs of the disbanded gang are rudely awakened by Casey Jones.  They tell him to get lost, as they no longer serve Hun, but Casey still has a bone to pick with them.  Casey proceeds to beat the snot out of every Dragon in the place. 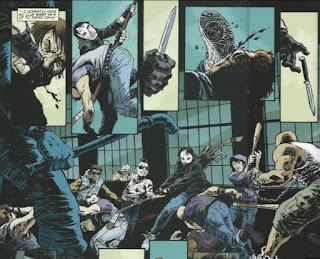 In the Foot Clan archives, April laments to Donatello how much they have on their plate.  Donnie tells her to focus on her assignment, researching the Pantheon, while he and the others each tend to their duties.  And he promises her that if she needs any help, he’s got her back.

At Dun Import/Export, Darius Dun and Jammer check in on Harold.  Dun sees he’s about to come to and orders Jammer to fetch the Inventor.

At the Church Lair, Raphael, Michelangelo and Woody enjoy a pizza before Woody heads back to work.  After Woody leaves, Raph once again implores Mikey to rejoin his family.  Mikey continues on his trip about Splinter crossing the line by killing the Shredder and taking over the Foot Clan, but Raph won’t hear it.  He tells Mikey that if Splinter hadn’t killed Shredder, things would be bad, and if he hadn’t taken over the Foot, things might actually be worse.  He tells Mikey that his family misses him and needs to know he’s got their back.  Mikey agrees to rejoin his brothers. 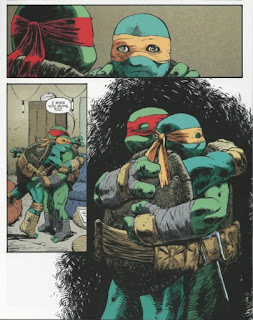 At Harold’s lab, Donnie finds signs of a struggle and, upon reviewing the security cam footage, learns of Harold’s kidnapping.

Back at Dun Import/Export, the Inventor is brought in by Jammer and Turk.  She turns out to be Dr. Libby Meitner, who doesn’t care for the melodramatic codename which Dun insists is required to avoid revealing identities to any potential interlopers.  Dr. Meitner is aware that the Turtles have developed countermeasures to the Street Phantom cloaks she invented, but isn’t too keen on helping Dun create counter-countermeasures.

Dun decides to regale her with a story from his youth.  Back in high school, he was a burly football player and natural athlete, but his passions dwelt in the sciences.  Unfortunately, he lacked the aptitude for science, so to get his foot in the door, he began befriending nerds as a means to an end.  Dun summarizes his tale by informing Dr. Meitner that he has the innate ability to get what he wants by any means necessary.  He then shows her the holding cell containing Harold, her former partner, and orders her to convince him to join Dun’s organization and help her create new weapons. 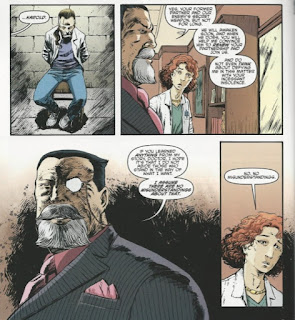 At Foot HQ, Donnie returns to tell Splinter, Leonardo and Jennika the bad news about Harold.  Splinter reveals that he had Jennika inform Dun of Harold’s location to the Street Phantoms, as his capture was an integral part of his scheme to destroy the Street Phantoms.  Donnie isn’t too thrilled with his friend being used as an asset in Splinter’s war, but Splinter assures him and all the Foot Soldiers in his court that the Street Phantoms will be destroyed immediately.

After last month’s tedious recap issue, “Chasing Phantoms” is getting underway.  Although the Street Phantoms have been hanging around for a dozen issues now, we’ve seen precious little of Dun, their ominous overlord.  The brief origin story provided for him was concise and all the better for it; Dun didn’t need his own Microseries and the brevity tells us all we need to know about him without stretching it too thin.

And to go on a tangent, I like characters who don’t necessarily have an aptitude for something, but a passion for it anyway, and use their gifts to achieve their goals.  Old Hob is that sort of character; he sure as hell doesn’t know how to make mutants, but he’s good at surrounding himself with the talent needed to get them.  Dun looks to be a character cast from a similar mold, as Waltz sort of harmonizes his brutish character design with his characterization as an inventor/scientist.

It brings me to another aspect I love about the IDW series.  No one is a “jack of all trades” at anything.  Donnie is smart, but he isn’t a miracle worker adept at all forms of “science”.  When there are disciplines he isn’t skilled at, he has Harold and the Fugitoid to help him figure things about.  Hob, as mentioned, is a charismatic leader and a clever manipulator, but he needs scientists like Lindsey to make his mutants and military strategists like Man Ray and Herman to come up with his battle plans.  And likewise, Dun is a big, scary strongman and a ruthless businessman, but he lacks the brains to directly build what he wants.

I fuckin’ love that.  It makes these characters feel so much more real and fleshed out, but not weaker for their foibles.  In all of these cases, the characters are aware of their limitations and find ways to circumvent their shortcomings and meet their goals anyway.  The approach not only makes for stronger characters, but for better stories.  It’s a real shitfest when a plot is resolved with “Donnie cures it/builds it/invents it because SCIENCE”.

So yeah, it’s IDW's tried and true method, but one that works and I’m happy to see it applied to Dun.

We also finally meet the Inventor: The mysterious woman who stole Harold’s work from him (at least according to his account).  She turns out to be someone we’ve never met before (I’d previously guessed it was Madame Null), which is fine since it gives us another fresh face.  It’s for the best that not every character is connected; too many happenstances and koinky-dinks and the universe begins to feel very, very small.

Mikey is finally over his Splinter angst, or so it seems, and I was kind of hoping that angle would last a little longer.  Yeah, it’s been a dozen issues, but Mikey spent half of that fighting alongside his brothers so it hasn’t felt like much of a self-exile.  Then again, Splinter was acting like a ruthless prick in this issue, so maybe Mikey will turn right back around before too long.

As for Splinter, it’s an interesting thing to see him as the legit leader of the Foot Clan for an extended period of time.  Certain continuities have included Splinter/Hamato Yoshi as leader of the Foot Clan before Shredder/Oroku Saki deposed him, but we’ve never gotten to see much of it.  How exactly DID the gentle and caring patriarch lead his gang of highly trained assassins?  The keyword there, by the by, is “assassins”.  When you’re in charge of hundreds of murderers-for-hire, how much of a nice guy could you actually be?

It’s funny, because most continuities treat it as Splinter having put that life behind him.  They don’t skirt around the fact that he was involved in a gang of killers (though the kid-centric media treat that Foot Clan of Splinter’s era as a martial arts dojo at best and a gang of thieves at worst), but make it clear that he isn’t into killing as a career anymore.

With Splinter taking over the Foot, we get to see him return to what he was like back in those days; days before his sons came into the picture.  And it’s the Turtles, his sons, whose POV we’re seeing this all from.  They look at all this and think Splinter’s acting out of character, but the reality is that this is the sort of stuff you have to do in order to run a group of assassins, and Splinter was always a member of the Foot Clan.

I mean, it’s not like the Turtles didn’t KNOW that their dad was an assassin back in the day.  What did they think he was going to do when he took over ALL the assassins?  Stop assassin-ing?

Wachter’s art is dark and dreary and just right for the story.  His inks looked especially good on the Casey Jones segment; from the big splash page to the two-page spread.  It’s got that “gritty” look to it that still manages to fit in with the IDW aesthetic without going full Mirage on us.  He adapts for the tender moments, too, and the sequence where Raph gets Mikey to come home had an appropriate vibe of saccharine melodrama to it.

Anyhow, after a rough patch last month with a filler sort of story, we get some precious content in this installment and it’s all good stuff.  Casey is back in peak form and I think that’s got me psyched more than any other development.  IDW’s finally remembered that Casey’s supposed to kick ass.