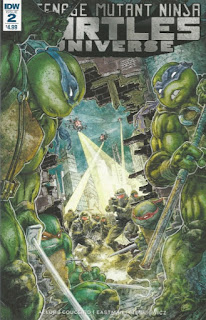 Inside the T.C.R.I. Building, Leonardo orders his brothers to split up; he and Michelangelo will find April while Raphael keeps the unconscious Donatello safe from the EPF Soldiers who are about to storm the place.

Outside, Detective Lewis spreads a bogus story among the NYPD that the building is just dealing with a chemical spill.  Agent Bishop is pleased and has more perimeter defense orbs dispatched.  He then convenes with Colonel Knight and Sergeant Winter who reveal that scans indicate that there are two humans in the building. 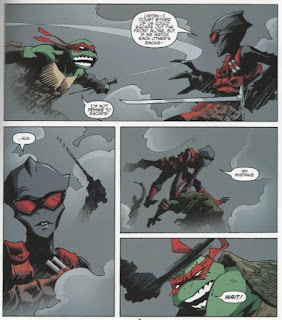 Inside, the EPF storm the lobby but are immediately caught in a smokescreen by Raph.  The scorpion mutant appears in the smoke, killing soldiers, and offers an alliance with Raph.  He refuses and she abandons him.  Raph is quickly overwhelmed by the EPF (meanwhile, Donnie has been stashed in an air shaft).

Elsewhere, April sneaks away while Baxter Stockman begins to gear up in his armory.  He receives a call from Bishop and, as soon as both sides establish the other’s identity, Baxter offers to cooperate.  Bishop immediately hangs up on him.  Detective Lewis asks why he rejected Stockman’s help and Bishop reveals that he knows how traitorous Stockman is and that he would only double-cross them.  In fact, Bishop says that once they’ve won the upcoming “war”, Stockman will be first in line for execution.  Lewis begins to think Bishop might be a little unhinged.

Back inside, the scorpion bumps into April and takes her hostage, exchanging the sword she stole from Leo for April’s gun.  Leo and Mikey run into them and the scorpion drops April and heads for the roof.  Leo gives chase, but as the scorpion tries to leap across the rooftops, a defense orb tazes her and sends her plummeting to the asphalt.  As EPF soldiers swarm her, Mikey decides to save her and swoops in to rescue her before she’s beaten to death. 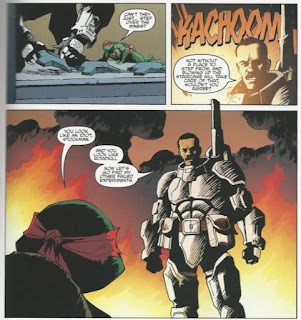 Down in the lobby, Stockman arrives in his armor, kills all the EPF soldiers and booby-traps the entrance with landmines.  He reluctantly agrees to work with Raph and, along with Donatello, they convene with the others. 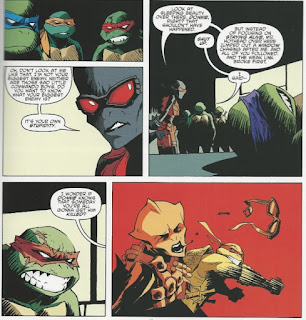 Baxter takes them to his central command center and April helps him to get the system online so they can monitor what the EPF is up to.  Meanwhile, the bound scorpion mutant begins mocking Raph, saying that it’s his fault Donnie is out cold.  Raph loses his temper and begins beating up the scorpion, threatening to kill her.

Leonardo escapes the Foot Soldiers and lands in the park, but it isn’t the park he recognizes.  He’s soon beset by weird floating Utroms and thinks he hears Alopex calling out to him. 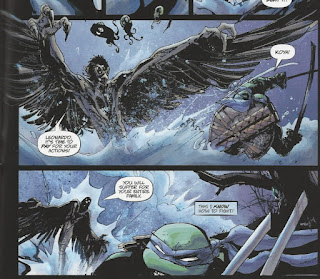 Leo wanders into the woods and emerges in front of the farmhouse in Northampton.  Before he can get it together, he’s attacked by Koya who wants revenge for her previous defeats.  Leo races back into the woods where Koya can’t fly after him, but she sends the weird Utroms to pursue him.  Leo finds a sewer tunnel and stands his ground at the entrance, calling for Koya to come and get him.

There are a lot of “strange bedfellows” in this storyline so far, with multiple factions first at each other’s throats and now having to work together.  It’s one of those “hard to keep score” type of stories and I’m a fan of those.

One of the bits I enjoyed was seeing what it took for some of these alliances to stick.  The scorpion (again, identified online by the artist as “Zodi” though she still hasn’t been called that in the comic) suggests an alliance to Raph when the fight with the EPF soldiers in the lobby starts, but he outright denies her and she leaves.  Fast forward a few pages and Raph has been jacked up by the EPF.  So when Baxter Stockman steps in and suggests an alliance, hey look at that, Raph’s a little more open to compromise.

I enjoyed the almost casual familiarity the Turtles treat Baxter with.  They’ve been dealing with him a LOT, since the first issue of the series, so they’re almost at the “frienemies” stage.  They hate his guts, but they’re so fuckin’ used to him that they can crack jokes to his face and there’s no more shock and awe when he steps into their lives.

As for Bishop, we’re getting a little better of an idea about how IDW plans to portray him, now.  Looks like he’s a tad more fanatical than his 4Kids counterpart, less “shadow ops mad scientist” and more “saber-rattling general”.  The bits about there being a “war” on the horizon were a little cliché, but it is something the IDW book has been working toward for a good while.  Old Hob and the Mutanimals have been gearing up for a “war” since they got together, and the EPF have been shown monitoring them in the pages of the ongoing series.  So all this stuff about an upcoming war is nothing new.  Hope we get it sooner than later.

Couceiro’s art is still right on top, and you know what, it reminds me a lot of Dan Duncan’s work from the beginning of the series.  The way the Turtles gnash their teeth or grimace, along with the heavy inking, just screams “Duncan” to me, but of course its textured with Couceiro’s own aesthetic fingerprint.  Also, April has the same sort of long hair that she sported at the beginning of the book; another bit of a throwback.

The back-up is starting to make a little more “sense” now.  And by that I mean it’s making less sense, but in doing so, is making more sense.  So it’s clear that Leo is in some sort of fantasy, be it a dream or a hallucination or whatever.  Now we know why the Foot were attacking him last issue and why it was “okay” for him to kill all those dudes (when the book thus far has made a big deal about the Turtles having a No Kill policy).

So with that out of the way, I think we can let our guard down and enjoy a weird tale where Leo fights creepy floating zombie Utroms.  Sienkiewicz keeps it nice and spooky and his rendition of Koya is particularly monstrous (he didn’t anthropomorphize her head has much as other artists and the less expressive bird features actually make her look more fearsome).

Universe continues to be a fun read.  That said, I think the $5 price point was a bad move on IDW’s part.  I’m digging the bonus back-up, but I think a lot of comic readers draw a line at $4 for their books, to say nothing of the casual fan.  Kind of hard to convince someone to try out a book on a whim when it costs as much as their lunch.