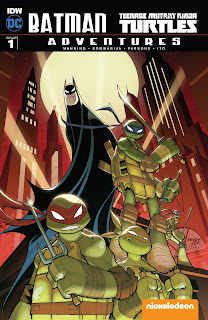 "The Face of Two Worlds"

New York City.  A thief runs through an alley with a sack of loot, but is stopped by Michelangelo who tries to openly play superhero.  After the thief faints, Leonardo tells Michelangelo that they’ll have a talk about his conduct later. 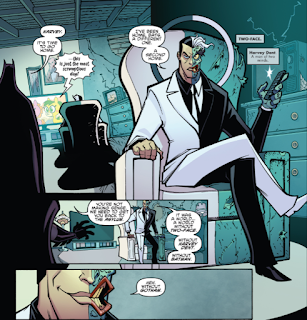 Gotham City.  Batman creeps into a two-tone tenement, fights off some henchmen and finds Two-Face absentmindedly watching televisions.  Batman asks Two-Face where all the Arkham inmates disappeared to, but Two-Face’s mind seems fractured.  Two-Face draws a triangle and mentions something about two worlds before giving up without a struggle.

New York.  In the lair, Leo tries to lecture Mikey about keeping to the shadows, but Mikey just wants to be a superhero so bad.  Donatello and April, meanwhile, pick up a reading on their sensors that a Kraang dimensional portal has been opened.  Mikey is surprised, since they recently defeated the Kraang for good, but the Turtles have no choice but to investigate.

Arkham Asylum.  Batman investigates the empty cells and in each of them he finds a triangle pattern on the wall.  He takes a scraping before Security Office Aaron Cash walks by, having just locked Two-Face back up. 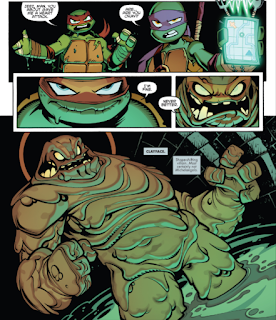 The sewers.  The Turtles and April follow the signal to an open Kraang portal (triangle-shaped).  Mikey is suddenly attacked from below the water and is pulled down.  He resurfaces and everyone relaxes, at least until he transforms into Clayface!  Clayface pummels the Turtles until Mikey shows back up and distracts him with name-calling.  That gives Donnie time to blast Clayface with water from a drainage pipe, the force sending him back through the portal.  The portal then closes and the Turtles are left with lots of questions.

The Batcave.  Batman looks over the list of missing Arkham inmates (the Joker, Harley Quinn, Scarecrow, Mad Hatter, Clayface, Poison Ivy) while analyzing the energy residue he scraped off.  The source appears to be otherworldly, but he was able to program the Batcomputer to alert him to any energy spikes similar to the one that happened before the inmates escaped.  The alarm goes off and Batman rushes to the Batmobile, telling Alfred to call Robin. 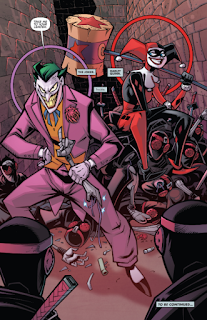 Chinatown.  A unit of Footbots investigate an alley and find several of their robot kin dismantled.  They’re greeted by the Joker and Harley Quinn, who are new in town and wish to be taken “to their leader”.

*This Nickelodeon-based TMNT miniseries was preceded by TMNT Amazing Adventures #14.  The story continues in Batman/TMNT Adventures #2.

*In February, 2017, a Director's Cut edition of this issue was released by IDW.

*In an interview, Manning and Somariva explained that from Batman's POV, the series takes place between Batman: The Animated Series and The New Batman Adventures.  For the Turtles, it takes place before they went into outer space at the start of season 4.

*The show Two-Face is watching is “Pretty Pretty Pegasus”, a cartoon series featured in Teen Titans Go! (and obviously a spoof on My Little Pony).

*The Turtles defeated the Kraang (seemingly for good) in the season 3 episode "Battle for New York".

Hey, we’ve got another Batman/TMNT miniseries on our hands.  Rather than go with a sequel to the previous one, IDW and DC opted to team up two DIFFERENT incarnations of the characters for a new "first" encounter.

My hopes are that we don’t retread too much ground from the first miniseries, as now the characters will have to meet each other “for the first time” all over again.  We’ve already witnessed a bit of rehashing in this first issue alone, as the Turtles encounter one of Batman’s second string villains in the sewers and defeat him handily.  They did that in Batman/TMNT #1, albeit their opponent was Killer Croc, not Clayface.  It’s a good warmup act, but you might be feeling some deja vu.

Such reservations aside, I loved Batman: The Animated Series back when it first aired and it’s one of those rare cartoons from my childhood that has aged gracefully to the point of being just as enjoyable now as it was then.  So this is an incarnation of Batman that I’m much more familiar with (I hadn’t read enough of the New 52 era to really call myself an expert on that Batman).  Manning gets the beats and voices of the characters down nicely, from Alfred’s goofing on his master to Batman’s coddling of Two-Face (his strained friendship with Harvey Dent being an angle The Animated Series regularly played up).

Where exactly this miniseries falls into place regarding the Batman cartoon timeline, I don’t know yet.  Batman is dressed in his Animated Series costume, but the Batmobile is the New Batman Adventures design.  Likewise, this Two-Face looks more like the New Batman Adventures design, but Clayface looks more like the Animated Series design.  So which is it?  Eh, I’m sure it’ll be clearer when we see Robin next issue; if it’s Dick Grayson or Tim Drake. (EDIT: Turns out it takes place between the two shows, hence the overlap in aesthetics.)

Sommariva’s pencils have a very elastic look about them and the characters do appear extremely animated.  I’ll confess that Chad Thomas was my favorite penciller from IDW’s Nick-based TMNT comics, but Sommariva was never far behind.  His style is very expressive and the characters stay on-model between their various universes.  Batman looks like he stepped out of his cartoon and the Turtles look like they stepped out of theirs.  The aesthetics don’t clash as much as you’d think.

He does resort to some cheap time-savers that aren’t so appealing, though.  He draws characters that are prominently in the midground as crudely as if they were specs in the background.  Oftentimes there isn’t that much distance between a detailed character standing in the foreground and a vaguely shaped color blob in the midground, yet the disparity in effort would have you believe that they’re miles apart.  He also does the ole “cut and paste the same art between multiple panels, but only change one figure” trick that I’ve never liked.  C’mon, artists of the world.  You’re better than that.

While we’re perhaps tempered to the expectation of diminishing returns (this is the second Batman/TMNT crossover; not as exciting as a first), there’s still plenty of potential for fun in seeing these cartoon versions of the characters interact.  We’ve already hit some rerun moments from the first miniseries, but hopefully that won’t be too frequent an encounter.