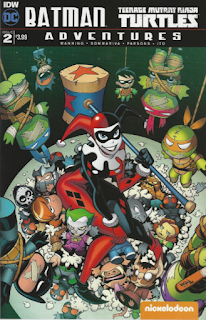 "The Clown and the Clan"

Arkham Asylum, a week ago.  While being taken to her cell by Aaron Cash, Harley Quinn takes out the guards and springs the Joker.  They plot their escape just as a pair of Kraang portals appear, much to their surprise, and they use them to get away. 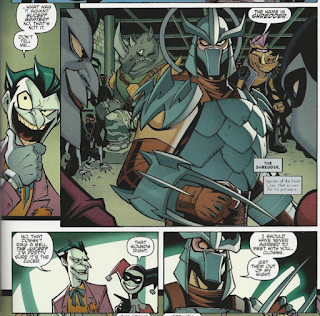 New York City, now.  The Joker and Harley relay their story to the Shredder as they meet in an abandoned warehouse.  The Shredder loses his patience with the Joker quickly and orders Bebop and Rocksteady to execute him.  The Joker knocks the mutants back with an exploding rubber chicken, but before a horde of Foot Soldiers can swoop in, Joker points to the ceiling and the hundreds of rubber chickens dangling from it.

Gotham City.  Batman convenes with Robin and Batgirl and lets them in on what he’s learned about the alien interdimensional portals.  Batman has devised a way to track when they open and the Caped Crusaders head toward the nearest one on his radar.  They find the portal in an alley and ponder what’s on the other side. 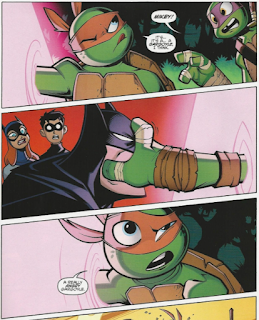 Central Park.  The Turtles and April track down the nearest portal and Michelangelo reaches around inside.  He accidentally grabs Batman’s face, inciting the Dark Knight to react.  The superheroes swoop in from Gotham and attack the Turtles.  Donatello is immediately smitten with Batgirl, but she just pounds his face in and then turns to take April on.  Mikey decides to fight “the pirate” (Robin), but the Boy Wonder knocks him down with an uppercut.  Raphael lunges at Batman, but is removed from the fight with a single strike to the Plastron.  Batman and Leonardo then go toe-to-toe, but as they fight they both realize that neither of them are going for lethal strikes and begin to realize they’re on the same side. 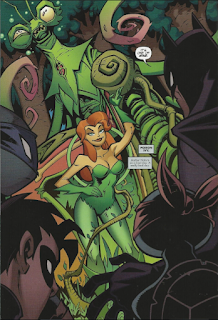 Suddenly, Snakeweed storms into the middle of the fight and Leo tells Batman to stay back, as the mutant is one of their enemies.  Batman corrects Leo, pointing to the one who is controlling Snakeweed: Poison Ivy.

The “Batman and the Turtles mistakenly fight but realize they're on the same side” cliché was the big overlapping moment between this miniseries and the last Batman/TMNT miniseries I was dreading.  We got that already, so I really didn’t want to go through it all over again.

Luckily, Manning gets us through it as quickly as possible, with Leo and Batman determining that they’re on the same side based on their fighting styles.  The fight eats up most of this installment, but who can really complain?  Conquered territory or not, I’m sure everyone picking up this miniseries wanted to see Batman and the Turtles fight… even if it was all over again.

So far as the fight goes, Manning isn’t very kind to the Turtles.  Most of them get felled with a single blow, and some of them don’t even get a single swing in (Donatello’s fondness for redheads proves his undoing).  So as far as the main attraction goes, I found the big brawl a little underwhelming.  It was pretty lopsided and the Turtles wind up looking fairly pathetic.  I’m not saying they could necessarily BEAT the Batfamily (or Gotham Knights of whatever the fuck you wanna call them), but jeez they really take it on the chin in this one.

That said, we’re hopefully past that part of the narrative, now, which means that we can get to the team-up portion.  Snakeweed and Poison Ivy seem like an intuitive pairing I’m rather ashamed I didn’t see coming.  Got my fingers crossed we’ll get a Scarecrow/Rat King duo somewhere in this thing.  Double the Jeffrey Combs!

To talk about the Bat characters, the narrative boxes make note that Batgirl is new to the crime-fighting scene (she was a late addition to The Animated Series and didn’t really come into her own until New Batman Adventures).  So with that in mind, her seemingly out-of-character moment where she kicks Donatello in the face as he’s extending his hand in friendship and trying to apologize might make a little more sense.  And anyway, I guess Manning just wanted to get Donnie out of the way so the two redheads could duke it out.

The prologue with the Joker and Harley meeting the Shredder was a fun diversion; we’ll see if we get a team-up out of it by next issue.  Manning has their voices down and I could hear Hamill and Sorkin in my head with their first speech bubbles.  There’s not much more to that sequence, however.

Sommariva’s pencils pack in a lot of cartoony squash-n-stretch and I think I like it.  The layouts are great and even if the fight sequence in the park was one-sided as all getout, he adds a lot of elastic energy to it so it doesn’t quite seem that way on the surface.  And I like the way he draws the Joker.  It looks like a midpoint between his Animated Series and New Batman Adventures designs (fitting, considering the chronological placement of this mini).

Anyhow, this miniseries has been cute so far, but it hasn’t really wowed me yet.  We’re finally past the overlap elements from the first crossover, so maybe it’ll start gaining steam in the installments to come.  Villain team-ups are the quickest way to my heart, so I think they’re on the right track.