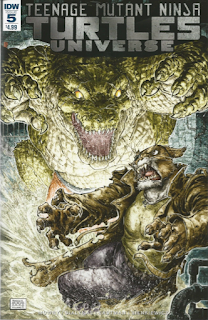 Christmas Eve in New York City.  A pair of street thugs drag a kidnapped dog to a dogfighting ring run by Hun.  From the sewers, Leatherhead watches them, scratching notes on the walls of his lair.  Angered by the cruelty, he decides to follow. 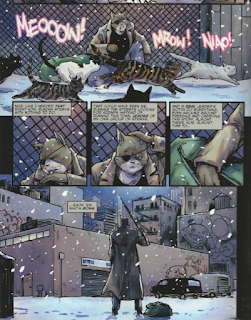 Elsewhere, Old Hob is on the prowl, wanting even with Hun for breaking their gun-running arrangement.  He’s sick of humans abandoning him, remembering the time his human family left him out in the cold when he was a normal cat, and wants some cathartic payback.

In a warehouse, Hun and his thugs enjoy the dogfights when suddenly Leatherhead bursts through the wall and sets the dogs free.  Hob drops by at the same time and, upon seeing Leatherhead, immediately tries to recruit him to the Mutanimals.  Leatherhead isn’t interested, but the two mutants are forced to work together when Hun’s thugs open fire (well-armed by all the guns that Hun stole from Hob when he broke ties).  Hob and Leatherhead fight their way through the thugs, killing most of them and sending the others into retreat. 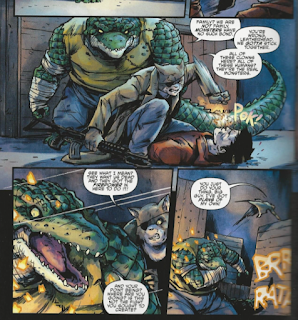 Eventually, only Hun is left.  Hob uses Leatherhead to intimidate him and takes back the money Hun took from him when he ran out on their partnership.  Leatherhead then interrupts and attacks Hob, allowing Hun to escape.  Leatherhead does not believe in Hob’s “mutant cause”, seeing mutants as affronts to the natural world, and does not think they should have the chance to defend themselves or prosper.  Hob disagrees, of course, and seeing that Leatherhead won’t join his cause, decides to ignite a case of grenades and set the warehouse on fire. 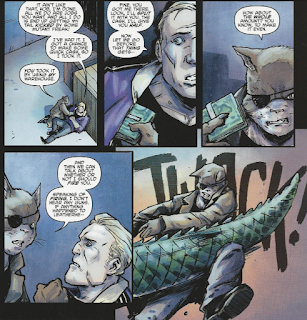 Hob escapes as the warehouse explodes, but so does Leatherhead.  Leatherhead returns to his lair in the sewers and continues scratching notes on the walls.  This time, he carves in notes about Hob next to data on the Turtles and the Utroms.  Hob, meanwhile, returns to his family at Mutanimal HQ, only to find the place empty on Christmas Eve.

Leonardo suddenly finds himself in New York City, where he’s attacked by Casey Jones.  Casey tells Leo that while he wears a mask to gain an identity, Leo wears a mask to conceal his identity.  Leo then comes face to face with Dark Leo, who claims to be his “true” identity.  Dark Leo pummels Leo and he surrenders, accepting that maybe Splinter was right and all he’ll ever be is a Foot Soldier.  Suddenly, Leo sees a vision of his mother, Tang Shen, telling him that he must believe in himself just as his father does.  Leo banishes Dark Leo from his thoughts. 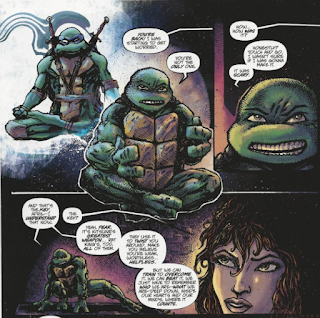 Leo awakens from his meditation as April watches over him.  April asks him if he learned anything about the mental techniques of Kitsune and the Rat King.  Leo says that they use your worst fears and insecurities against you in order to warp you into something you aren’t.  However, if you believe in yourself, you can overcome their mind-control.

*Old Hob mentions how his family abandoned him to the streets when he was a normal cat, as seen in TMNT Villains Micro-Series #3.

*Hun broke ties with the Mutanimals in TMNT (IDW) #54.

*Splinter ordered Leo and April to devise strategies to protect themselves from the mental attacks of the Pantheon in TMNT (IDW) #61.

*The Turtles left Splinter and the Foot Clan in TMNT (IDW) #64.

*The title for this issue comes from the trade paperback collection; the individual issue was untitled.

*This issue was originally published with 3 variant covers: Regular Cover by Freddie E. Williams, Subscription Cover A by Dialynas, and Incentive Cover by Ben Bishop.

This one-shot issue acts as a nice companion piece with the other Christmas issue released this month, TMNT #65.  In that way, the two issues form their own little two-parter, albeit without actually crossing over.  It’s a nice bit of thematic synergy between the two titles; a subtle two-parter that can nevertheless be read independently of one another if you feel like skipping one or the other book.  You might be left wondering “Why isn’t Hob with the Mutanimals in the TMNT ongoing?” or “Why aren’t the Mutanimals at their HQ in Universe?” but that’s a hell of a lot better than “To Be Continued in TMNT Universe #5!” or whatever.

It also complements TMNT #65 in another way.  That Christmas issue was all saccharine good times with no conflict or action to speak of.  THIS story is full of cynicism and explosions.  So if that other half of the Yuletide storyline didn’t do it for you, you’ll find your excitement on this end.

Characterization seems a little strange on Hun in this story.  He gives up without a direct fight and cowers at the sight of Leatherhead.  Strange, considering he went toe-to-toe with Slash on a couple of occasions; can’t see why Leatherhead would suddenly have him prostrating himself for mercy.  While I appreciate the angle Mowry was going for, revisiting the idea that Hun wants out of big picture crime and would prefer to make money in smalltime rackets, he comes off as uncharacteristically cowardly in his dialogue and Dialynas’ pencils.

Hun also looks a little scrawnier, but I can’t tell if that was deliberate or just the way Dialynas chose to draw him (it’s also hard to get a bead on scale since Leatherhead is so humongous).  To follow that line of thinking, though, maybe the ooze the Foot Clan gave Hun to beef him back up is wearing off?  It might explain his shrinking size and shrinking courage.  Or I could be reading into it too much.

Leatherhead rejecting Hob’s offer was a surprise; he’s been a keystone member in all other incarnations of the Mutanimals, so I was expecting him to join in this universe without much hassle.  His reasons for rejecting Hob, though spelled out in some overdone dialogue exchanges, still don’t quite sit with me.  I guess Leatherhead wishes he were still an animal and views all mutants as abominations to nature?  A sort of self-loathing scenario?  He silently looks at his reflection in a mirror and crushes it in disgust in the first few pages, so I guess that’s the deal.

The attitude doesn’t really carry over that well from his introductory arc in the ongoing; seems rather spur of the moment.  But I think I like the idea of Leatherhead being his own independent faction out to menace EVERYBODY and that certainly has more story potential than him just being a big bruiser for the Mutanimals.  It works for me, since as I mentioned in the past, I like Leatherhead as a villain more than an ally.  So if they’re going to hang onto that thread a little longer then more power to em.

This is Tomi Varga’s first full issue on colors, I think.  I like the style, as it has this very smudgy sort of look and there is no flat coloring.  The ambient lighting, especially in the warehouse, looks dusty and cold and there’s a nice bit of nuance to everything.  We’d been seeing Varga’s colors before in the back-up (and on many variant covers), but it was different seeing them attached to Sienkiewicz and Eastman pencils as opposed to Dialynas’ stuff.  Sienkiewicz and Eastman have an almost abstract style (subtract the “almost” in Sienkiewicz’s case), but Dialynas is a bit more straight forward.  So we get to see Varga’s take on how “reality” should be colored and I liked it.

And the back-up concludes.  We’d known for a while that it was going to be “all a dream”, so the ending was a foregone conclusion months ago.  I did like how they tied it into Splinter’s assignment for Leo and April in TMNT #61.  I had to go back and check the issue just to make sure, but he does indeed order Leo and April to work together to find a way to counteract the mind-control spells of Kitsune and Rat King.  So this back-up ultimately does serve a purpose to the ongoing narrative of the series, if that’s something that matters to you.  Personally, while I enjoyed the Sienkiewicz art, the gimmick of a confused Leo running into all his villains in succession got old quickly.  Hopefully the next back-up has a more structured narrative.

Ultimately, this issue was just sort of okay.  I liked the other Christmas one-shot better, but some folks may not be into the relaxed, slice-of-life take it went with.  So if you wanted an action-heavy issue for Christmas, here’s your alternative.