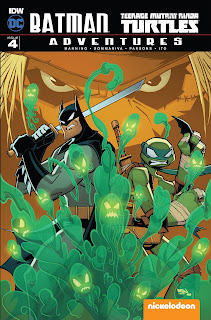 "To Laugh so not to Cry"

Down in the streets, Batman wades through crowds of people panicking from fear toxin as he pursues the Scarecrow.  The gas eventually affects him, though, and Batman sees a vision of Alfred dying at the hands of Gotham's rogues gallery.  Then Scarecrow hits him over the head with a shovel. 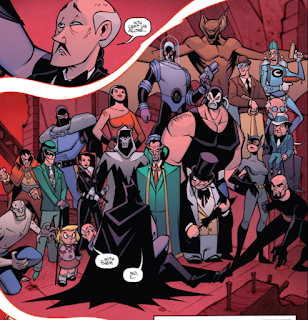 At Foot Clan HQ, the Joker receives a call from Harley Quinn, telling him that the Footbots have made enough Joker Gas to poison the whole city.

On a rooftop near two Kraang portals, Batgirl, Robin, Michelangelo and April are busy taking on more Footbots while Donatello is distracted by something.  He's found a beacon device that's been opening the portals, but the technology doesn't look Kraang in origin.  They take care of the last of the Footbots and Robin suggests that if they find the source of the smiling Footbots, they'll find the Joker.  Mikey says they know where Foot HQ is, so Robin calls Batman. 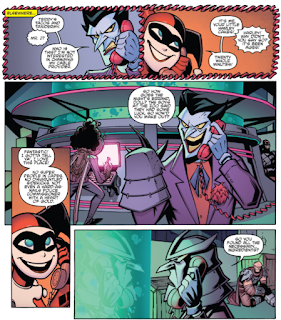 In a basement somewhere, Batman, Leonardo and Raphael are chained to the wall near a Kraang portal, each experiencing their worst fear as Scarecrow gloats over them.  The call from Robin is enough to snap Batman back to his senses and he pulls his shackles off the wall.  The Scarecrow, frightened, escapes into the portal.

In the loading dock by Foot HQ, Harley is busy ordering the Footbots to load the Joker Gas into trucks.  Batgirl and April confront her (while Don still fiddles with the beacon) and Harley unleashes the Joker's own personal mutations: Bud and Lou (formerly his pet hyenas).

In the throne room, the Joker tries to explain his plan to taint cans of peanut brittle with his Joker Gas to Baxter Stockman when Batgirl, April and Donnie bring the fight with Bud and Lou to him.  Before the other Foot Mutants can join in, Rocksteady stops them and says that after the Joker has made such a mockery of the Foot, he can fight this one on his own. 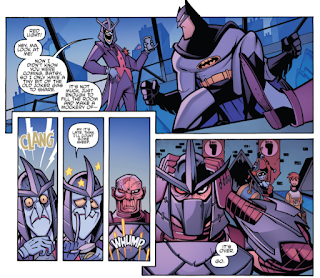 Elsewhere, Robin and Michelangelo have stayed behind to monitor the Kraang portals on the rooftop.  Batman calls, saying he's reached Foot HQ, but Leo and Raph are still messed up from the Scarecrow's fear toxin.  Batman gives them a motivating speech and together they drop in on the throne room, taking Bud and Lou out.  Helping Raph to his senses, Leo offhandedly mentions Splinter and that's enough to force the Shredder out of his Joker Gas-induced paralysis.  Bonking Joker on the head and regaining his throne, Shredder tells the Bats and the Turtles to take the clowns and leave.

Later, Donnie tells Batman what he's learned about the beacon: It's not Kraang tech.  Someone was able to tap into the Kraang's frequency and hijack their portal technology.  They've been using mind control impulses to coordinate the Arkham escapees.  Donnie asks if Batman knows anyone from Gotham who could be behind this.  Somewhere, the Mad Hatter throws himself a tea party...

*This issue was originally published with 3 variant covers: Regular Cover by Sommariva, Subscription Cover by Dustin Weaver, and Incentive Cover by Tony Fleecs.

The Scarecrow is my favorite Batman villain and for the life of me, I don't know why.  His stories all start and end the same way: He scares Batman, Batman scares him back, he goes to jail.  But I like the guy anyway, so sue me.  His part in this issue is much the usual, but it was still a thrill to see him menace Leonardo and Raphael in addition to the Caped Crusader.  His hallucinogenic fear toxin also facilitates a half-splash page showcasing the many rogues of Batman: The Animated Series, including numerous morts we never saw more than once or twice.  The Sewer King?  Baby Doll?  Lock-Up?  The Ninja?  Red Claw?  Oh shit, is that the Condiment King?

There are little gags throughout the issue that I got a kick out of, like the Joker trying on Shredder's helmet and checking out his own reflection or all the visual humor of Harley being treated like a nuisance (which is how she was portrayed in most of the Batman: The Animated Series episodes, long before she became a major mainstream character).  Bud and Lou getting mutated was a legit surprise and I'm always relieved to get hit with those in a comic, these days.  A shame they didn't talk; I had their voices from Krypto: The Superdog all ready to go in the back of my head.

And speaking of surprises, Mad Hatter being the big end boss was another one.  I suppose we're all so used to the Joker being the endgame in these things, who could really suspect that a second stringer like Mad Hatter would be the final antagonist?  Manning didn't telegraph it, either, aside from the beacons having white rabbit pictures on them (which we don't see until this issue, preserving the surprise).

If I had a few criticisms for the issue, it's in regards to a handful of dodgy-looking panels that Sommariva could have gone over a second time, I think.  Look at Page 10, Panel 3 and the awful foreshortening on Harley's arm as she's pointing at the Footbot.  Then there's the sequence where a very serious Rocksteady holds the other Foot Mutants back, wanting the Joker to pay for insulting the Foot Clan.  Wha?  The dialogue is very much written in Rocksteady's accent, so it must have been part of Manning's script, but doesn't that seem more like something Tiger Claw should have been doing?  Rocksteady's a slave of the Foot Clan; what does he care if their honor has been besmirched?  And since when do the other Foot Mutants take orders from him, anyway?

But I'm really just picking nits, here.  We're in the last leg of this miniseries and it has picked up substantially.  There are great callbacks, but the book isn't overloaded with Easter eggs in place of substance.  It's been very fun and I'm looking forward to seeing how Manning and Sommariva tie it up.