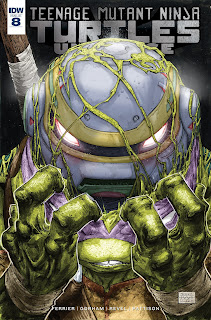 At the Central Park Zoo, Metal-Don prepares to execute Donatello.  However, he suddenly recalls his copies of Donatello's memories, specifically of the time he was nearly killed by Bebop and Rocksteady and his long road to recovery.  Freaking out, Metal-Don runs away, leaving the slightly injured Donnie behind. 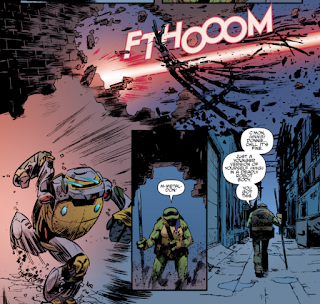 Donnie returns to the lair and recruits his brothers to help him track down and help Metal-Don.  Using a GPS tracker, they find Metal-Don's lifeless body in Harold's abandoned lab.  The lab is trashed, but security camera footage shows that Metal-Don went through a crisis of conscience between his onboard computer and his copy of Donatello's memories.  Succumbing to the computer's temptation to upgrade, Metal-Don uploaded his consciousness into one of Harold's secret projects: An upgraded version of Metalhead.  With the trail still hot, the Turtles continue tracking Metal-Don. 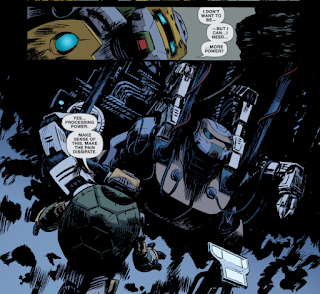 They follow him to the TCRI Building, where Metal-Don has knocked out all the guards on his way to the server room.  They find him hooking his power core up to the servers, hoping that the boost will be enough to reformat his CPU.  Donatello is afraid that the power surge will cause Metal-Don's core to explode, taking out the whole building.

The Turtles try to stop him, but he takes in enough power to initiate his self-destruct sequence.  When the countdown is finished, however, Metal-Don does not explode.  Instead, he reveals that he has purged the "virus" from his system, eliminating all of Donatello's human qualities (compassion, empathy, etc.) while retaining his intellectual abilities.  He then flies away, telling Donatello that he is no longer "Metal-Don". 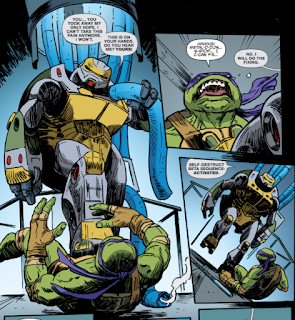 Later, the Turtles find Donatello sulking in his lab, stilling hanging out with the lifeless body of Metal-Don.  Donnie laments that he was unable to save Metal-Don (now going by "Metalhead" again), but his brothers tell him that he did all he could.  They tell Don to stop spending life contemplating existence and what is and isn't real and to live life, instead.  Agreeing, Donnie leaves his lab and joins them for patrol.

Hiding in Central Park, Jennika watches Michelangelo as he sits on a bench.

She remembers her time in prison, where she was nearly beaten to death by several inmates, including the Alpha Female with a mohawk.  She was saved by a member of the Foot Clan, who took her under her wing and taught her ninjutsu.  Together, they managed to escape the prison, but were followed by the Alpha Female.  As soon as they were out, the Alpha Female murdered Jennika's friend. 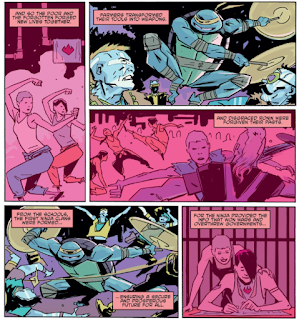 In the present, Jennika sees a woman jogging when she's approached by a cop car.  The "cops" turn out to be thugs in disguise and the woman is soon beset by an entire gang.  Mikey comes to her rescue and beats up all the thugs, only for the woman to run in fear of Mikey's appearance.

*The Turtles mention their last visit to the TCRI Building as well as their shaky alliance with Baxter Stockman from TMNT Universe #4.

So we've got another rogue Ninja Turtle out there; first it was Slash and now it's Metalhead.  You know, between Slash, Tokka and Metalhead, we've almost got enough evil Turtle characters to create a counter-team to the TMNT.  I dunno, maybe introduce Venus De Milo as a bad guy?  It'd be a more interesting take on the Dark Turtles than what Fast Forward tried to throw at us.

Anyway, I went over last review how I like Metalhead as his own unique character and not just a dumb robot, so I'm glad IDW got him to that point.  In a way, this origin is a mild throwback to Donatello's arc from the Image TMNT Volume 3 series.  If you recall, that series had Donatello nearly die, only to have his mind merge with the CPU of a cyborg, recreating his body.  He wound up at intellectual odds with the CPU, fighting over who got to be in control, occasionally being taken over by the clinical, heartless CPU.  Inevitably, they couldn't share the body so they split; the CPU getting its own robot body (and was never seen again) and Donnie getting to keep his cyborg body.

"Metalhad 2.0" is a mostly unique spin on that, but what we get is a character that starts out as a copy of Donatello's consciousness succumbing to the impulses of a CPU to discard his human elements and become a clinical, heartless robot.  I'm looking forward to seeing this new Metalhead pop back up and see what kind of a personality he's developed: How he'll talk in addition to how he acts.  Metalhead may end up behaving like an "Evil Donatello" and that could be a lot of fun.

There's a very dark undercurrent to this story that I didn't get through in my summary.  But throughout the issue, Donatello is under the impression that Metal-Don is trying to commit suicide.  It's never stated outright, but when Don sees the lifeless robot body in Harold's old lab, he immediately assumes that Metal-Don has offed himself.  Then when he sees him hooking himself up to the TCRI server, he thinks he's trying to blow himself up.  This was good setup to the self-destruct countdown, leading the reader to think that Metal-Don is out to kill himself.  And in a way, he does; he "kills" the part of him that makes him human.  But it was still a good twist.

Gorham gets more action and suspense to draw in this half of the story and so his pages pop a bit more than last time.  His layouts are very dynamic and I absolutely love the dark, heavy inking (with assists from Hixson).  This is a moody and somewhat bleak story and the visual aesthetic hits that note precisely.  He doesn't quite get humor across as well as other artists, but that has to do with his style having less of the cartoony aesthetic that other IDW artists go for.  And there isn't much levity in this script, anyway, so you won't find the lack of laughs particularly distracting.

Gorham's design for Metalhead 2.0 is bigger and chunkier, but appropriate considering the character is now (presumably) a villain.  The original Metalhead design was short and kind of cute, certainly not imposing antagonist material.  The reveal that the body was just chilling in a secret room that nobody knew about is a little... convenient, sure, but the ends justify the means.  I really DO hope they bring it up next time the Turtles interact with Harold, though.  It would be an annoying "are we never gonna talk about this?" sort of deal if no one ever asks him why the fuck he was building a giant Turtle killing machine in a secret room without telling anybody.

As for the backup, we're still getting through Jennika's origin.  I'm guessing that each installment is going to have her spying on another Turtle as she relates her back story and the origin of the ninja to us.  I'm just not really feeling this one, sorry.

"Metalhead 2.0" was a pretty dark tale that was well-paced for two-parts and got us yet another familiar face to keep an eye open for.  The next Universe arc looks to be a bit more light-hearted, if the covers are to be taken at face value, and after a story like this I think we could use the break.