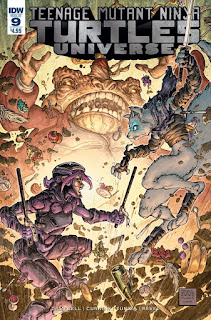 At the farm in Northampton, Alopex is meditating while Angel tries to follow Harold's written instructions on how to repair the Nobody suit.  Although she's gotten the tracking system online, Angel struggles to get anything else to work.  Alopex suggests they go for a walk in the woods to clear their heads. 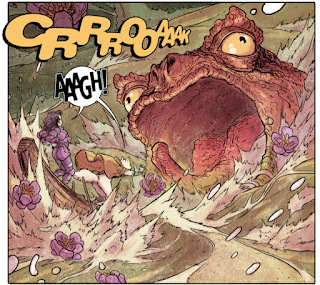 Finding a lake and an abandoned rowboat, they decide to float around for a while and discuss their place in the world.  Alopex would be happy retiring to Northampton now that she's free of Kitsune, while Angel insists that they have a greater purpose, fighting the forces of evil in New York.  Suddenly, a giant toad bursts out of the water and swallows them whole.

They find themselves in a dark building with a Middle Eastern flare to it, though the tracking system on the Nobody suit says they're still in Northampton.  Following a toad down a hallway, they're led into a banquet hall filled with strange revelers from different time periods and possibly different universes.  They pass through the crowd and find themselves in the siting room of their host: The Toad Baron. 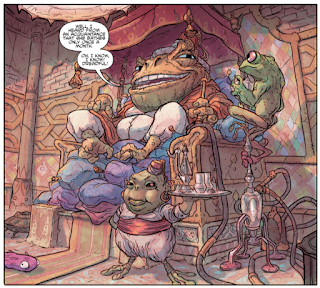 The jovial Toad Baron invites Angel and Alopex to join his party, the Feast of the Pantheon.  Evidently, he's brothers with Kitsune and the rest of her kin and it's his turn to throw their centennial shindig.  Angel and Alopex aren't keen on participating, but the Toad Baron has the power to make them violently ill whenever they displease him, so they play along.  He then orders his servants to bring in trays of food which Angel and Alopex are obliged to taste.  The food has an instantly inebriating effect and the pair wander out into the banquet hall and join the party. 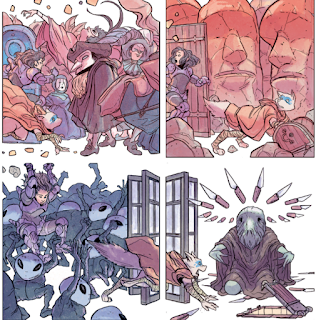 Eventually, Angel snaps out of it and helps bring Alopex to her senses.  They begin searching for a way out, but each room only opens up to a new party theme with a different congregation of guests.  Upon realizing that there's no way out of "The Den of Delights," the Toad Baron approaches them and informs that whether they like it or not, they're going to party with him forever...

In the sewers, Jennika watches Leonardo as he meditates beneath a cascade of water.

She remembers bringing news of her friend's death to the Foot Clan and the Shredder.  He inducted her into the Foot Assassins and allowed her to get revenge on the woman who killed her friend.  Jennika then embarked on a series of assassinations for the glory of the Foot Clan.

In the present, Jennika watches as a mischief of rats pours out of a tunnel and engulfs Leo.  Rather than fight them all, he lets the rats swarm over him and then leave the tunnel.  He is scratched up, but otherwise unharmed and continues his meditation. 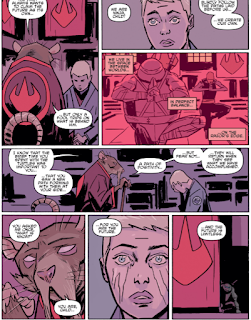 Later, she convenes with Splinter, who finishes telling her a story about the origin of the ninja and how they were once honorable warriors who were misled by greed.  Splinter tells Jennika that she is a ninja and together they will lead the Foot Clan back to the path of honor.  And once they have done that, the Turtles will see the light and return to the Clan of their own free will.  Unbeknownst to either, Leo watches their meeting from behind a tapestry.

*Alopex was rescued from Kitsune's mind-control in TMNT (IDW) #66.

I'd been wanting a story focusing on the Angel/Alopex/Harold team for what has felt like forever.  Although Harold is MIA in this arc due to extenuating circumstances from the TMNT Ongoing, I'll take what I can get!  I'd been clamoring to see Angel and Alopex hang out and better develop their dynamics, which just wasn't happening in the main title due to lack of page space; the bits we got were very compelling and like the Mutanimals, they struck me as colorful characters who could hold stories without leaning on the Turtles as a crutch.  While the absence of Harold's grouchy commentary does take some of the bite out of the team's dynamic, it'll be fun to see these two think through a dilemma on their own.

The story and script, at least this early into the arc, isn't particularly enthralling, I'll confess.  Like I said, without Harold to provide some insult comedy, Angel and Alopex are just two... friends.  Who get along swimmingly.  I'm not saying that there needs to be any antagonism between them, but you do feel like an important piece is missing throughout the first part of this story, leaving behind two buddies who don't really have anything to offer except small talk.

Their characterizations seem better expressed through the artwork; Alopex is cheerful and playful while Angel is abrasive and easily frustrated.  It seems like a reversal from earlier stories, where Alopex was the mopey bundle of nerves and Angel seemed more keen to play around and drop jokes.  I think they need to figure out which one of them wants to be Riggs and which one wants to me Murtaugh and then stick with it.

Speaking of the art, it's the killer selling point for this issue because holy cow, this Pablo Tunica dude is some hot shit.  The environments are so lush and packed with details, and while his characters are maybe a little too over-emotive (looking rather "mushy" at times), it all befits the surreal, dreamlike tone of the story.

The beginning of the issue reminded me significantly of McCollum and Anderson's TMNT (Vol. 1) #37, "Twilight of the Ring".  An effect they used in that story involved the Turtles treading deeper and deeper into the woods of Northampton, slowly crossing over into a strange, metaphysical dimension.  As the narrative progresses, the environment begins to subtly change and grow more unearthly; first in an exotic sort of way, but eventually crossing a threshold into something alien and frightening.

Tunica seemed like he was employing that method for the first act, as the woods get weirder and weirder with each panel, but at a pace that eases the characters and audience into it.  By the time Alopex notices the strange flowers and calls them out, it's too late.

And by the time they get to the Den of Delights, it's just a feast for the eyes.  Maybe it's the end result of a childhood spent with Where's Waldo books, but I love "busy" art.  Art that packs in tons of details and Easter eggs into every panel and page that constantly have you examining the work but never seeing EVERYTHING no matter how hard you try.  Every time you look back, you find something you missed.  The Den of Delights is like that, with so many weird little monsters and goofy revelers all over the place, you're going to spend a lot of time exploring the pages.  And that's good, because this comic cost five fucking dollars.

There's a superb two-page spread showcasing the party, but it was the one-page montage of Angel and Alopex trying to find a way out that I liked the most.  Each room they go in has a different kind of party in it with its own brand of weird guests, and each room has a main color palette themed to it.  It was reminiscent of "The Masque of the Red Death", where Prince Prospero holds a massive feast in a banquet hall made up of interconnecting rooms, each room themed around a different color and a different form of debauchery.  I don't know if recalling that Poe story was intentional, but it was just the vibe I got and I loved it.

And while the script doesn't do much to explore the relationship between Angel and Alopex or make their rapport very funny or interesting, again, the art and conflict sells their duo a bit better.  The parts where they get drunk and start dancing or panic to try and find a way out of the Den, it's all sold through Tunica's pencils (and lovely color work).  As a reader, you're left to... interpret their bond, more so than have it spoonfed to you via dialogue.  And, now that I think about it, I rather like that method.

The Jennika origin backup story ends and I'm as meh about it now as I was three months ago.  It tells us where Jennika came from, but the story still doesn't make her especially interesting.  She did bad things but now she wants to redeem herself.  Not too compelling.

That said, I rather liked Splinter's tone at the end; he seemed almost delusional.  Desperate to bring his sons back to him, he's certain that he'll do good with the Foot Clan and change their minds.  While there's still no certainty as to where the Splinter-leading-the-Foot arc is going to go, it almost seems like he's setting himself up for heartbreak.

Anyhow, so far this story has taught me a few things.  One: Harold is a really important piece of Team Nobody and removing him from the dynamic leaves us with two rather bland protagonists.  Two: Bland though they may be, their relationship is best when expressed through fun, energetic artwork as opposed to clumsy, meandering dialogue about career choices and what boys they have crushes on.  Three: This Toad Baron guy is a welcome break from the ponderous philosophers that have thus far populated the Pantheon.

Looking forward to the next installment, especially for the art.