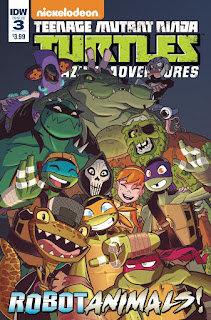 At Baxter Stockman's lab, he has Casey stuck to a wall and is assaulting April with his nano-bots.  Once he roboticizes her, he'll unleash the swarm on the world and put everyone under his control.  April fights off the mind-control attacks with her psychic powers, but is losing strength. 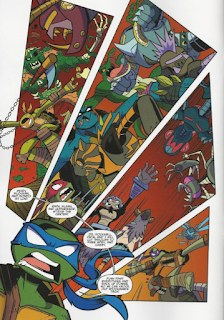 Suddenly, the Party Wagon crashes through the wall and the combined Turtles and Mutanimals attack.  Baxter has an ace up his sleeve and unleashes roboticized versions of Antrax, Scumbug, Spider-Bytez, Cockroach Terminator, the Parasitic Wasp, Tiger Claw, Rahzar, Fishface, a Squirrelanoid, Bebop and Rocksteady.  The Turtles and Mutanimals fight their way through the horde, giving Donatello enough time to hack Baxter's computer and reprogram his nano-bot swarm.  The nano-bots de-roboticize the Foot Mutants and April, returning everyone to normal. 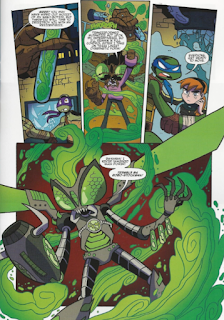 Not done yet, Baxter pulls out a vial of unaltered nano-bots and roboticizes himself into Robo-Stockman.  With his heavy armaments, he begins blasting everything in sight.  Donnie sics the de-roboticizing swarm on Robo-Stockman, but they can't return him to normal fast enough.  He then comes up with a new plan and rigs the lab's electrical equipment to cause an EMP.  Sensing what Donnie is doing, Robo-Stockman sets the whole lab to explode.  It does, but at the same time as the EMP, destroying the nano-bots once and for all.  Finding all the Foot Mutants alive but unconscious, the Turtles and Mutanimals pile into the Party Wagon and depart. 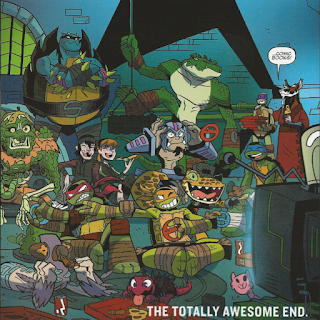 Later, down in the lair, the two teams get back to that pizza party they originally had planned.

*This story is continued from TMNT Amazing Adventures: Robotanimals #2.  This is the last comic based on the 2012 Nickelodeon TMNT cartoon that IDW will be publishing.

The Robotanimals miniseries ends about as imaginatively as it began; everything is resolved by blowing shit up.  It was fun to see Baxter Stockman quit playing lackey for a story and go all-out as a major menace, and the designs for all the robotocized characters were cool (some cooler than others), but overall the miniseries was just kind of bland.

This is the last comic based on the 2012 Nickelodeon TMNT cartoon that IDW will be publishing, according to editor Bobby Curnow.  The parting image is a nice farewell, as all the heroes of the series chill out in a big happy group shot.  It won't make you weepy or anything, but it might remind you of the good times.

And on the subject of the good times, that's what I want to focus on with this review.  I've talked at length in past reviews about where I think IDW's Nick-based TMNT comics fell short, but who really wants to hear me repeat myself?  Instead, let's talk about the things these comics did well.

First, I want to say that throughout the combined 49 issues of Nick-TMNT comics that IDW published, they never once had a bad feature artist.  Maybe some of the back-ups artists weren't so hot, but the main artists were always good, and even the worst of the back-up artists were bland-but-competent.  Dario Brizuela, Chad Thomas and Jon Sommariva were all distinct in style, but found a perfect balance between animated "cuteness" and action-oriented layouts.  All of these comics looked great and I think if they ever made it into the hands of actual kids and not pathetic 30-somethings like me, the target demographic would find them very engaging.

While the storylines were never ambitious and always episodic, the writers they got for these comics knew how to add pep and humor to the dialogue.  At times, these comics could be legit funny and I think some of the best authors in that regard were Caleb Goellner, Landry Walker, Matthew Manning and Kenny Byerly.  And the characters were always, well, in-character with their cartoon counterparts.

And I guess that's one thing that should also be pointed out: The use of characters.  The Nick cartoon isn't perfect, as much as I've enjoyed it, and one of its more irritating issues is its habit of introducing characters and then never using them again.  These comics gave us a chance to see some of those one-shot villains and allies in return performances the cartoon wouldn't give them.  Okay, so maybe I wasn't dying to see Napoleon Bonafrog again, but I actually did like Spider-Bytez quite a bit and enjoyed his two or three extra stories in these comics.

Also, those back-ups were more great than not.  In a way, they were kind of the highlight of the run, making excellent use of limited space to tell fast-paced stories with innovative gimmicks.  I think my favorites were "Instru-Mental", "Acting Out", "Tag!", and "The Adventures of Ice Cream Kitty".

IDW's Nick-TMNT comics weren't what I wanted them to be, no; they never became a TMNT Adventures sort of deal.  But for what they were, they did it well.  I'm not sure if I'll ever go back to them for anything other than the Batman crossover and some of those back-ups, or just to look over some of the art I really liked, but they're not bad kid's comics by any means.  49 issues (that read more like 50 since the Carmelo Anthony special was double-length) is a respectable body of work.  With the series over, I think it's best to stop imagining what could have been and appreciate what they did right.  And they did do a lot right.