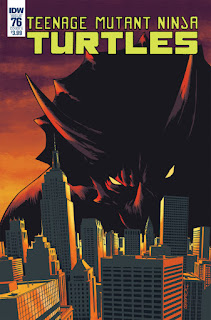 "Invasion of the Triceratons, Part 1"

The Turtles are teleported into their lair, exhausted from their adventures on Neutrino and with the "ghost guys".  They switch on the TV only to find Detective Kara Lewis telling everyone to stay indoors, as Manhattan is under attack from a "terrorist cell".  The Turtles recognize the vague figures in the news footage as the Triceratons and immediately contact April to see if she's OK.  Apparently, she went to TCRI to get help from Baxter Stockman but is currently stuck there due to the chaos.  The Turtles rush to go help her. 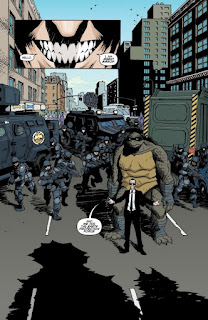 Earlier.  Commander Zom arrives with her team of Triceraton Commandos to do some advance scouting and make contact with the current species of Earthling: Human.  Zom takes to the street and tries to talk to passersby, but the people run in fear.  Agent Bishop then arrives with the Earth Protection Force in tow and asks Zom what she wants.  Zom tells him about the Triceratons' origins as Earth natives, how they were mutated into slaves for the Utrom Empire, and have returned to reclaim their homeland (peacefully). 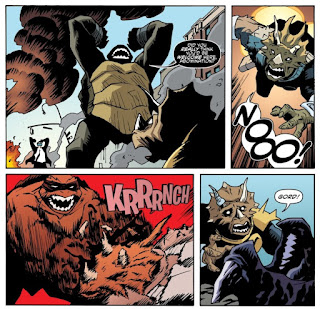 Bishop feigns friendship and cooperation, but only long enough for his EPF soldiers to take their places.  He then orders them to attack the Triceratons, who are taken by surprise.  Zom goes after Bishop in anger, but he unleashes the mind-controlled Slash on her and kills her second-in-command, Sergeant Gord.  Infuriated, Zom smashes Bishop and breaks his control over Slash.  Before she can kill him, though, she is subdued by Foot Soldiers under the command of Splinter, who insists that New York belongs to the Foot Clan.

*The Turtles finished their latest adventure with the "ghost guys" in TMNT/Ghostbusters 2 #5.

Man, I've got a lot of Triceraton invasion shit I'm falling behind on reviewing, don't I?  I'm two months behind on this issue and I'm four months behind on my review of the 2003 TMNT cartoon, where I left off in the middle of the Triceraton invasion storyline.  I'm not avoiding these stories because I hate the Triceratons or anything!  Far from it.  I've just been busy with promotions for my own books that got published back in October and I'm working on my next one.  Not enough time to criticize other people's hard work when I'm preoccupied worrying about how much my own stuff sucks!

But to get to the point, I'm liking this arc already.  The Turtles play a small role in this opening chapter, but since I love me some Triceratons AND I love me some Bishop, I didn't mind them sitting things out so much.  There isn't much to say about the Turtles yet, though I'm kind of amused that in the ongoing, they've consistently referred to the Ghostbusters as "the ghost guys".  They can't directly reference them due to licensing and trademark issues, but it's funny that they've stayed true to a vague legally approved suggestion of their identities.  It's as good as alternate branding, at this point.

The portrayal of the Triceratons in the IDW universe is an interesting change of pace.  They're a warrior race but not a war-like race, if you can discern the difference.  They want their land back, and they'll take it if they have to, but they're willing to try diplomacy first.  This is a VASTLY different take on the characters as compared to pretty much any other incarnation, where they've been soundly portrayed as villainous imperialist conquerors.  The nice thing is that this softer, cuddlier take on the Triceratons befits the origins that IDW has long established for them in their intricate mythology.  They've never been their own empire but have been used as the blunt instruments of OTHER empires.  They're eager to get their home soil back, but they aren't generic space invader monsters about it.

A bit less nuanced is IDW's version of Bishop.  Funny thing: He was introduced around the same time that the 2012 Nickelodeon cartoon brought in their own version of Bishop and the two couldn't be on further extremes from one another.  The Nick Bishop is (well, was, since that show's over) a good guy and ally to the Turtles.  IDW Bishop, though?  He's a downright evil bastard.

While I certainly prefer my Bishop to be an antagonist to the Turtles over their friend, so I prefer IDW's take to Nickelodeon's, it is a bit disappointing that he's lost much of that grey area that made the original 4Kids Bishop so fascinating.  But instead of comparing and contrasting so much, which is bound to elicit disappointment, I think I'll just savor IDW Bishop's mustache-twirling cruelty.  The cliffhanger was a solid surprise, too.  Splinter can promote that "road to Hell... good intentions" quality Bishop has lacked, I think.

I've talked about Couceiro's art before and I don't have much new to say about it.  I still like it and the battle between the EPF and the Triceraton Commandos was some exciting, kinetic stuff.  If there was any detail I noticed worth mentioning, it's that I like how he hand-letters everything in his backgrounds or on the sides of vehicles or what have you.  There's been a common trend over the past ten years for artists not to EVER draw anything if it contains a letter or a symbol, leaving the letterer to type the text in or paste a PNG over it and then use the warp tool to get it to look like it's on the same plane of existence as the artwork.  It always looks like shit.  So I appreciate that Couceiro doesn't do that.  He's a righteous dude.