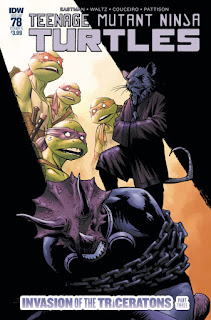 "Invasion of the Triceratons, Part 3"

24 hours later, Washington DC.  Agent Bishop has a meeting with Senator Robert Lawson to convince him to use his influence to get the EPF's request for manpower, resources and authority approved.  Senator Lawson recalls meeting Agent Bishop's father in the past and passing up on an offer to join the EPF when it was formed.  He decides to cooperate with Bishop and give him the power he needs. 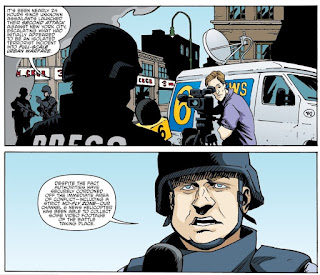 In the Second Time Around shop, Mr. and Mrs. O'Neil watch Burne Thompson's coverage of the attack on New York (and another interview with Officer Lewis, who insists the terrorists aren't aliens).  Evidently, all means on and off the island have been destroyed save for the Brooklyn Bridge.  Mr. O'Neil can't stand Burne's grandstanding and wishes the media could be more like they were when Mrs. O'Neil was a journalist.

Outside, a pair of Triceraton Commandos secure a basketball court and begin trying to clear it of homeless people who they think are "spies".  Casey Jones and the Purple Dragons show up and take on the Triceratons, setting one of them on fire.  The remaining Triceraton attacks Casey but is repelled by the sudden arrival of Hun.  Hearing the commotion, Mrs. O'Neil grabs a camera and runs outside to get footage of the fight.  The Purple Dragons subdue the last Triceraton and chain both of them up. 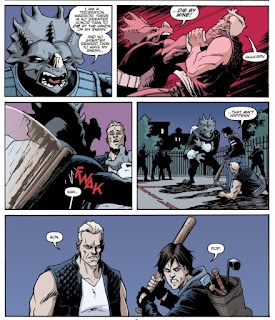 At Foot Clan HQ, the Turtles watch Mrs. O'Neil's footage that she put online, revealing the Triceratons to the world.  Really, Donatello, Raphael and Michelangelo are more upset that Splinter is having them wait outside while he talks to Leonardo in private.  They're eventually let inside and the Turtles tell Splinter about the misunderstanding with the Triceratons and how they're actually good guys. 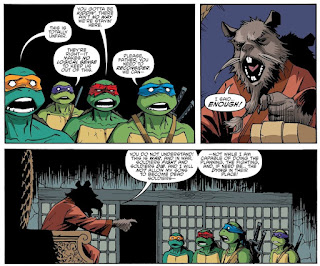 Splinter won't entertain the idea, saying that like it or not, they are at war.  He orders his sons to remain locked down in Foot Clan HQ until he and his Foot Soldiers have completed their plan and wiped out the Triceratons.  The Turtles reject the order, but Splinter insists that he will not risk losing his sons in battle.  Jennika then barges in and announces that Bishop and the EPF have returned with the United States Army.

*Burne Thompson, of course, originates from the Fred Wolf TMNT cartoon.  Though his cameraman goes unnamed in this issue, he bears such a strong resemblance to Vernon Fenwick that it's probably a safe bet to say that's him.

Oh yeah, Casey took over the Purple Dragons and turned them back into a neighborhood watch program, didn't he?  Man, he's been out of the picture for so long, I'd forgotten all about that plot point.  I don't think we've seen Casey since TMNT #65 and his being in charge of the Dragons hasn't been a thing of consequence since the issue before that.

While he's been M.I.A. in the book for over a year, Casey does make a strong comeback.  I used to complain that Casey had become IDW's punching bag, and there was a long stretch of story where he just kept getting his ass kicked issue after issue, but I think his portrayal has turned around.  He puts up a good fight against the Triceratons, using some mob-level tactics to take them down.  It was a nice compromise; obviously Casey can't out-muscle a Triceraton, and he isn't bright enough to come up with an elaborate strategy to outsmart one, so the gasoline cocktail bit was right up his alley.

Hun has been out of the story for about as long as Casey, last appearing in TMNT Universe #5 (which was a companion issue to TMNT #65) where he was portrayed as somewhat pathetic.  He also makes a solid re-entrance, fighting side by side with his son.  I mentioned it the last time he appeared, but Hun seems scrawnier than he used to be drawn.  It may just be artistic license, but I wonder if it's been deliberate, like the mutagen 'roids are wearing off and he's shriveling back down to normal?  He and Casey get along in the heat of battle and it's a distant change from how their relationship has been in the past (they've literally been trying to kill each other for a while, now).  I don't like to guess at storylines, but maybe Hun's time is running out and he wants to make amends?  His narrative has kinda reached its endpoint, anyway.

Speaking of things I'd almost forgotten, there's April's parents!  Mrs. O'Neil being an ex-journalist was something that had been brought up in the past and its used to organic effect in this story.  Burne (and maybe Vernon) making an appearance was fanwank, but what the heck, the story needed an on-scene reporter for the news segments and Burne's just as good as making up a generic character.  No harm done, really.

And then there's the Turtles, who still seem to be having a hard time getting some page space in their own comic.  I've been enjoying "Invasion of the Triceratons" a lot so far, but it is a BIG story and at times feels like it's too big for the TMNT.  The arc is halfway over and they're still struggling to find some way to not just impact the plot, but to at least be a part of it.  So far, all they've done is run around to different groups involved in the conflict, only to be ignored by every one of them.  They're like those kids at the beginning of a Frosted Flakes commercial who want to show what they can do on the court, but all the macho athletes keep dismissively telling them to beat it.  Except Tony the Tiger still hasn't shown up to give the Turtles a bowl of sugary corn so they can win The Big Game (before contracting Type II Diabetes and having their feet sawed off).

Splinter's attitude is interesting.  He doesn't want to risk losing his sons in battle, so he puts them under house arrest (basically, he grounds them).  His sons have been fighting battles for a while now, and he even dragged them into a few of their worst encounters.  Why he's suddenly drawing the line HERE is a little questionable.  He says it's because he fears for their safety, but we the readers already know that he's planning some backdoor shenanigans with Bishop; he may just not want them to interfere with what he's plotting.  I'm sure his parental concern is genuine to a point, but it can't be the sole reason he wants them to go to their rooms and stay there.

So far, "Invasion of the Triceratons" has been good, but not because of anything involving the characters this comic is named after.  It almost feels like I'm reading TMNT Universe, where the stories are about the other characters who exist in the series and the Turtles only make rare appearances.