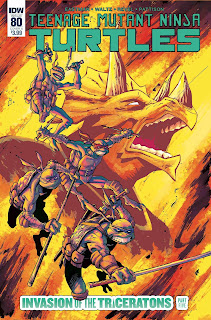 "Invasion of the Triceratons, Part 5"

As the war between the EPF and the Triceratons rages in the streets, many strange alliances are made.  Casey finds himself fighting alongside Hun, while Det. Kara Lewis is shocked when Agent Bishop shields her from fire (via the mind-controlled Slash).  Jennika, meanwhile, looks upon the carnage in absolute horror. 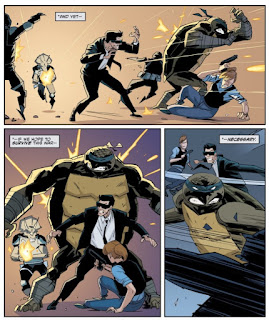 In the church, Splinter offers Commander Zom one last chance to surrender, but she refuses.  He asks his sons to stand down so that he can do what must be done, but Leonardo says that they stand with the Triceratons.  Splinter orders his Foot Elite to kill the Triceratons but only incapacitate his sons.  A fight breaks out and the Turtles eventually overcome the Elites, but not in time to save the other Triceratons.  Only Zom is left, whom Splinter paralyzes with a poisonous powder.  Before he can slit her throat, Leonardo, Donatello and Raphael try to stop him, but he defeats them all with ease.  Michelangelo then stands in his way, refusing to fight him, but also refusing to move.  Before Splinter can make a choice, Donnie receives word from April that the arrangements have been made.  The Turtles give the signal and they and Zom disappear. 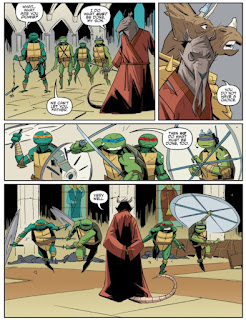 They materialize at the TCRI Building, as April had been working with Baxter Stockman to focus his teleportation array on the Triceratons.  The Turtles tell Zom that they have been in communication with Ma'Riell, leader of the Utroms on Burnow Island.  She wishes to make amends with the Triceratons for the past transgressions of the Utroms and has offered for them to come live on Burnow Island.  Due to the altered atmosphere on Burnow Island, the EPF will also be unable to further harass the Triceratons once they've relocated.  Zom accepts the terms and so Stockman teleports the remaining Triceratons, both dead and alive, to his lab.  Unfortunately, the massive alien dinosaurs wreck the place as they make their way to the teleportation platform to be sent to Burnow Island. 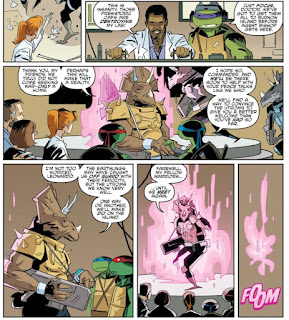 In the aftermath, Stockman is furious that the aliens have done a fortune in damages to his lab and fires April over it.  Mrs. O'Neil tells him to reconsider, as she has contacted her friends in the press.  Burne Thompson and the media then come storming in, asking Stockman how he saved the city from the Triceratons.  Flustered, Stockman begins spinning a yarn, detailing his clever scheme.  As the Turtles slip away unseen, Mr. O'Neil congratulates his daughter on her plan, though he fears that they've turned Stockman into a monster by making him a hero in the eyes of the public.  April agrees, but says that he is now "their" monster.

In the streets, Old Hob and Man Ray find a downed Triceraton craft and pilfer it for weapons.  Hob decides that if the war has already begun, the Mutanimals will need to begin expanding their ranks into a true mutant army.

*The epilogue to this arc will begin in TMNT Universe #21.

I guess before I can say anything else about this issue, I have to get the obvious out of the way: The art looks RUSHED.  And when I refer to that as "the obvious", I mean that it is OBVIOUS.  About half of this comic looks like colored thumbnails.  There isn't any other way to describe this sort of thing other than "rushed".

I mean, just see for yourselves: 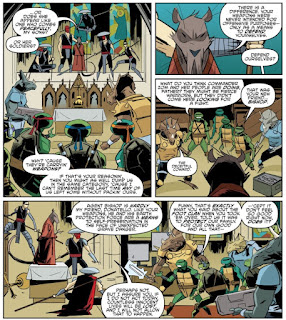 I know that the original artist for this arc, Damian Couceiro, had to leave abruptly, so I don't want to come down too hard on Brahm Revel's pencils.  Deadlines were likely closing in and the rush job was a necessary evil to get the book out on time.  I've seen Revel's other work, and while he does utilize a conservative aesthetic, he usually looks much better than this.  Sometimes, fortune dictates that you have to work fast and sometimes work sloppy just to get the job done.  And for a rush job, this is a pretty good-looking rush job.  But it's a rush job.

The bummer is that it couldn't have come at a worse time.  This is the conclusion to the whole "Invasion of the Triceratons" arc.  This was supposed to be the grand payoff.  Heck, not just to this one arc, but to over a year's worth of storytelling involving the tension between Splinter's Foot Clan and the Turtles.  THIS was the big showdown that we'd been building up to for twenty issues.  And to have it end up looking like THIS... 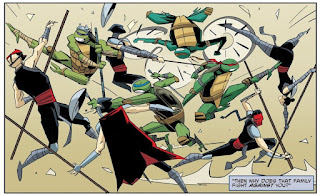 I'm sorry, but that SUCKS.  Ya fucked up.

The script isn't rushed, though, and so the story reads well.  You'll have to use your imagination to improve upon the incomplete-looking art, but the story beats are all there to help you along.  The Turtles finally going head to head with Splinter is the dramatic moment we've been waiting for, and I was so happy that the big confrontation was between Splinter and Mikey (NOT Leo), as Mikey was the one most concerned about Splinter leading the Foot since the start.  He deserved that moment more than anyone else.

The resolution did feel a bit on the convenient side.  I suppose I should take back that this is the "big" showdown between the Turtles and Splinter's Foot Clan.  It might have been, but the teleportation shenanigans postponed that.  And that's OK, since I want this arc to fester a bit more and make things REALLY strained between the TMNT and their father.

The "convenience" bothered me more in terms of resolving the Triceraton invasion.  They teleport Zom away and tell her that off-panel they've arranged for the Triceratons to go live with the Utroms.  Her immediate acceptance of the deal feels almost counter to her characterization; she's always struck me as way too prideful to back down from a fight and go hide out on Burnow Island.  There's a bit in there where they kind of use the Utroms as a lure, as it gives her an opportunity to settle the Triceratons' score with them, but that still didn't come across as enough to warrant a retreat on her part.  This was a character who a page ago was willing to sacrifice every single Triceraton in combat before accepting surrender, but suddenly she's alright with retreating because there were only 2 pages left in the issue and things needed to wrap up.

Some other story elements were seeded about during this arc, and like most ideas that this title comes up with, they look interesting but will probably take a while to bear fruit.  Casey and Hun might be patching things up and I wonder how that could even be possible considering all the times Hun straight-up tried to murder his son, but we'll see.  Hob wants to expand the ranks of the Mutanimals, which is nothing new (he's been trying to do that for years, one Playmates action figure at a time), but it looks like now he's got some stolen Triceraton tech to help him along.  Baxter Stockman becoming a media darling and celebrity hero seems the most tantalizing.  On the surface, I was expecting something akin to a Lex Luthor bad guy (public sees him as a philanthropic businessman, the heroes know he's secretly up to no good), but his currently grey allegiance could make things more interesting than that.

"Invasion of the Triceratons" ultimately fizzled out at the end.  It wasn't a short arc, either, once you factor in all the ancillary material from TMNT Universe.  I think this arc, adding in the prequel tie-in, interquel chapter, and upcoming epilogue, was ten issues.  That's a healthy sized storyline.  So to see it fumble this bad at the end is a real shame.  While the resolution to the conflict was a bit too convenient, I think a lot of this finale's shortcomings could have been forgiven had the art been... finished.

If anything, I kinda think this issue needs a "special edition" release in either the trade paperback or the TMNT IDW Collection hardcover it gets reprinted in; a version that turns these thumbnails into the completed art.  Not that I ethically approve of forcing a double-dip in that sort of way, but just speaking in terms of giving such an important moment in the narrative the due it deserves, it really does need to be redone.  Or fucking finished.