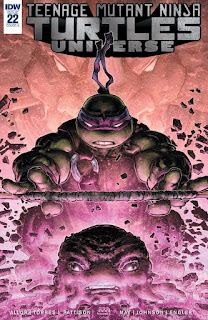 Commander Zom meets with Ma'Riell to go over the peace treaty between the Utroms and the Triceratons.  Both seem hesitant about the chances of success, given the history between their races. 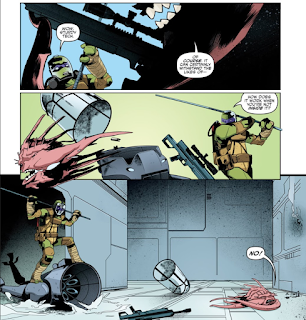 Elsewhere, Donatello hacks into the Burnow Island security systems to open the door to the armory and finds several sniper rifles missing.  Realizing Kleve is about to make his move, he confronts the rogue Utrom, disarming him and knocking him from his bubble walker.  Donnie interrogates him and realizes that Kleve does not wish to assassinate Commander Zom at the signing of the peace treaty, but Ma'Riell.

Donnie heads to a vantage point overlooking the fields where the signing will take place, expecting to find Utroms he can easily take down.  Instead, he finds the Triceratons Drel and Tarsa.  He fights a losing battle, but manages to get Drel to confess his scheme.  After Drel had failed to kill Kleve, Kleve actually came to him with his plot to assassinate Ma'Riell.  Realizing that the assassination order didn't come from Zom, Tarsa throws away his rifle. 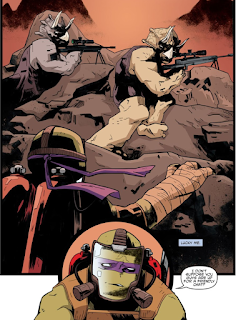 The peace treaty is signed as planned and Ma'Riell and Zom reveal that the combined science of their races has yielded the technology needed to grow food in the inhospitable soil.  Elsewhere, Kleve has come loose from his bonds and found that Donatello didn't just unlock the armory, but all the doors in the compound.

Later, Ma'Riell and Zom thank Donatello for his discretion, reveal that Drel and Tarsa have surrendered, and vow to track down Kleve.  Donnie congratulates them on getting the crops to take hold, but they confess that it was all a lie; the saplings were transplanted from a lab to create the illusion of progress.  They still have no plan in place to solve their food and space problem. 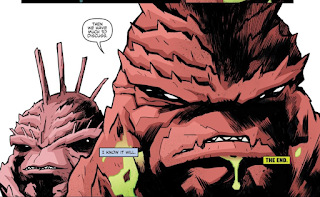 In the stasis chamber, Kleve succeeds in reviving Ch'Rell who is informed of General Krang's death.

On the shore of Burnow Island, Leatherhead makes his escape into the ocean.  He follows a white seal cub and both are attacked by a squid, mutated by the Technodrome's terraforming radiation.  Leatherhead kills the mutant squid and saves the baby seal. 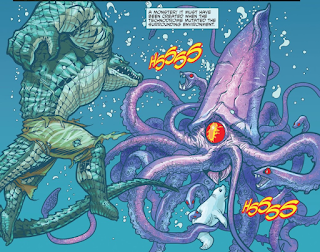 Arriving on the shores of a human city, Leatherhead sneaks into the sewers and vows that he will use his strength to protect the world from dangerous mutants and ensure that abominations like himself and the squid are never created again.

"Lost Causes" forms a solid epilogue to "Invasion of the Triceratons", ultimately succeeding in decompressing what was a very compressed conclusion to that story arc.  Allor includes plenty of political intrigue and provides a resolution that feels more like a stopgap measure to postpone further hostilities rather than solve any actual problems.  It's a dark and more-bitter-than-sweet finale to this lengthy arc, undoing the frustratingly convenient resolution of "Invasion of the Triceratons" by offering a more complex and sobering insight into how bad things really are for these characters.

It doesn't feel like anyone really wins with this one.  Zom and Ma'Riell discuss the futility of their endeavor, resort to lies to push their agenda, and all they truthfully accomplish in the end is to buy some time.  The Utroms and the Triceratons still hate each other and they STILL don't know how to make food grow without grinding each other up for fertilizer.  What they accomplish feels less like a peace treaty and more like a ceasefire.  It's dark and it's harsh, but the sort of thing this storyline needed.  Anything more hopeful would have felt insincere and inappropriate.

"Lost Causes" is a lot of political intrigue and a meta-commentary on the naive fruitlessness of believing two centuries-warring races can ever truly get along.  You can project that lesson onto whichever real world hostility suits you; I don't think Allor was picking on any specific conflict and instead making more of a general observation.  Whatever the case may be, it makes for a fascinating story built upon years of IDW mythology, though I can't say it was very action oriented.  Torres provides some good punches in the sequences that call for them (enjoyed Donnie's brief skirmish with Kleve, especially), but this is more of a suspense-thriller story than an action-adventure.  I don't see the kids flocking to this one, personally (and it was just announced that TMNT Universe will be cancelled after issue #25, so I guess they didn't).

The big stinger is the revival of Ch'Rell, whom we've been waiting anxiously for ever since his existence was revealed.  We knew this was coming, it was really just a waiting game.  Now it'll be another waiting game to see what part he plays in the grand scheme of things, if he'll take after his 4Kids counterpart and become a version of the Shredder, but at least we're past the first step to get him there.

The back-up with Leatherhead doesn't tell us anything about him that we don't already know, it just confirms his worldview and role in the IDW narrative.  He's a mutant who hates mutants and wants to destroy them all.  I guess it manages to show us that he's no longer on Burnow Island and is back in civilization, but it ultimately doesn't do a whole lot.

Be that as it may, it was nice to see Ross May back in a TMNT book.  For what the story was, Ross writes it well; he wrote one of my favorite issues of Tales of the TMNT, after all.  While this is more an affirmation of Leatherhead's philosophy and motivations, for those uninitiated with the character, Ross delivers the viewpoint well.  Chris Johnson's art and Mark Englert's colors are very nice.  That opening panel of Leatherhead on the shore is gorgeous and maybe one of my favorite images of the character.

All in all, "Lost Causes" wasn't a fun story, but it was a good story.  It helped fix a problem with the pace of the arc it acts as an epilogue to, gives us some genuine insights into the IDW Utrom/Triceraton mythology, and even moves a plot element forward at the very end.  As for TMNT Universe winding down and all the talk about that, I'll save my commentary on that for the final issue.  My thoughts won't come as a surprise to anyone, just as the cancellation didn't come as a surprise to anyone, either.