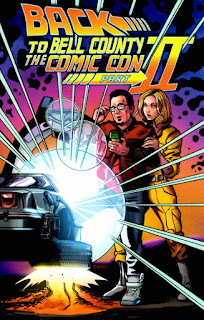 In the middle of the night, a silent alarm goes off at the Dynasty Chinese Restaurant in Temple, Texas.  Inside, Bebop and Rocksteady are scarfing down all the shrimp lo mein they can fit in their mouths.  The Turtles promptly show up, beat the Foot mutants senseless and leave them tied up for the authorities. 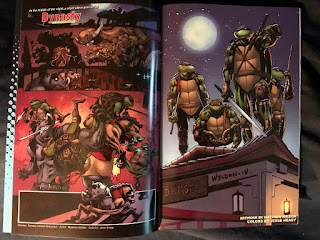 The Turtles then stand watch on the roof of the restaurant, posing dramatically.

*This promotional comic was only available at the Bell County Comic Con 2018.

*Although the contents are not official, the comics inside were written and drawn by the special guests attending the con.  Dynasty Chinese Restaurant sponsored the TMNT comic and is a real restaurant located in Temple, Texas.

*That said, Kevin and Courtney Eastman, special guests at the con, approved the use of their likenesses for the cover and Eastman even made copies available on his website for fans.

Such a little thing to review, I know, but I had a lot of fun at Bell County Comic Con last weekend, so I might as well cover it.

It's a short comic, but Weldon's art is nicely laid out and just a little cartoony on some of the expressions to make it funny in pantomime.  Jesse Heagy's colors remind me of the Digital Webbing Presents TMNT short, which has longtime been a favorite Turtle short strip of mine.  Not too much else to say about it other than that I met Matthew Weldon, he's a real good guy, and he signed my copy (photographed above).  His signature drawings of cats are great, but I'd also recommend giving his Indiegogo comic Punchline a looksee.  The art and colors on it are gorgeous.

As for Dynasty, the restaurant that sponsored this comic, I can say that I have eaten there twice and loved it both times.  Lots of space, huge buffet, and also Danny Trejo and Sam Jones were there when I went after the show, making my meal particularly surreal.

I had a booth at Bell County again this year, the Ninjaink booth which I work with my buddy Tim Lim (who did the cover of Kevin and Courtney Eastman), and so from that standpoint I can say that the concept of this collectible program booklet was brilliant.  Handed out to every visitor at the show, they were challenged to find each of the creators in the book, who were guests and had booths, to get their pages signed.  It drove a lot of traffic to our booths, particularly from people who may otherwise have never thought to stop by and see us.  It's a gimmick more cons should consider implementing (it also makes the programs feel more collectible to the visitors and they're less likely to throw them away as soon as they get home).

By the looks of it, each pin-up or short comic in the program was done by a guest at the comic, but also promoted one of the con's sponsors.  Some were very direct with their advertising, such as the TMNT and Batman ones, while others were a bit more discrete (Jon Malin's Cable and X-Force one keeps the Acer Predator ad on a TV in the background).  To be honest, I LIKED the bewildering product endorsement strips; reminded me of those Hostess comic-ads they had in Spider-Man books back in the day.

Anyhow, Bell County was a blast.  Got to meet Steve Lavigne for the first time and talk to him about video games for a good stretch (while getting our food at Dynasty, incidentally).  Also got to talk to Eastman and Courtney again, and they're always the nicest people.  Hope to do it again next year!