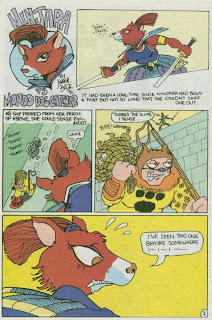 While prowling the rooftops of New York, Ninjara smells the scent of the thief she’s been trailing. She spots a man in a weird dog costume carrying a sack of helpless canines and recognizes him, instantly. 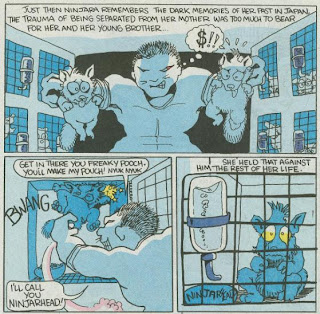 She recalls the days before she was mutated, when she was just an ordinary fox pup. She and her brother (Naga) were captured by a cruel dog catcher, who locked them away in a kennel to sell them to unscrupulous individuals. An evil man, the dog catcher tormented her by calling her “Ninjarhead” (a name that ended up sticking).

Ninjara leaps down into the alley to confront the man, now going by the identity of Mondo Dog Catcher. He recognizes “Ninjarhead” and taunts her before escaping into the sewers. Ninjara follows, but is attacked by his trained Dobermans. Defeating the guard dogs with ease, she sneaks into her prey's secret underground base, where lots of helpless pups are being held captive. Undeterred, Mondo Dog Catcher unleashes a dozen rabid Chihuahuas that chase Ninjara up a cage, where she loses her swords. 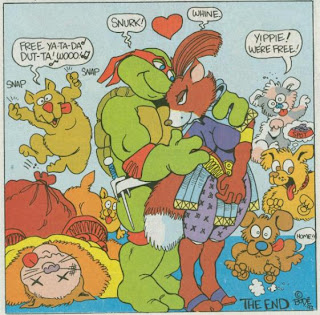 Trapped, Ninjara begins to wonder where her boyfriend, Raphael, has gone. Mondo Dog Catcher schemes to sell Ninjara to the highest bidder when Raph bursts in through a skylight and beats the tar out of him. Raph then sucks up all the rabid Chihuahuas with a Kookaracha Mini-Vac. Together, he and Ninjara free all the grateful dogs who can’t wait to go home to their families.

*Ninjara recalls having been an ordinary fox that was mutated. This conflicts completely and irreconcilably with her origin as given in TMNT Adventures #29, where she vehemently explains that she is no mutant, but from an ancient race of anthropomorphic foxes. Because of this discrepancy, “Ninjara vs. Mondo Dog Catcher” has to be considered a non-canon story.

*This story was completed in 1992, but for whatever reason there were delays keeping it from being published until 1994. That means its creation predates Naga's first appearance in TMNT Adventures #46 by a year.

Mark Bode’ is a cartoonist whose style I’ve always liked even if his sense of humor wasn’t always to my liking. I’ll admit that I haven’t read much of his stuff beyond his collaborations with Mirage or Heavy Metal, so I can’t accurately judge the guy’s whole career. Whatever the case, his style is definitely cute and expressive and he’s got a talent for animated layouts.

An unashamedly silly romp, this story is what it is. I don’t mind the comedy back-ups all that much and I kinda wish the TMNT Adventures ongoing had included more of them (they seemed to segregate most of their “comedy” for the Specials rather than balancing the drama with the humor between publications). The completely wrong origin for Ninjara is kind of strange, as Bode’ made the effort to remember that Ninjara has a younger brother but somehow missed the fact that they’re part of an ancient race of fox-people, not mutants. Still, the panel of baby fox Ninjara huddled in her cage, crying, is both cute and saddening at the same time.

Though what the hell’s a skylight doing in a sewer?

Grade: N/A (as in, “Now you may think Mondo Dog Catcher’s costume is stupid, but just take a look at most of Playmates’ output from the 80s and early 90s. He’d have fit right in”.)
Posted by TMNT Entity at 1:21 PM