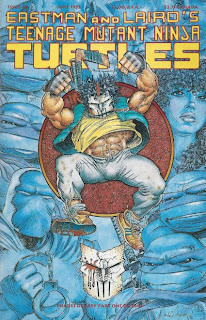 “Shades of Gray, Part One of Two”

At the farmhouse, Leo, Mike and Raph get ready for their next training exercise.  Casey has been given a 3-hour head start in nearby Springfield and the Turtles have until 1am to find him (or else they walk home).  Don asks Splinter if he can stay behind and finish up a computer project.  Splinter gives Don permission to stay, then asks April if she’s ready to drop the Turtles off.  April finishes circling an ad in the classifieds and grabs her purse. 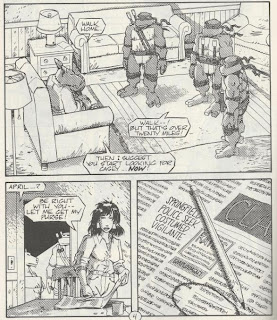 April drops the Turtles off by an overpass and then starts heading home.  She doesn’t make it far before the old pickup truck breaks down.  A man on a motorcycle stops by and asks if she needs any assistance.

Meanwhile, the Turtles discuss how they’re going to find Casey.  Raph suggests they locate his precious Chevy and then guard it until Casey returns.  The Turtles track down the Chevy in a parking lot and keep a vigil, unaware that Casey has predicted their strategy and is watching them in secret. 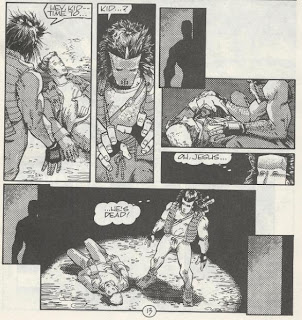 Casey tries to put some distance between himself and the Turtles, running into the Central Street playground.  He’s stopped by a trio of three teenage punks who demand he fork over all his money.  Casey puts the hurt on them, sending two of the kids into retreat.  The third attacks him with a knife and Casey bashes him over the head with his hockey stick.  The kid goes down and doesn’t get back up.  Casey checks his vitals and finds that the boy is dead.

Suddenly, Casey is attacked from behind by the vigilante named Nobody.  Nobody happened upon the scene in time to see Casey hovering over the dead body and presumes a murder.  Casey and Nobody got at it and eventually Casey makes a break for it.  He loses nobody when the vigilante’s cape gets snagged on a swing set and takes refuge in a graveyard.  Casey discards his hockey mask, enraged at himself for killing a kid.  Nobody then catches up with him. 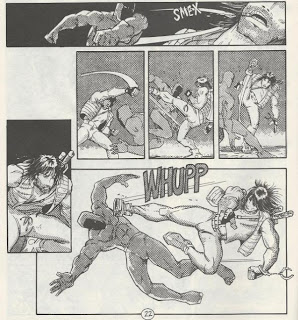 Down the street, the Turtles see the two punks running and decide to see what’s up.  They find the dead kid in the playground as well as the broken end of Casey’s hockey stick.  They follow the trail of the chase and enter the graveyard.  Nobody and Casey are still going at it, but Casey eventually loses the fight and Nobody prepares to take him into custody.  The Turtles demand that Nobody set their friend loose and Nobody tells them that Casey murdered a kid.  Casey solemnly explains that it was in self defense and was an accident.  Nobody, being a cop, says that Casey will have to answer for that in court, but Raph reminds Nobody of the time he killed the arms dealers in the helicopter on their first team-up.  Nobody reluctantly hands Casey over to them and the Turtles promise that he’ll answer for whatever he’s guilty of.

As they exit the graveyard, Casey leaves his hockey mask discarded on the ground.

*The Turtles last met Nobody in the untitled Nobody story published in the 1989 Tales of the TMNT Collected Edition.

*The cover titles this story as “Shades of Grey” but the title page spells it “Shades of Gray”.  The next issue uses the “Gray” spelling on both the cover and the title page, leading me to assume that “Gray” was the intended spelling.

“Shades of Gray” is one of the most eye-opening arcs in all of Mirage’s TMNT library, turning various action movie and superhero tropes on their heads and challenging readers to completely reevaluate their interpretations of certain characters.

Watching Casey take on muggers and purse-snatchers has always been a lot of fun, as he chugs a couple brews with Raph then goes out and wails on skulls with baseball bats and hockey sticks.  It’s all pure fantasy and escapism.  “Shades of Gray” briefly deposits the characters in the real world, where a blow upside the head from a hockey stick is more than enough to kill anybody.  We’re all so used to seeing the “action movie” physics in these comics, where a punch to the face harmlessly knocks a foe out cold for only a few hours or a gunshot to the shoulder is but the most minor of flesh wounds, that witnessing the actual fallout of severe head trauma is a sobering shock.  Seeing Casey at the end, his head lowered in shame, the Turtles having to take responsibility for him… It takes the hardcore “badass” character and turns him into a remorseful child.  All he can say to defend himself is, “It was an accident”.

In a lot of ways, “Shades of Gray” feels like the moment when Mirage’s TMNT comic finally “grows up”.  When it began, it was a crude parody of Daredevil and X-Men which wound up becoming its own thing.  The book embraced gratuitous and juvenile violence and glorified grim and gritty “badass” characters, with that aspect being perhaps best encapsulated in the character of Casey Jones.  He’s a guy who drinks all day and beats up crooks all night.  And so it went.

“Shades of Gray” looks at that lifestyle and characterization from an adult perspective.  What are the consequences for when you bash a thug’s skull in with a baseball bat?  How effective is vigilante justice REALLY when you’re trampling all over a crime scene and can’t offer eye witness testimony because you have to keep your identity a secret?  Is killing an arms dealer with a bazooka any less shameful than killing a knife-wielding thug in self-defense?  The second half of “Shades of Gray” delves into these matters even deeper, particularly Casey’s hardcore drinking, and really puts the “Outlaw Hero’s” defects under a microscope.

“Shades of Gray” also sets up some of the character arcs prevalent during the “City at War” epic, making it a necessary prelude to that event.  Mostly, it gets the ball rolling on April and Casey’s individual arcs, as they are also made to “grow up” within the confines of the story.  Casey is forced in the worst possible way to realize the folly of drinking all day and fighting all night.  April, as is merely hinted at in this issue, has the heart-breaking epiphany that her life is being wasted, piddling around at a farmhouse in the middle of nowhere.

With “Shades of Gray”, both the plots and the characters mature and move on.  While the “fun” is definitely behind us, now, I guess we sort of got that out of our systems with the guest era, which consisted almost entirely of goofy stories and one-shots with no long term consequences.  “Shades of Gray” and subsequently “City at War” are exactly what this book needed, joyless though they may be.

Sort of like your parents kicking you out of the house and telling you it’s time to grow up.

Grade: A (as in, “And Nobody learns an important lesson about capes, too.  He’d have learned it sooner if he’d read Watchmen, though”.)
Posted by Mark Pellegrini at 12:47 PM