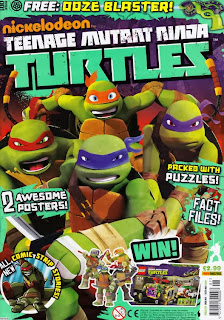 Originally published by: Panini Magazines
Publication date: May 2 - May 29, 2013

*These comics take place within the universe of the Nickelodeon TMNT animated series.  How they fit or IF they fit between episodes is anybody’s guess.

*The “How It All Began” intro page is featured in every issue of the magazine, so I'm only gonna cover it in the first review.

*These Panini reviews only cover the comic strip content.  TMNT Magazine is a full magazine and each issue features games, puzzles, sweepstakes and other content.

*Thus far, these comics from Panini have only been published in the UK and other parts of Europe.  None have been printed in the United States.

Posted by Mark Pellegrini at 1:13 PM

Actually the "How it all began" part is in 6 too. I just got tired of scanning it :p So it's in all the magazines

Thanks for the clarification. Fixed me note!