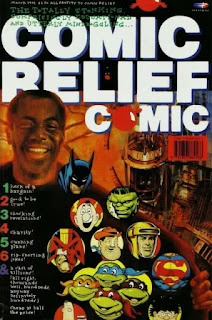 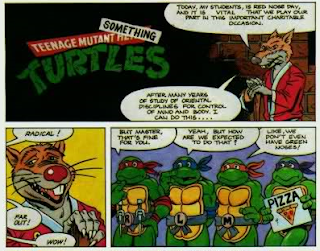 Down in the sewer lair, Splinter gathers his pupils to show them a mind-over-body discipline he took years to master.  Through decades of practice, he reveals that he's able to turn his nose red at will.

Leonardo, Raphael and Michelangelo marvel at the technique, but lament that they wouldn't be able to master it no matter how hard they tried, seeing as they don't have noses to begin with.  Donatello has an epiphany, and borrowing Raph's sais, he messily chops a pizza to pieces.  The sauce splatters onto their beaks, giving the Turtles the appearance of red noses. 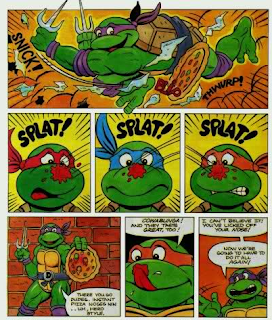 Unfortunately, the "noses" are too tasty to resist and the Turtles proceed to lick the sauce off and then reapply it, making a huge mess.  Splinter informs the audience that an easier and cleaner method of mastering the technique would be to go out and buy a Comic Relief red nose.  He then introduces the next segment, something about "Africa".

*Special thanks to "Wilddiverse" of The Technodrome Forums for sharing the TMNT pages of this special with me.

*This special was published as part of a charity drive coordinated by the Comic Relief foundation.  The red clown noses seen in the story were also available for sale, with proceeds going to the charity.

*This special contained a staggering number of licensed characters from different rights holders, many of which I've never heard of.  Titles involved include Batman, Superman, the Incredible Hulk, Dan Dare, Doctor Who, Judge Dredd, Dennis the Menace, Beano, RoboCop, Blackadder, and maybe more.

*The credits page lists everyone involved in the special, but does not distinguish who did what.  Curtis, Gaiman and Morrison are credited with the special's plot, but the individual script writers, artists, colorists and letterers are all lumped together, so I dunno who wrote or drew the TMNT story in particular.

*Oddly, Kevin Eastman is given a special thanks credit but Peter Laird is not.

Apparently, this thing is legendary.  But I'm not British, so this is the first I've heard of it.

The credits page for the special is pretty unique, featuring a butler announcing all the creators in a verbose manner whilst being yelled at by his master, "Mr. Blackadder" (like, from the TV series?  I don't know).  It's a neat gimmick, but it also means that I can't tell who wrote or drew what.  The credits might have been intuitive to anyone reading all the British publications included in this special at the time, but with Fleetway constantly using different creators on their licensed TMNT comic, it's not so easy to determine who did what by name alone.

Apparently, this special included strips by every big name working in the UK comics scene at the time.  Gaiman, Ennis, Morrison, Millar, Bisley, McKean... Pretty much every big UK name except Alan "Comic Books Were a Mistake" Moore, who was probably too grouchy to participate in something as mollycoddling and saccharine as a charity.

The two-page TMNT story is, I dunno, kinda dumb?  But it was a quick gag strip amid what I assume was a comic made up entirely of such things, so it probably fit in just fine when context is accounted for.  The story opens with the hosts arguing over whether they're called the "Ninja Turtles" or the "Hero Turtles", which was a relevant issue at the time.  The UK has since abandoned their ban on the word "ninja" (and the frightful concept of nunchakus), so it's a non-issue, now.

Anyway, I sort of feel like I'm missing out, only having the TMNT pages to read, but I'm grateful to have them over nothing.  The lineup of creators is pretty enticing; some of them during their prime (Gaiman), some when they were just starting to hit their stride (Ennis) and some several years before they hit it big (Millar).  I don't know if the thing goes for big bucks on the aftermarket, but I assume it does, given how it likely won't ever be reprinted due to all the varying rights issues.

I guess I'll never know what happens in that RoboCop strip.

Posted by Mark Pellegrini at 9:13 AM

Comic Relief, in the UK known for its so-called Red Nose Day, is the biggest annual British charity event. There are special TV programmes and star-studded segments created for this occasion, and every year famous singers, comedians and TV personalities record a song for Comic Relief, mostly a cover version of a well-known tune or a novelty song (notable examples are 'Living Doll' by Cliff Richard & The Young Ones, 'I Got You Babe' by Patsy Kensit, and 'Walk This Way' by Sugababes vs Girls Aloud, as well as exclusive to the UK Red Nose videos for songs by Spice Girls, The Proclaimers and Tony Christie).

Every big name in British media is involved in Comic Relief, so it isn't strange that a magazine publication of the brand would have the same allure, even it the quality of the material isn't up to par with the televised content. This thing is probably aimed at kids of various ages, so it is mostly a way of explaining even the cool cartoon characters are into the charity event. I do wonder if Splinter's ability to color his nose red is canon in the Fleetway comics...

Also, it's kind of funny they discussed the Hero/Ninja subject at the height of Turtlemania, since the violence in the 1991 movie was nearly absent and the cartoon series were practically neutered of anything ninja at the time, especially in the UK and Germany. I bet this thing is mostly rare because people threw it out after the event, but I bet in the UK you could find this thing in flea markets quite easily.

In the book "Alan Moore: Storyteller", Alan Moore reveals that he did work for this comic uncredited.

And Neil Gaiman has stated several times that he wrote the Turtles segment (his son was a big fan of the characters at the time).

There are some copies of this floating around eBay UK:

You can read the whole thing here http://twoheadedthingies.blogspot.com/2013/03/charity-gubbins.html