Next Mutation, Part 5 review is up at AIPT! (and the Power Rangers crossover is there, too) 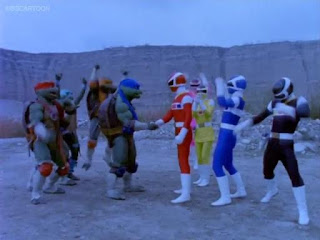 I cap off my review series of Ninja Turtles: The Next Mutation with the last 5 episodes plus the Power Rangers in Space crossover (over at AIPT).

While I think Next Mutation is actually an amusing show in small doses, that last stretch of episodes was pretty pitiful as you could tell they'd run almost completely out of money.  The Power Rangers in Space crossover was real fuckin neat-o, though, and that's coming from someone who isn't all that into Power Rangers.

Well, with that over with, I can move on to the 2003 TMNT cartoon from 4Kids.  Haven't seen an episode of that since 2009.  Hopefully it holds up to how I remember it, because I remember it being really freakin' good.

Haven't watched an episode of 2k3 in 7 years? And probably the first seasons longer than that?

You're in for a treat. Man, you need to marathon old shows more often, not just for reviews, but for your own entertainment.

I think the last time I watched anything 2k3 related was when I wrote my Turtles Forever review, which was 2011, so it's only been 5 years now that I look at it (feels a lot longer).

I remember 2k3 very well since I wasn't a little kid when it first aired, though I never actually watched all the episode in chronological order (thanks to the DVDs jumbling the episodes up and the seasons getting released out of order when season 5 got shelved for a few years). So I'm looking forward to watching the show the way it was "meant" to be watched for the first time.

Likewise, it'll probably be a few years knowing my pace, but I never actually sat through all of Back to the Sewers (I gave up partway through because I really didn't like it at the time). So I've at least got some genuinely new-to-me material waiting at the very end.

If we so wanted to we could assume that at the end of "who needs her" Venus successfully killed the rank entirely of screen.

Maybe you could review Cartoon All-Stars to the Rescue and the Chaotic special that guest starred the Turtles?

For your 2003 reviews, you should be warned that you are in for a world of hurt when you get to Fast Forward and Back to the Sewers.

Fast Forward isn't that bad, and some of its episodes are truly great, its just a noticeable change in tone and has worse animation than what came before. Also many of its villains were better than the unique 2k3 villains this show created in its first four seasons.

I never knew they went so far as to have a crossover between Power Rangers. That would certainly turn me off of the series had I continued past episode 1.

As for the 2K3 series, I think I remember the first two or three seasons being alright. It got pretty ridiculous yet at the same time not very interesting past that point.

The newest take on the turtles consistently remains interesting, funny, relevant, etc. I think I enjoy it most of all the runs of the Turtles.

@mechaMenace I know, right? :D So many elements from different parts of the TMNT franchise are being reused and reimagined. I love it.