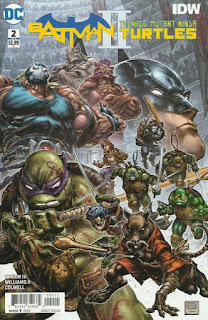 Gotham City, a week later.  Batman tracks down Ra's Al Ghul and the villain agrees to give Batman a rare component needed to reconstruct the multiversal teleporter.  Batman asks why he's cooperating and Ra's explains that having both Bane and Batman out of Gotham would be to his liking.  Elsewhere, Donatello and Robin take down Mr. Freeze and find the last component they need within his ice cannon. 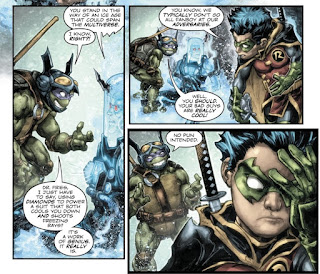 At Wayne Enterprises, Lucius Fox and Batgirl help put the finishing touches on the teleporter.  Batman leaves Batgirl in charge of watching over Gotham while he fetches Bane.  She says that she'll keep the portal on a timer so that it will only open for 1 minute a day, that way no one from Gotham can use it to slip through.  Donnie apologizes for everything being his fault just because he wanted to be stronger.  Batman tells him that there's nothing wrong with wanting to be stronger, but Donnie needs to do it on his own terms and not to satisfy others.  With that, Donnie, Batman and Robin enter the portal.  They arrive in New York City to find the whole place on fire and in the midst of a badly escalated gang war. 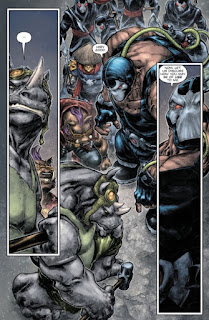 The Lower East Side.  A wounded Foot Soldier reports back to Bebop and Rocksteady and explains that the other two Foot factions have yielded and devoted themselves to Bane's leadership.  The two mutants decide to go teach Bane a lesson, but find him and the whole Foot Clan waiting for them.  Changing their minds, they kneel to Bane. 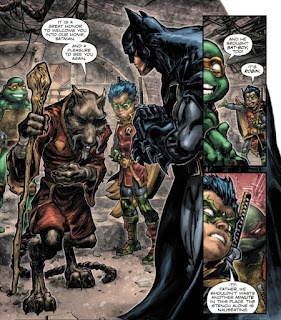 Down in the sewers, Raphael, Leonardo, April and Casey help a slightly wounded (sprained ankle) Michelangelo back to the lair.  They find Batman, Robin and Donnie waiting for them, much to their relief.  Everyone is happy to have Donnie back until Robin lets slip that Donnie is the reason Bane is in their universe to begin with.  Raph, enraged picks a fight with Donnie until Splinter calls him off.  The Turtles then put their heads together with Batman and look over some recon footage of Bane that April took.  They find the tank of Venom on his back and realize that its almost empty.  Better yet, the element used to create Venom does not exist in this dimension, so Bane cannot get more.  Batman suggests they strike when Bane is going through the super steroid's withdrawal symptoms. 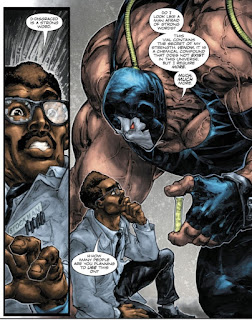 At Foot Clan HQ, Bebop and Rocksteady bring the captured Baxter Stockman before Bane.  Bane orders Stockman to synthesize a fresh batch of Venom for him; a batch big enough to affect the entire city.

The mixing and matching of continuity elements for this story is sort of fun to pick out if you're a fan, or maybe a little irritating if you crave some sort of canonical consistency.  Like, Mr. Freeze has his stupid New 52 mohawk and I wish that would go away forever (along with his awful new origin wherein Nora was never his wife and he was just a delusional creep).  Bane, though, seems to be a throwback to the old '90s continuity that birthed him.  In a way, it comes off like character regression.  Unless something changed after Flashpoint (and it probably did), Bane hasn't needed Venom in a long time and evolved past using the steroid to find his strength.  And that was good, because Venom acted as a weakpoint more than a boost for the villain, giving the heroes an obvious target to take him out in battle.

Here, the Venom is back and Bane seems to be a slave to it again.  It's sort of a simplification for the character that I found disappointing; Bane's strength actually comes from his intelligence and not his physical prowess (there are many villains, even Batman villains, who are physically stronger than Bane).  Then again, that seems to be what Tynion is setting up for Donatello's arc, isn't it?  Donnie's strength is his intellect, not his physical acumen, but he wants to get more powerful to match up with his brothers on the battlefield.  I haven't been checking the solicits because I try not to spoil storylines for myself, but I'm going to go out on a limb and assume he's going to get addicted to Venom very soon, isn't he?

So we're going to get this comparison between Donnie and Bane, both brilliant and clever, who use a steroid to try and make themselves stronger.  Donnie is sure to learn a lesson about taking the easy way and how drugs are bad and if he keeps going he'll end up an addicted monster just like Bane.  Boy, I hope the miniseries' story arc isn't as telegraphed as I'm presuming it is, otherwise I could save myself about $16 and stop here.

The problem isn't so much the lesson Tynion seems to be building toward, but that he's had to kneecap a couple of characters to facilitate it.  So in this mini, Donatello is a weak link on the battlefield and gets shit on by every other character for being unable to fight on their level.  And Bane has been rolled back to 1993 and is hooked on Venom again so he can provide juxtaposition with Donnie's dilemma.  I dunno, it just feels like if you have to regress characters to make them learn something, then it wasn't a lesson they needed to learn in the first place.

ALL THAT ASIDE, there is some interesting stuff being built up in this mini.  And all sorts of little details, too.  I love Bane's hijacked version of the Foot Clan insignia, painting his luchador mask skull over the red tengu claw.  Bane seizing the Foot Clan in general is an interesting story element and I'm left wondering what his grand scheme is (though no doubt infecting the city with Venom will be how Donnie gets a taste).

Currently, we're two issues in and I AM making a lot of assumptions about the plot direction and the character arcs.  I could end up being surprised.  But I think my real grievance is that Donnie is still getting shit on a LOT.  By everyone.  And even though he isn't my favorite Turtle by a longshot, at two issues I'm already sick of it.

Posted by Mark Pellegrini at 4:52 PM

I, on the other hand, live for looking at cover and issue solicits as soon as they go online. And I totally think your predictions are spot-on! According to this interview, it sounds like Freddie Williams REALLY loves drawing bulging muscles and sinew. What's more 90s than that?
https://www.newsarama.com/37582-batman-tmnt-ii-s-freddie-williams-ii-loves-drawing-muscles-sinew-hey-there-s-bane.html

First, it is awesome seeing Batman as this father or big brothers figure that tries to teach the Turtles lessons and moral values in the battlefield. Ever since the first cross-over, it feels that Batman loves being a mentor to those interested in stopping crime. I am so glad they did not choose the All-Star Batman mentor figure. He would have had Donnie chug down a few rats and abused him a bit before even talking to him.

Second, I love how they make Bane this intimidating figure mentally. Bane is a strategist before he was this hulking brute and the issue represents that well. Especially with Ra's Al-Ghul acknowledging how he prefers Bane out of Gotham.

Yeah, it feels that your prediction is correct and I hate seeing such an interesting set-up go to waste with Donnie abusing Venom and Bane having his Achilles heel be the lack of Venom. It is just so predictable.

I felt that Bebop and Rocksteady should have attempted at taking down Bane. It would have been fun to watch. Also, they have taken down a lot more than they usually do. I wonder why they didn't try?

Who typically is your favorite turtle?