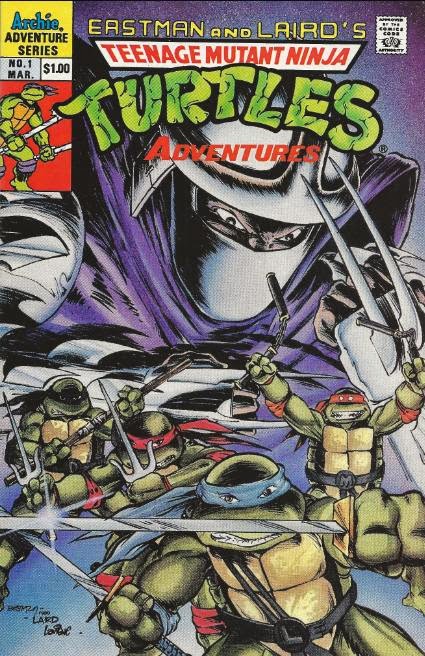 “Return of the Shredder Part I” 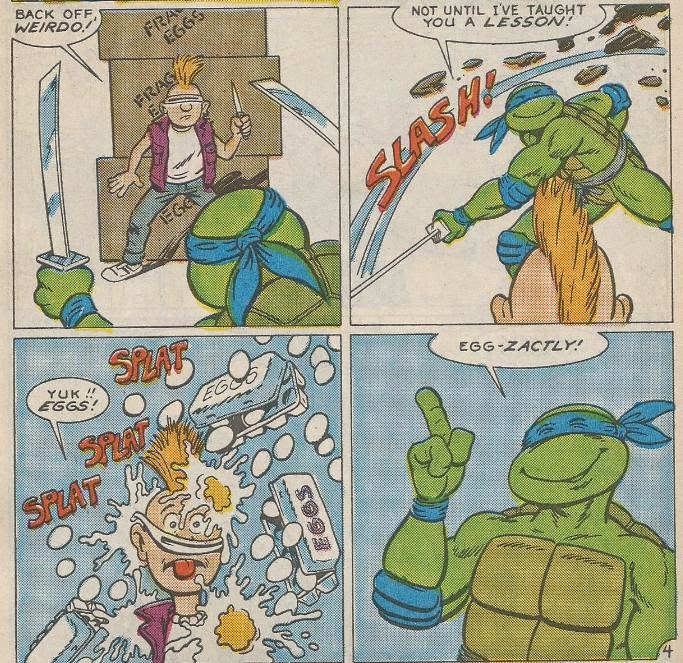 Mike and Leo are out shopping for groceries when they encounter a pair of punk-rocker hooligans. They make short work of them and, as a reward, they get their groceries for free! April interviews the blonde airhead whom they rescued at the store, and while she’s grateful they saved her life, she proves incapable of differentiating between turtles, alligators and salamanders. Back at the Turtles’ Lair, Splinter sits in deep meditation as the Turtles chow down on pizza, relieved that Shredder and Krang are trapped in Dimension X. 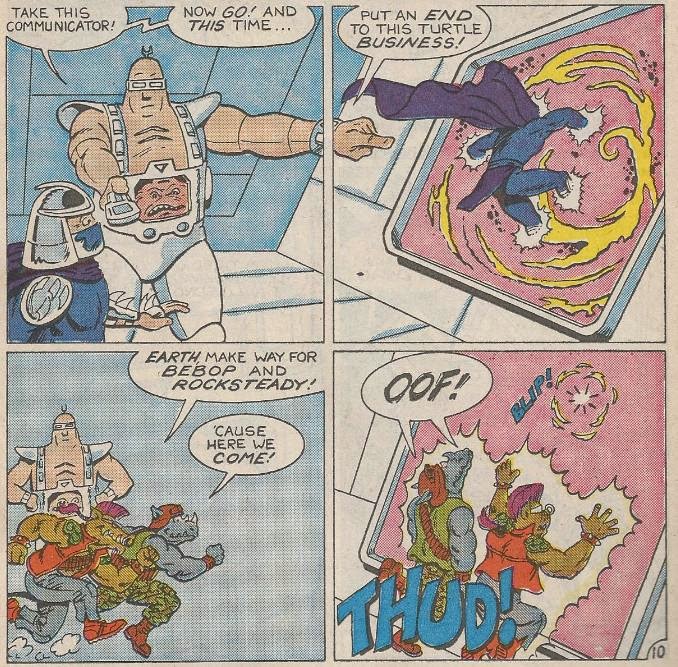 In Dimension X, within the Technodrome, Shredder begs Krang to send him back to Earth. Krang sends him on his way, but forces Bebop and Rocksteady to stay in Dimension X, as he enjoys watching them suffer too much to let them leave. 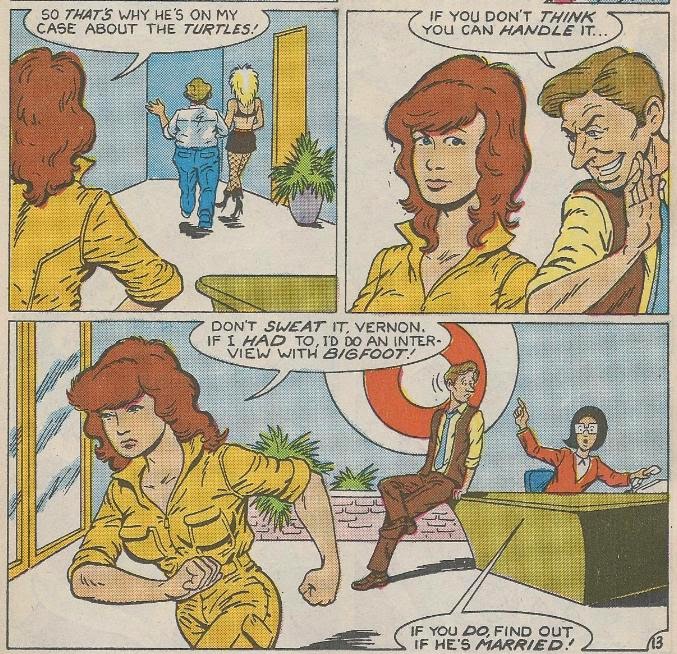 At the Channel 6 offices, April shoots the breeze with the boy-crazy nerd-chick, Irma, while simultaneously feuding with her rival, the self-obsessed Vernon. Burne, their boss, interrupts. He demands April change her slant on the Turtles and label them as criminals. This new change in heart apparently stems from his busty new girlfriend, Tiffany, who seems to hate turtles. Back at the Lair, Splinter comes out of his meditation, now suddenly aware that the Shredder has returned. 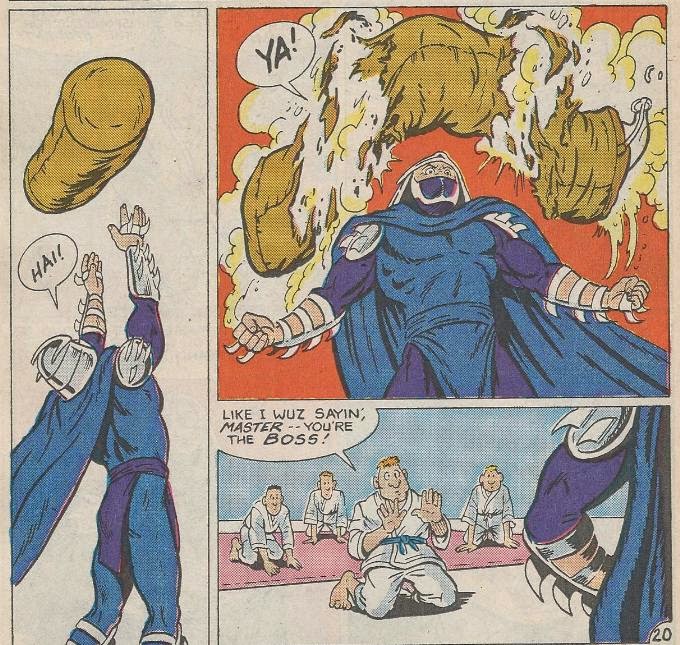 And the Shredder has returned! Landing in Central Park, Oroku Saki fights off a pair of luckless muggers before reporting back to Krang. Krang informs him that he won’t be sending Shredder any back-up of any kind and that he must defeat the Turtles on his own. Not to be denied, Shredder quickly locates the “Slash 4 Cash Dojo” and usurps leadership from Smash. With Smash and his unscrupulous cohorts under his command, Shredder initiates the creatively titled “Operation: Turtle Destruction”.

Back at the Channel 6 offices, Vernon is screamed out of the building by Burne, who is not pleased with his latest piece on wild poodles. Then, at the behest of his ditzy girlfriend, Burne orders April to leave and not come back until she has proof of the “turtle conspiracy”. 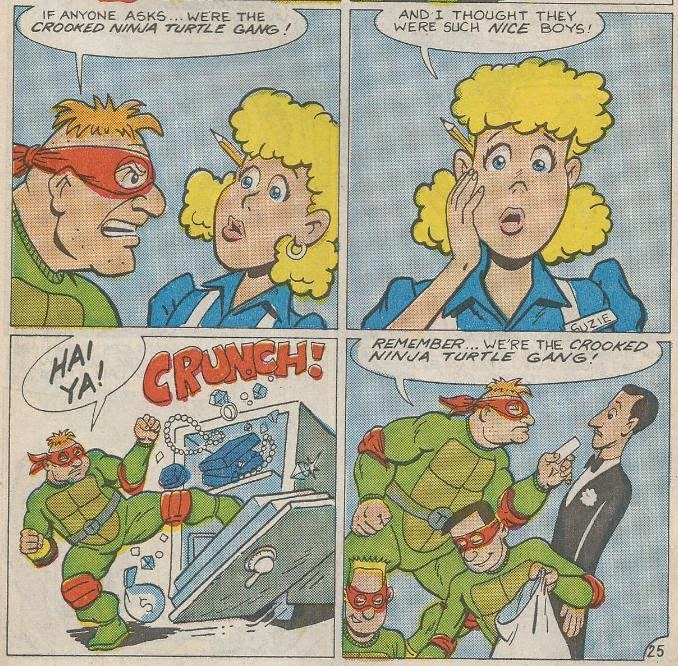 At the Slash 4 Cash Dojo, Shredder finally finishes teaching his students how to fight like a Foot Ninja. He then dresses them up in turtle costumes and orders them to ransack New York under the guise of the Crooked Ninja Turtle Gang. These imposters begin to give the TMNT a black eye in the media as Shredder revels in all the negative publicity he’s drumming up. He reports back to Krang, who is insists that his “bad public image” scheme will take far too long. Shredder then starts to concoct a means to reach quicker results…

*While Burne remains on model with his cartoon counterpart, Vernon sports brown hair and some more subdued features than his animated version. Meanwhile, Irma looks nothing like how she appears on TV in the least, sporting a bobbed black hairdo.

*This issue was reprinted in the UK by Fleetway as TMHT Adventures #4.

More episode adaptations. Boo. But at least we only have three more to suffer through after this one.

For the first issue in an ongoing series titled “Teenage Mutant Ninja Turtles”, this issue seems to hardly feature them at all. They practically vanish from the story after page 8, appearing in only two more pages between there and the end of the comic. I know that Dave Garcia was just following the script of the cartoon, but a first issue should feature more Ninja Turtles than this.

Speaking of Garcia, he moves on up from inker to writer and artist with this issue. His art is nicely cartoonish, though he takes the “Archie” label a little too seriously. All the humans look like they’ve stepped directly out of Riverdale. I’m not complaining; the style works just fine. It’s just a little too “Archie”. I’m not sure where he got his designs for Irma and Vernon, though. Maybe he was looking at early prototype model sheets or maybe he just made them up on the spot. I dunno. I actually kind of like this version of Irma, as I never really dug her super-80s design (which made her look like a human version of Jeanette from “Alvin and the Chipmunks”).

Anyhow, it seems to me that if they could have cut out anything for the sake of condensing the story, it should have been most of the stuff featuring the obnoxious Channel 6 staff. Unfortunately, their shenanigans absorb more page-space in this issue than the Turtles do.

Grade: D (as in “Do you think that ALL martial arts enthusiasts are thugs and larcenists just waiting to happen?”)