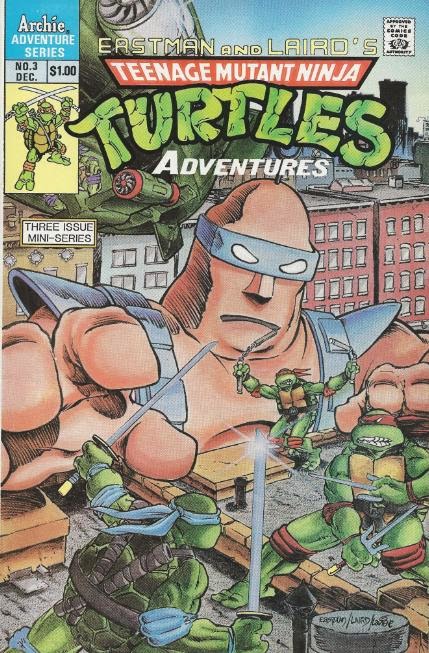 “Heroes in a Half-Shell! Part III”

As the Neutrinos escape to the surface, General Traag and his subordinate/doppelganger, Moog, are shocked to see their commander, Krang, in his bodiless state (Krang explains that he lost his body when he was banished to Earth). Shredder asks what the Neutrinos are and Krang reveals that they’re pacifist teenage beatniks who like to encourage people to have fun. Not a big fan of “fun”, Krang orders his Stone Warriors to stop them. 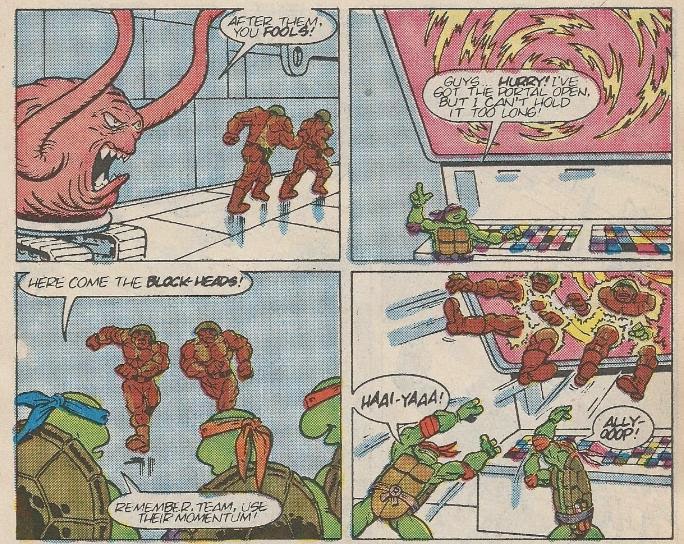 On the mean streets of New York, the TMNT encounter the Neutrinos. After a brief scuffle, the two parties exchange info and decide to drown their sorrows in pizza and video games at the Clowntime Food & Games restaurant. Their diversion is a short one, as the Stone Warriors attack. The Turtles, April and the Neutrinos escape to the sewer and Traag and Moog use a device to turn New York’s weather into total chaos. Learning about Krang from the Neutrinos, the group decide to invade the Technodrome yet again and send the squishy brain-thing back where he came from. After a skirmish, the Stone Warriors and the Neutrinos return to Dimension X, while the Turtles fly back to the surface in one of the Neutrino’s Starmobiles. Leo destroys the weather device, while back down below, Shredder finally concedes to building Krang’s body.

Back in the Turtles’ Lair, their regularly scheduled program is interrupted by Shredder who broadcasts them a bargain: they can have his retro-mutagen ray gun to return Splinter to normal, so long as they come and fight him for it. An obvious trap, Splinter warns them of the danger, as the ray could potentially return the TMNT back to their original state as normal pet turtles. 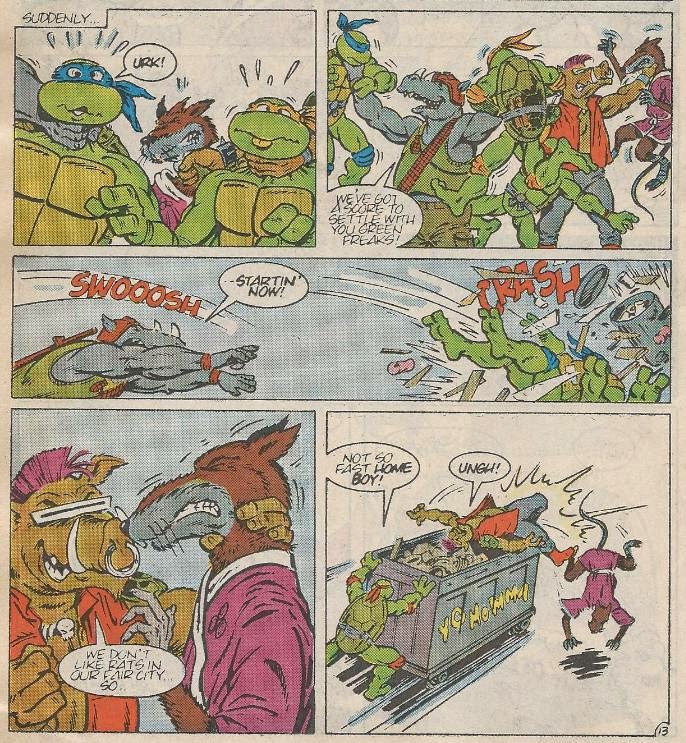 The Turtles and Splinter head to the streets in their new Starmobile, only to have it run out of fuel on them. Their troubles are compounded when Bebop and Rocksteady attack, guns blazing. The Turtles manage to encase the dimwitted duo in cement and escape. Don takes the Starmobile back to Baxter’s lab to modify it into something special, while the other Turtles and Splinter head to the Technodrome. 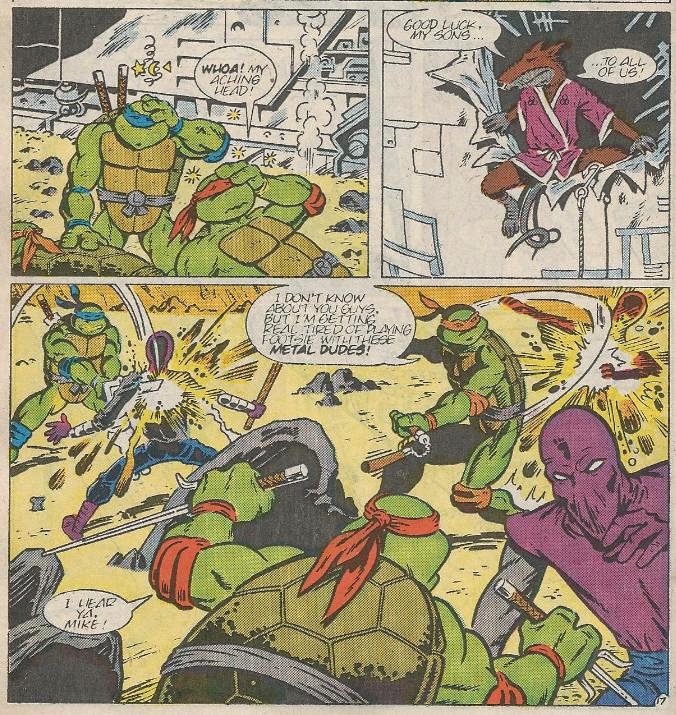 Back in the Technodrome, Shredder is finishing installing Krang in his new body when he’s interrupted by a Turtle alert. He deploys a unit of Foot Soldiers who succeed in separating the Turtles and Splinter. Krang awakens in his powerful (and ridiculous-looking) new body and faces off against the Turtles. Elsewhere, Splinter approaches the retro-mutagen ray gun, only to encounter Shredder and his holograms. Always the superior ninja, Splinter sees through his ruse and the two engage in their long-awaited showdown. Krang opens the portal and tells General Traag to standby for the impending invasion of Earth. He then proceeds to chase the TMNT to the surface, using his molecular enhancing abilities to grow to monstrous size. 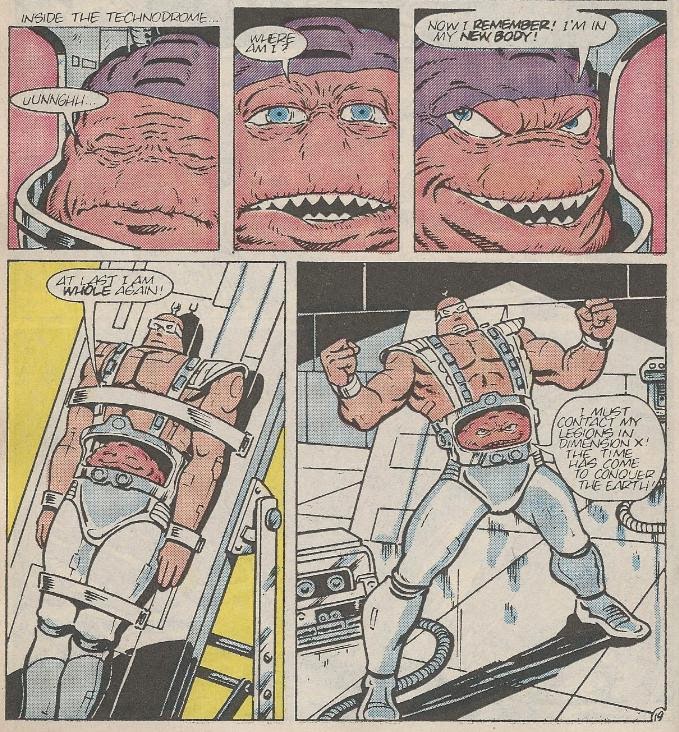 As Krang punches skyscrapers (because he’s a jerk like that), Don arrives in his newest invention: the Turtle Blimp (available from Playmates wherever toys are sold!). Don and Leo climb inside Krang’s robot body as April gets the whole thing on film. They locate the mechanism allowing him to increase in size and destroy it, then narrowly escape the shrinking Krang. Back in the Technodrome, Shredder is losing the fight. Being the badguy and all, Shredder blasts Splinter with a laser and heads to the surface. He threatens to turn the TMNT back into regular turtles with the retro-mutagen ray gun, only to have it destroyed by a vengeful Splinter, who’s not as unconscious as Shredder thought he was. 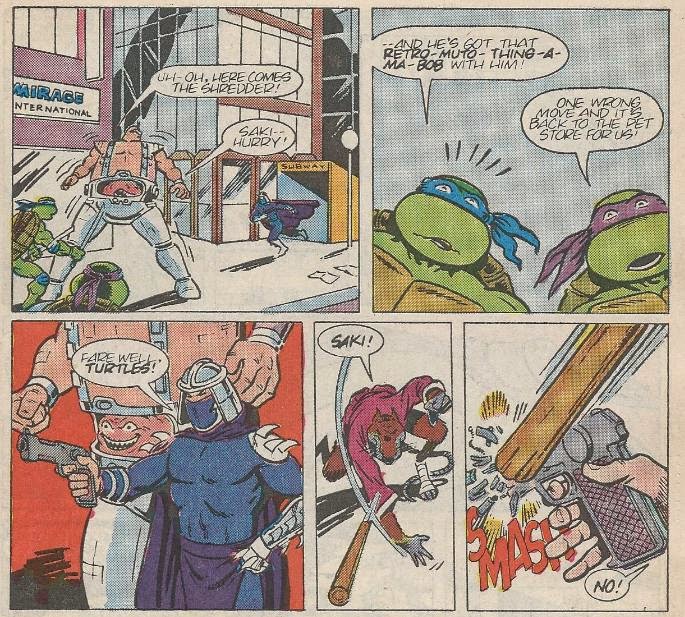 The Turtles follow Shredder and Krang back into the Tehcnodrome and Don rearranges some circuit boards. The Technodrome then transports itself back to Dimension X. Krang is overjoyed at the opportunity to conquer his home-dimension, though Shredder is less than pleased. Back at the Turtles’ Lair, they finish watching April’s news report on their recent adventures, only to have it followed by the late movie: “The Evil Brain from Dimension X”. The Turtles are not amused.

*Anti-mutagen will reappear in "The Fifth Turtle".

*Chapter Four of this story adapts the second half of the episode “Hot Rodding Teenagers from Dimension X” from the Fred Wolf TMNT cartoon.

*Chapter Five of this story adapts the episode “Shredder and Splintered” of the Fred Wolf TMNT cartoon.

*A “Gizmo” pinball machine can be seen at the Clowntime arcade. “Gizmo” was a comic published by Michael Dooney.

*In the cartoon, the Stone Warrior/Rock Soldier who accompanies General Traag from Dimension X is named Granitor (while not named in the cartoon, his name was revealed in the TMNT Arcade Game from Konami). However, in this comic adaptation, Traag's subordinate is drawn identical to Traag rather than as Granitor. Traag's subordinate is not named in the comic, but the Random House audiobook adaptation of this miniseries, "The Complete Adventure!", identified him in the dialogue as "Moog". Incidentally, the 1994 Kodansha/Comic Bom Bom publication, "Mutant Turtles Secret Encyclopedia", identified Granitor with the name "Moog".

*Though it was Mike who was shown to be infatuated with Kala in the cartoon, here Don steals both his lines and his concern for the Neutrino of the fairer sex.

*This issue was reprinted in the UK by Fleetway in TMHT Adventures #3.

The issue contains both my favorite and least favorite episodes of the first season of the cartoon. I never really liked “Hot Rodding Teenagers from Dimension X”, primarily because the Neutrinos annoyed the ever-living crap out of me. Thankfully, since you can’t hear them talk via the printed page, they were actually much easier to stomach in this medium. The adaptation of that episode seems to get cut short, though, so that the majority of the issue can adapt the best episode of the season, the incoherently titled “Shredder and Splintered”. But even though the majority of the issue is dedicated to that episode, they still seem to run out of space toward the end. It’s all wrapped up very abruptly, cutting out practically all of the final action. To give you an idea of this, after Splinter destroys the retro-mutagen ray gun, there are only two pages left in the issue.

Grade: C- (as in “C’mon, Dooney. You could’ve drawn Granitor in his actual character design. Or at the very least, Barry Grossman could have just colored him grey”.)