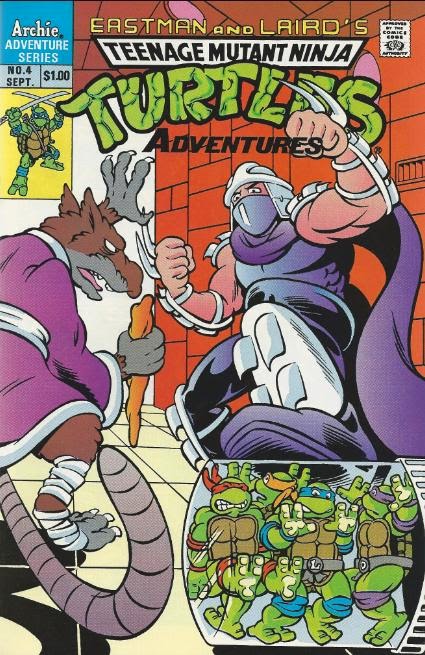 As Baxter and Shredder prepare to contact Krang with their proof of Shredder’s victory (numerous buildings shrunken by the fragment of the Eye of Sarnath), April and Splinter scour the city in search of their foe so they can retrieve the fragment and return the Turtles to their proper size.

Down in the sewer, all four Turtles are munching on a single (gigantic) slice of pizza when a flood of sewer water washes them away. Climbing on top of a bar of soap, they find themselves at the mercy of a hungry snake. They manage to escape the predator by feeding it some of the soap (it probably won’t curse anymore, either). 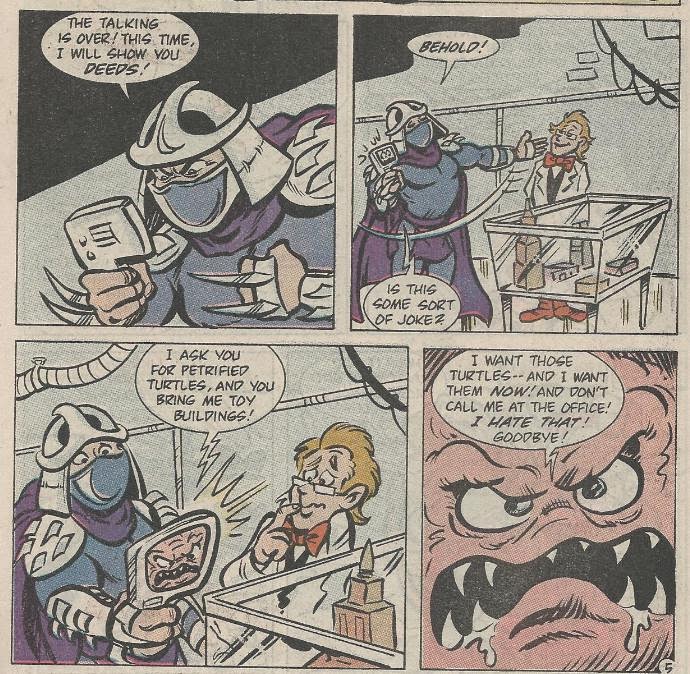 “Meanwhile, at an abandoned cheese packing plant on the wrong side of town” (actual quote from the comic, I kid you not), Shredder delivers his proof to Krang. Krang believes that they’re nothing but toy buildings and hangs up on Shredder. Stockman then reveals his latest invention, a heat-seeking turtle-scope which will help them track down the tiny turtles. Washing out to sea, the Turtles are about to be eaten by a fish when they’re “rescued” by Baxter Stockman’s net. 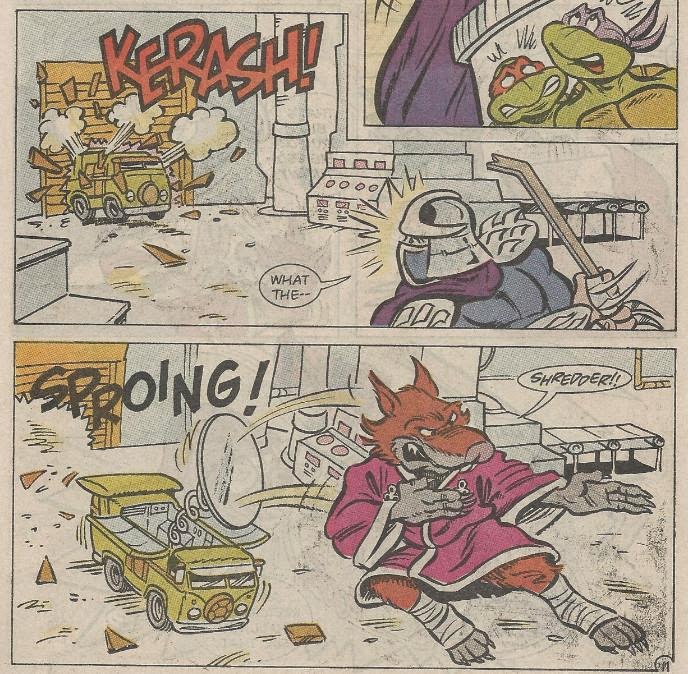 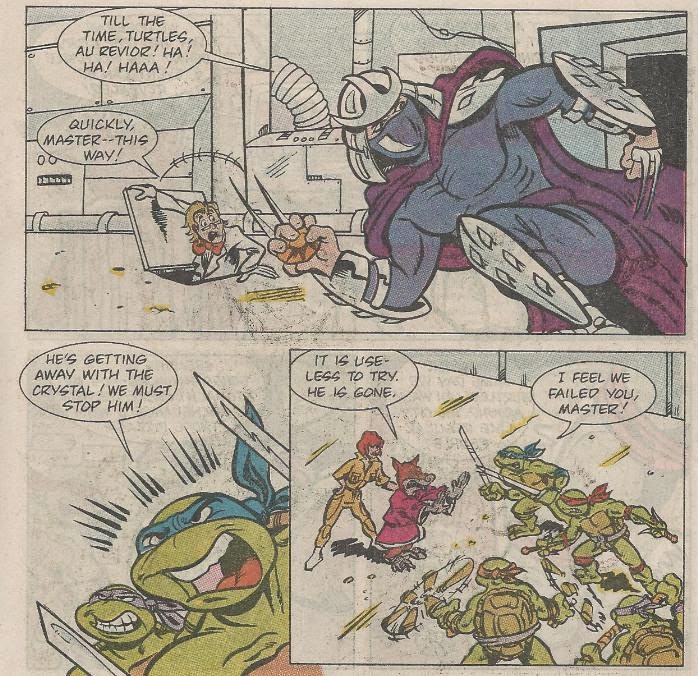 The heroes return home for some well-earned pizza, though they find that Splinter has ordered their dinner with a bit of a twist: they’re actually bite-sized pizza snacks!

*Some time between now and next issue, the events of "The Night of Monsterex" and "Origin of the Species" take place.

*The Eye of Sarnath story arc will be dropped after this issue. The fate of Baxter Stockman as well as the rest of the fragments of Sarnath won’t be revealed until TMNT Adventures #43. Does that suck, or what?

*This would be the last issue to adapt an episode of the Fred Wolf cartoon series. According to an October 1st, 2008 blog post by Ryan Brown over at "Cowabunga Cartoon Classics", the switch from episode adaptations to original content was made out of legal necessity, as Fred Wolf Films was accusing Archie Comics and Mirage Studios of breach of contract (Fred Wolf owned the rights to the episode scripts and apparently no one asked permission to use them for comics).

*This issue was reprinted in the UK by Fleetway as TMHT Adventures #7.

So it’s over. No more episode adaptations. Ever!

Ignoring the fact that they should have had original content to begin with, I can’t help but feel that they should have at least quit with the episode adaptations after “Return of Shredder”. “The Incredible Shrinking Turtles” began a story arc that lasted through almost the entirety of season 2 of the cartoon series. With the episode adaptations ending here, this entire plot is dropped like a sack of hammers, with it not being resolved or even so much as mentioned again for many dozens of issues. The transition from issue #4 to issue #5 can be pretty jarring if you’re reading everything back-to-back.

At any rate, “The Incredible Shrinking Turtles” kept from being a total waste thanks in large part to Ken Mitchroney’s wonderful art. He takes a retread that has no right to be even remotely entertaining and makes it at least enjoyable to stare at. Good show.

Grade: C (as in “Couldn’t Baxter have at least tried to keep April away from the fragment of Sarnath? Maybe just a little?”)