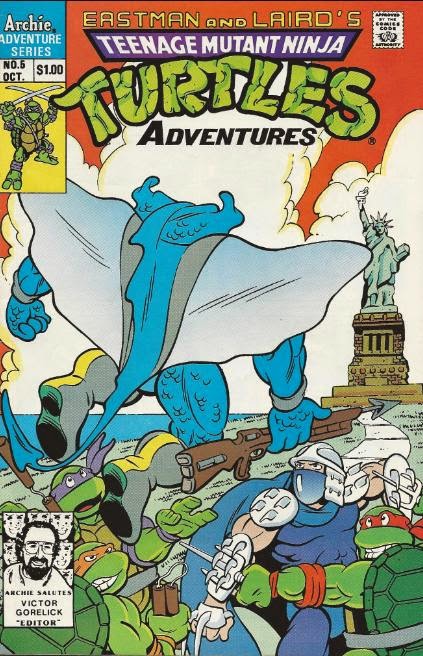 “Something Fishy Goes Down”

The Turtles are taking some time off at the Burroughs Aquarium outside Jersey City when they’re approached by an employee of the facility. After describing his admiration for devil rays to them in the creepiest manner possible, he politely asks them to leave before the aquarium closes. The Turtles decide to walk back to Manhattan along the beach. It’s a hell of a walk, but they’re ninjas, so they can handle it. 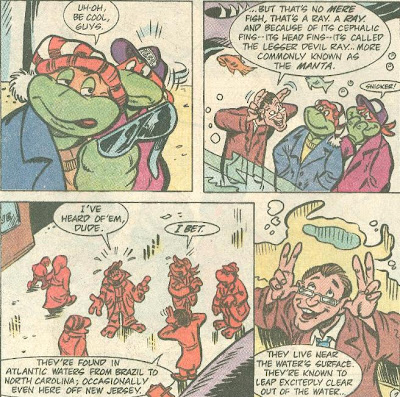 At the bottom of New York Harbor, Shredder is cruising around in his new submarine that he acquired somehow. Krang contacts Shredder over the communication machine, furious that Bebop and Rocksteady managed to lose a batch of his rare and costly mutagen into New York Harbor. Shredder casts Krang’s frustrations aside, instead choosing to detail his plans for the Fourth of July.

Back at the aquarium, the bespectacled employee gives his precious devil ray one last pet good night then proceeds to Bayview Beach for some undercover work. He locates a drainage pipe which he believes to be the source of much illegal corporate dumping. As with so many of these origin stories, timing is everything, and the devil ray-loving marine biologist is caught in a wave of Krang’s mutagen, pouring out of the pipe, and is quickly washed out to sea. 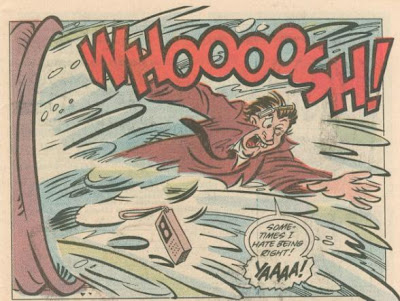 Not far away, the TMNT are frolicking on the beach when Bebop and Rocksteady spot them via periscope. Hoping to absolve their previous blunder, the duo report their findings to the Shredder who, fearing the Turtles would disrupt his plan to destroy the Statue of Liberty, launches a torpedo at his foes. The Turtles see the torpedo heading their way, only to find it dragged back down beneath the water by a mysterious figure. The creature hurls the torpedo back at Shredder’s sub, though it merely bounces off the hull (and doesn’t even explode, apparently…what was this torpedo filled with? Candy?).

As the Turtles wonder what could have saved them, Shredder docks his sub at his secret pier beneath the city and, along with Bebop and Rocksteady, begins loading the explosives onto the sub. Unbeknownst to any of them, the same mysterious creature slaps some plastic explosives onto the outside of the sub.

Down in the sewers, the Turtles are snooping around for answers when they happen upon Shredder’s hidden pier. They sneak inside the sub before it launches. Underwater, the mysterious creature prepares to detonate the explosives with a harpoon gun, only to stop once he spots Michaelangelo through a porthole. 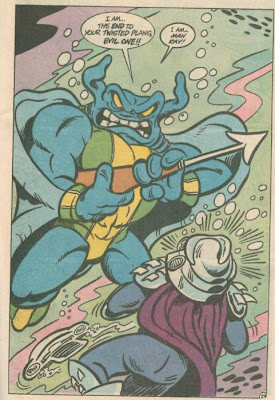 Shredder’s escape is interrupted, however, as he comes face to face with the mysterious creature: Man Ray! Man Ray defeats the Shredder in underwater combat, unplugging the hose to his air tank. However, once they both reach dry land, the tables turn and Shredder manages an escape after kicking sand in Man Ray’s eyes. The Turtles come to Man Ray’s aid, thanking him for his help. Man Ray can’t stay to chat, however, as he has a hard time speaking in his new body, much less staying on land for an extended period of time. As the Turtles watch Man Ray vanish into the water, they become distracted by the Fourth of July fireworks celebration happening over at Liberty Island. All are enamored by the beauty of the spectacle, save for Mike, who is going through violent pizza-withdrawals.

*Man Ray will return in "Yo-Ho-Ho! And a Bottle of Mutagen!".

*A deeper look into Man Ray's history can be seen in Mighty Mutanimals (ongoing) #3.

*An 8-page prologue to this issue was added for the TMNT Adventures Vol. 1 collection published by Tundra.

*It looks as if Krang has lightened his stance on not giving Shredder any help or henchmen, as stated in TMNT Adventures #1, seeing as how Shredder now has a slick new sub and Bebop and Rocksteady at his disposal.

*Man Ray actually debuted a few months before this issue was published in the TMNT Cereal comics from Ralston Purina.  In that early incarnation, he could fly like Superman (a power dropped by the time he appeared in TMNT Adventures).

*For the record, "Dean Clarrain" is just a pseudonym used by Mirage staffer Steve Murphy. For the sake of not confusing anyone, all my reviews will address him under his pseudonym.

*Don’t be confused: Though he’s called “Man Ray” in the Archie comic, he is the same character as “Ray Fillet” from the toyline.  He never properly appeared in the Fred Wolf TMNT cartoon.  He was set to appear in the season 4 episode "Rebel Without a Fin", but objections from Ryan Brown saw him replaced by a generic character named "Ray".

*This issue was reprinted in the UK by Fleetway in TMHT Adventures #8.

So here we have the first original story from TMNT Adventures. It’s a fairly cut-and-dry tale, with no discernible twists or turns and, if you don’t count the introduction of Man Ray, it’s a completely stand-alone story. Still, I will give it some credit: it’s basically the back of Man Ray’s (or Ray Fillet’s, rather) toy packaging adapted into a comic book. In case you’re wondering, the bio on the back of his card reads:

“You smell something fishy? That's because you just picked up Ray Fillet, the coolest sea creature to ever leap from the deep. Spawned from a marine biologist and a manta ray, Ray Fillet emerged from a toxic sewer pipe only to discover himself super-strong and super-slimy.”

The fact that they managed to take that and work a 28-page comic out of it is fairly impressive. The marine biologist who becomes Man Ray is never named in the issue, which is kind of annoying. His bio in the Mutant Universe Sourcebook #1 reveals his original identity as "Jack Finney". Personally, I always thought his real name was "Ray Fillet". Curses.

This issue also marks Dean Clarrain’s (Steve Murphy's) first turn at writing duties. As I said, this story isn’t especially impressive, but don’t look at it as some sort of microcosm of Clarrain’s writing skill by any means. An honest-to-gosh story arc begins with the next issue and he really hits the ground running. I just look at this as him getting his feet wet and figuring out the characters and their universe.

As always, Mitchroney’s art keeps things nice and fun, though there seemed to be a noticeable lack of explosions. A torpedo just bounces off the hull of the sub and sinks to the bottom of the harbor and Man Ray attaches some plastic explosives to a submarine full of bombs only to stop himself from pulling the trigger and simply letting the submersible sink to the seafloor.

Not enough “Kaboom!” for my taste.

Grade: C+ (as in “Clearly, this issue was not written by Michael Bay”.)