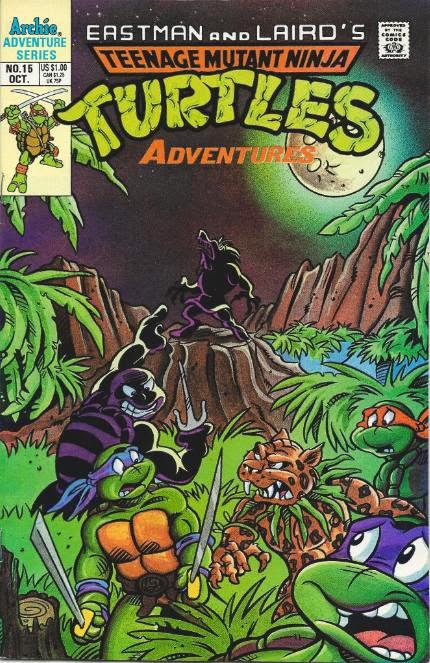 “The Howling of Distant Shadows”

With their new friend, Jagwar, as their guide, the TMNT and April raft down the Amazon in search of civilization. Spending several nights and days living off the land, they eventually come across a group of natives known as the Coipacu. With Jagwar acting as translator, he tells them that their elder, Paleocha, wishes them to be guests at a feast. 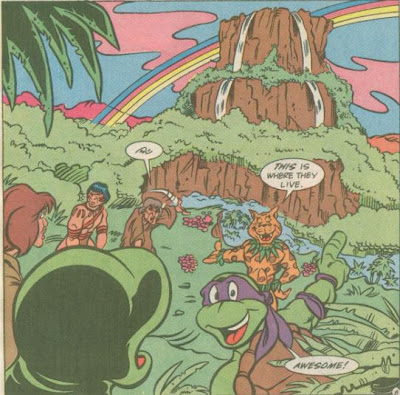 The Turtles and co. follow Paleocha into the heart of the rainforest, where lies a gorgeous plateau untouched by modern man. They enter a tepui at the base of the plateau and when they come out the other end, they find themselves in a land that time forgot: a “Lost World” populated by dinosaurs.

As the Turtles enjoy their dinner, Paleocha tells them of a strange creature that recently appeared. A jet-black wolf-man gifted with incredible speed; it seems to be mostly friendly, only stopping by to eat the food that they leave for it. As soon as they hear the story, the Turtles get a brief glimpse of the creature as it speeds in, grabs its meal and vanishes in a blur. 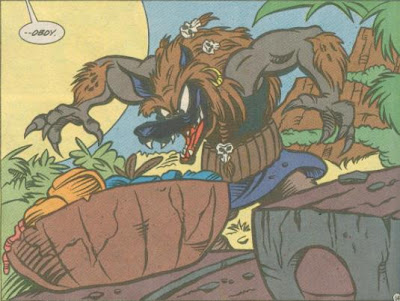 As the night wanes on, Paleocha finally reveals the true reason why she invited them to the feast. Apparently, a group of miners showed up at the outskirts of the rainforest, taking several of the villagers as slaves to labor in the mines. The Turtles agree to help Paleocha save her fellow villagers, though Raph is a little reluctant at first (what a dick).

The Turtles, April and Jagwar sneak into the mining grounds and take the guards by surprise. After a short brawl they appear to have everything sewn up…until a guard comes to and puts a gun to Jagwar’s head. Jagwar’s days look numbered, but then the strange wolf-thing they glimpsed earlier streaks by, taking out the guard and saving Jagwar’s life. As Jagwar thanks the wolf-man for the rescue, Don laments over his bo, which he accidentally broke while braining a guard. 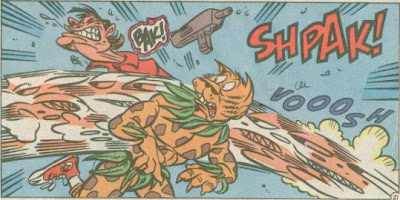 Elsewhere, a mysterious figured called “The Kid” watches the TMNT’s latest hijinks and reports back to his boss, Mr. Null. Null expresses his dissatisfaction with his mining operation being ruined and orders the Kid to keep constant tabs on the mutant animals.

Back at the Coipacu village, Paleocha offers a token of thanks to Don: a new staff which is supposedly as old as the tepui-itself. The Turtles question their new friend, the wolf-creature, who says his name is “Dreadmon” and that he has a hankering for some more of that monkey bladder pate that the villagers have been leaving him. As hungry as Dreadmon, Mike requests a portion of his own.

*Dreadmon's origin will be revealed in Mighty Mutanimals (miniseries) #2.

*Donatello will stumble upon another "lost world" populated by dinosaurs in Donatello and Leatherhead #2.

*Elements of this story were recycled for the comic in TMNT Magazine (Welsh) #6.

*This issue will be reprinted in the UK by Fleetway in TMHT Adventures #24.

The South American tour arc marches on, this time introducing us to another fan-favorite anthropomorphic animal: Dreadmon. Like Jagwar, Dreadmon never received a toy in the Playmates toyline, much to the fury of many a fan (my Mighty Mutanimals line-up remains incomplete to this very day). Also like Jagwar, Dreadmon appears out of the blue without any origin being offered for his existence. Outside of Jagwar and Dreadmon, pretty much all of the TMNT’s mutant buddies had their full origins revealed in their first appearances. It always seemed to me that these new characters had their depth fall victim as a casualty to the mandatory “public service announcement” nature of the story arc.

I suppose Clarrain (Murphy) couldn’t manage to fit in a new character, their origin and an in-your-face sermon about the evils of corporate gain into a single issue.

To go off on a rant, I always found TMNT Adventure’s crusade against corporations and pollution to be a wee bit hypocritical. The Turtles were a multinational success thanks in large part to corporations like Playmates and Fred Wolf. Their anti-corporate message wouldn’t have even reached the masses had corporate businesses not put the TMNT into the public eye. And in regards to pollution, you should have seen the amount of Turtles crap that was pumped out of Chinese sweatshops in the 80s and 90s. Oceans of plastic toys that’ll never biodegrade and are only destined to be thrown away by kids when they outgrow them are but the tip of the iceberg. And yeah, the kids working in those Chinese toy factories probably got paid 10 cents an hour at best, and that’s as good as slave labor.

Don’t get me wrong: littering and burning down forests is bad and I suppose it’s a good thing that TMNT Adventures went out of their way to get that message to kids. But I can’t be the only one to see the hypocrisy in it all, right?

Grade: D+ (as in “Don’t enslave people and force them to work for you…unless they’re manufacturing merchandise for your toyline. Then it’s totally cool”.)