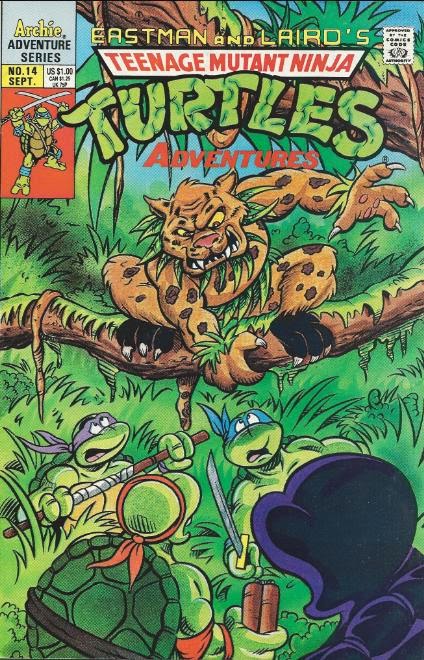 Returning to Earth, Cudley the Cowlick decides to spit the TMNT out in the Brazilian rain forest, as he thinks they can do some good there. The Turtles aren’t too pleased with their drop-off point, but haven’t a chance to argue, as Cudley quickly disappears back into space. They don’t have much time to mull over the situation, either, as they’re quickly encountered by the friendly anthropomorphic jaguar; Jagwar. Introductions are cut short, as a group of gun-toting mercenaries drive them into the heart of the forest. 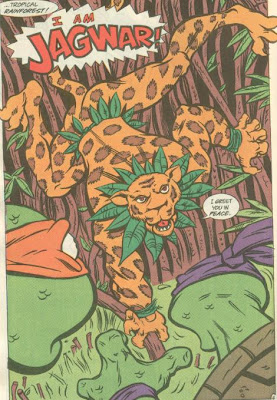 The TMNT and Jagwar trudge through the forest, eventually stumbling upon a temple. Jagwar explains that he was once worshipped there as a god, but now it is his only place of refuge from those who are destroying the rain forest. Jagwar tells the Turtles that the men who are destroying the forest nearby are also the ones who shot at them. Even worse, they’ve murdered Jagwar’s friend, Chico Mendes, and have kidnapped an American TV reporter! The Turtles agree to help Jagwar rescue the reporter and they wait for darkness to fall before they strike.

As they munch down fruit, Jagwar describes the circle of life to the Turtles: all that lives will die and all that dies will breed new life. When at last night falls, Jagwar tells them the time has come to save the reporter: April O’Neil! The TMNT are astonished that April is in trouble and the group moves out as fast as possible. 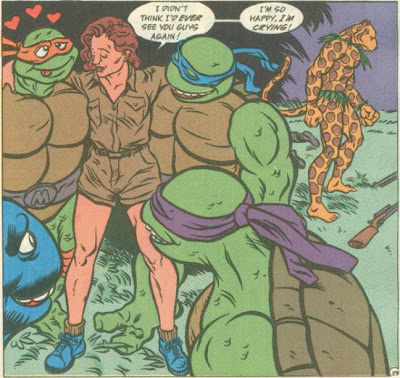 Making their way through the forest, the TMNT find April tied up at the mercenary camp. The Turtles and Jagwar take out the mercenaries with relative ease, reuniting with a very grateful April. They look over at Jagwar in celebration, only to find their friend crying. Jagwar says that he cries because he misses Chico but also because he knows that greedy lumber companies ravenously destroy the rainforest, averaging fifty acres every minute. 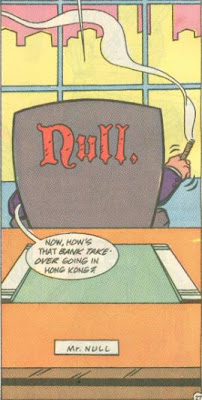 Back in New York, the mysterious business tycoon, Null, is informed that his mercenaries in Brazil failed at their assignment to kidnap April O’Neil. His secretary tells him that O’Neil was rescued by several humanoid animals. Null takes an interest in the situation and asks to be kept updated.

*Jagwar’s origin will be revealed in Mighty Mutanimals (miniseries) #2.

*Though April has been seen quite frequently on television in the past few issues, the last time she actually interacted with the Turtles was in TMNT Adventures #4.

*Null’s true identity and purpose will be revealed in TMNT Adventures #19.

*This issue was reprinted in the UK by Fleetway in TMHT Adventures #23.

And so begins the South American tour arc of the series. A lot of fans tend to revile this arc, as it is fairly heavy-handed with its environmentalist messages. Expect every issue to tackle some sort of issue regarding pollution, deforestation, poaching or whatever. While the message delivered here isn’t even remotely as preachy as, say, Captain Planet, it can get a little tiresome after a while.

The South American tour arc serves to introduce us to some more characters, though it doesn’t feel so much like a “toy commercial” as you’d think. The characters introduced during these issues will serve a much greater purpose towards the end of the next arc, eventually culminating in the creation of the Mighty Mutanimals. Also, the characters introduced in this arc never got toys! Well, Jagwar almost got one in 2007, but that was a bust.

As far as introductions go, I’m afraid that Jagwar’s falls fairly flat. Outside of some vague mumblings about his once being worshipped as a god, we get no background info on the guy. He just shows up, makes friends with the TMNT in the span of a page and that’s that. Up to now, the book was pretty good about telling us where all these weirdos came from.

This issue features fill-in artist Don Simpson’s first and only turn at the book, and let’s just be grateful for that last part. Simpson’s art lacks the more whimsical qualities of Mitchroney or even Lawson’s efforts, being fairly clunky and awkward. His interpretation of the Turtles doesn’t sit too well with me, either, as they’re all very wrinkly, scaly and needlessly deformed-looking. Despite their rather fugly appearances, the Turtles remain fairly expressive, though. Jagwar, on the other hand, has some serious emoting issues and just comes across as looking pretty boring throughout the issue.

Overall, this wasn’t the best of issues. Some bad art, a weak introduction of a new character and a pretty unremarkable conflict with a preachy agenda.

Grade: D+ (as in “Don’t you think it’s a little odd that the TMNT are always drawn to other anthropomorphic critters?”)