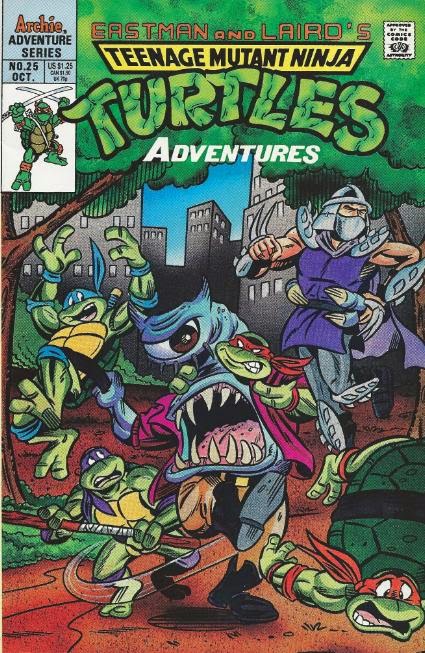 At a shopping center, Bebop and Rocksteady are finishing up their errands: punk outfits and heavy artillery. With their looted goods in hand, the pair of mutants head over to the Central Park Zoo for their next job. 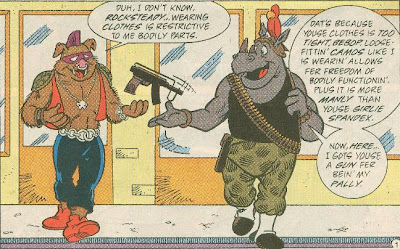 Back at the rubble that was Shredder’s hideout, the Turtles are up against Krang (now in control of Shredder’s body) and Bellybomb. Leo takes on Krang while Mike and Don deal with Bellybomb. Raph has his hands full, too, as Slash erupts from the debris and heads his way. Slash gains the upper hand against Raph after a short clash, but then runs off when he realizes he still needs to find his palm tree. Meanwhile, Mike and Don are spinning their weapons furiously in the hopes of diverting Bellybomb’s mega halitosis breath. Leo, on the other hand, is being much less strategic and slashes Krang along the Shredder’s chest. Krang, despite being in control of Shredder’s body, fells no pain and continues to fight. 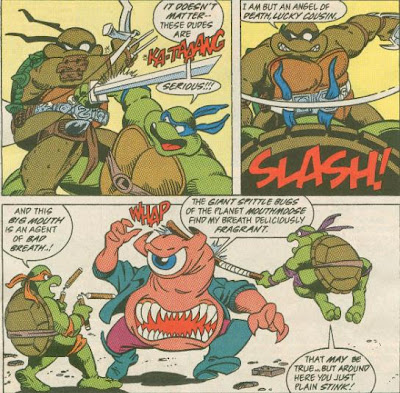 Back at the Zoo, Bebop and Rocksteady are waxing nostalgic about the days when they used to be normal animals, caged at that very same zoo. With those memories in mind, they walk over to a tiger cage and open fire.

Elsewhere, at a Pets ‘R’ Us shop, Slash gazes longingly at a small plastic palm tree. Smashing the window open, Slash snatches up the palm tree and at last knows sweet, sweet contentment. 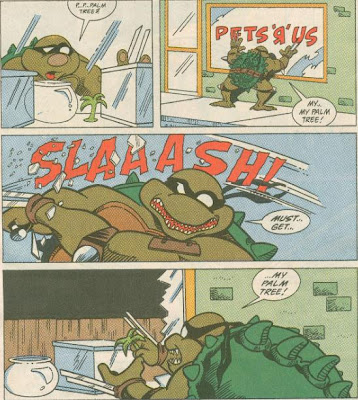 And back at the fight, Raph comes to and rushes to help Leo. Leaping onto Shredder’s back, Raph points his sais into Krang and threatens to give him a lobotomy. Krang concedes and allows Raph to remove him from Shredder’s body. Meanwhile, Don and Mike succeed in fanning Bellybomb’s halitosis back at him, knocking the villain out cold.

Everything seems fine and dandy until Bebop and Rocksteady arrive with their menagerie of liberated zoo animals. With guns firmly in hand, they politely force the Turtles to disarm themselves. A soggy Shredder then hobbles to his feet, realizing that he owes his freedom to his arch foes. As he stumbles away, Leo reminds him that he’s in their debt. Quietly, Shredder acknowledges this fact. 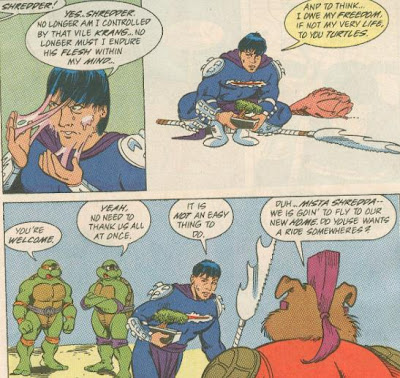 Happy with their “victory”, Bebop and Rocksteady load all the animals onto the spaceship they came in on and prepare to return to their Eden-World. Before they go, Leo asks them to take the unconscious Krang and Bellybomb with them. Bebop and Rocksteady happily comply and fly off. With the day saved, the Turtles leave to go get some pizza, not exactly sure that they really won the fight.

Out in space, the two mutants drop Krang and Bellybomb off on Morbus and return to their Eden-World. After exiting the ship, they immediately disrobe and resume their retirement.

Now fully transformed, Warrior Dragon spots the getaway car containing Fu Sheng and attempts to nab it. Instead, he accidentally plucks up a civilian vehicle. Acknowledging his mistake, he heads after the real culprits only to be attacked by more ninja. 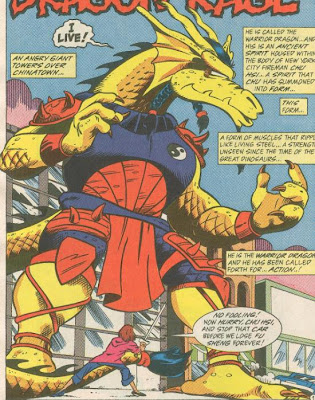 As Warrior Dragon swats them away, April is besieged by more from the shadows. As she fights them off, she notices they have unusual abilities, such as being able to fall ten stories and not die.

Warrior Dragon’s fight with the ninja “fleas” is going well until one hurls a handful of powder into his face. Warrior Dragon then collapses and reverts back to Chu Hsi. As April runs to his rescue, the ninja distract her with a flurry of shuriken. When she looks back, both Chu Hsi and the mysterious ninja are gone.

*Bebop and Rocksteady will return in the TMNT 30th Anniversary Special story, "Paper or Plastic?"

*The Shredder will return in TMNT Adventures #35.

*Slash will return in Mighty Mutanimals #9.

*In the letter’s page of TMNT Adventures #29, Clarrain explains that Rocksteady’s red pet parrot, a crimson rosella, was once a Turnstone locating device that was turned into a bird by Cherubae. He assures us that we’ll learn more about the bird in future stories.  That never happened, unfortunately.

*This issue was published in the UK by Fleetway as TMHT Adventures #45.

Say good bye to Bebop, Rocksteady and Krang, because you won’t be seeing them again. The Slash Trilogy acted as something of a last hoorah for the villains who were featured so prominently in the Fred Wolf cartoon, as Clarrain (Murphy) makes an even more distinct effort from this point on to distinguish the Archie comic from the show. Even Shredder’s participation in the book will be heavily diminished for quite a while (you won’t see him again for ten issues!).

I understand why Clarrain did this, since TMNT Adventures was becoming its own unique entity with increasingly more challenging and mature stories there came a need to distance it from the goofier TV series. Shredder, Krang, Bebop and Rocksteady appeared in nearly every episode of that show and, as much as I loved those guys, I did get pretty sick of them. Making Shredder take a break was a very good idea, but I wish Krang, Bebop and Rocksteady hadn’t been retired completely. Still, they got appropriate send-offs, so I can’t really complain.

While last issue featured some very uneven artwork, Chris Allan takes up full pencil duties for this story and the Slash Trilogy ends on a definite high note. While I would have liked the rumble between Raph and Slash to have lasted longer, it was still satisfying. And hey, Leo draws blood! Yikes.

The Shredder coming to the uneasy realization that he owes his freedom and perhaps his life to the Turtles makes for an interesting conclusion and provides a smidgen of depth to the villain, as despite his evil ways, he still understands the value of honor. He was taught the ways of the Foot the same as Splinter, after all, and the Foot didn’t turn to crime until after Shredder seized command.

And as for the back-up story…

We get some nice action sequences, but that’s mostly it. The problem with back-up stories as a concept is that limited page space makes for limited story progression. When read as a whole, they make a fine adventure. When read 8 pages at a time, you’re left with an empty feeling.

Still, the story progresses, we get some nice art and some good fight scenes, so really, what’s there to complain about?

Grade (main story): A (as in “And despite their blood-thirsty ‘cousin’ still on the loose in Manhattan, the Turtles decide to focus their energy on pizza”.)