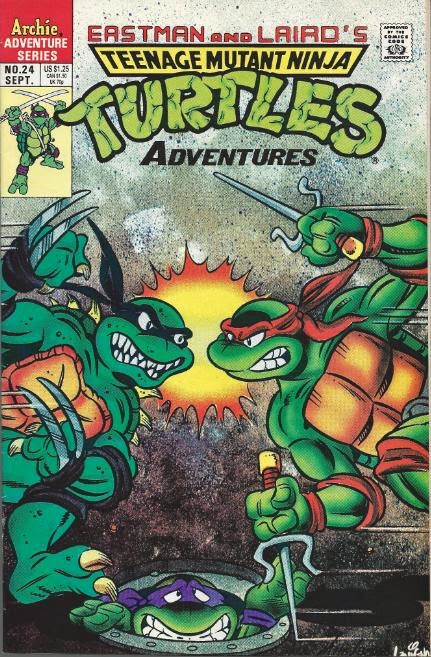 Out in space, Krang, Slash and Bellybomb are at the mercy of their purloined ship’s autopilot, which prevents them from altering their course until it makes its delivery. The ship takes them to an Eden-World, a utopian all-natural planet (one big African Savannah) where advanced lifeforms are forbidden. After dropping off several dozen antelope, the aliens go exploring and stumble across two very unexpected allies: Bebop and Rocksteady. Bebop and Rocksteady ask if they can hitch a ride back to Earth since the Eden-World’s lack of crime has become boring. Krang lets them tag along and the baddies get back onboard their ship. 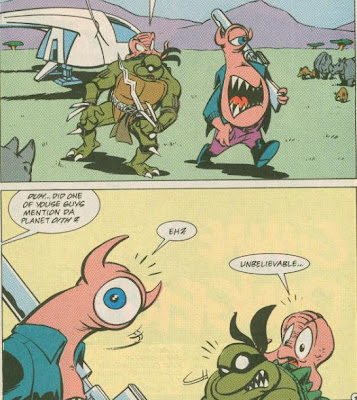 On Earth, the Shredder is pruning a bonsai tree in one of his secret lairs, reminiscing over his most recent defeat at the hands of the Turtles. Down in the sewers, the Turtles are still proactively searching for the Shredder. They find a trail of discarded mutagen drums and follow it to Shredder’s hide-out.

Back in space, Krang and friends enter the Milky Way Galaxy. Bellybomb asks if they can stop off for a bite to eat before reaching Earth, but Krang informs him that Earth is the only inhabited planet in the galaxy. He then back tracks and admits that there might possibly be life on Mars, though. Overhearing the conversation, Bebop and Rocksteady are astounded at the thought that aliens really exist. Krang, Bellybomb and Slash knit their brows in frustration.

Back in Shredder’s hideout, the artwork suddenly gets really, really bad! Oh, and the Turtles burst through the door and attack. As Shredder takes on the Turtles, Krang enters Earth’s atmosphere and looms closer to the hideout. As Shredder gains the upper hand in battle, Krang crashes the ship through the wall and interrupts the fight. 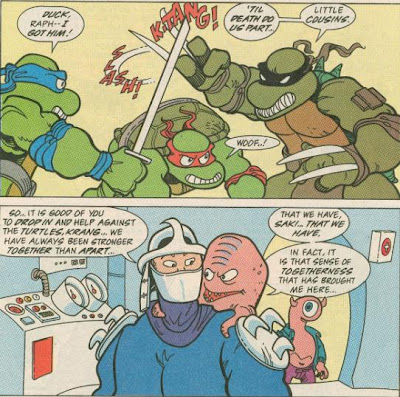 Bebop, Rocksteady and Slash immediately enter the fray. Leo, Don and Mike take on Bebop and Rocksteady, who are more concerned with finding a fresh set of clothes than fighting. Raph, then, is left to tackle Slash, who considers the Turtles to be his "cousins" but is willing to kill them anyway (swell guy). With Bebop and Rocksteady knocked out, the other Turtles come to give Raph a hand against his berserker opponent. 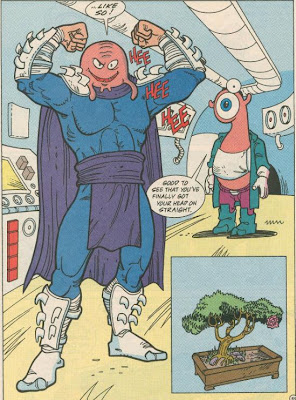 Meanwhile, Shredder sneaks onto Krang’s ship, hoping to find some high-tech alien weaponry. Instead, he finds Krang and Bellybomb. As Krang distracts his former partner, Bellybomb uses his bad breath to knock Shredder out cold. They then set Shredder down on a surgical table where Krang begins “adjusting” himself over Shredder’s noggin. Eventually, he seizes full control over Shredder’s motor functions, turning him into his new body.

On the streets of Chinatown, April bumps into Chu Hsi and Fu Sheng. They shoot the breeze for a while, with April eventually asking Chu if he’d like to get some lunch. Fu takes that as his cue to exit and leaves to go meet with his fire insurance agent (his curio shop having recently burned to the ground). 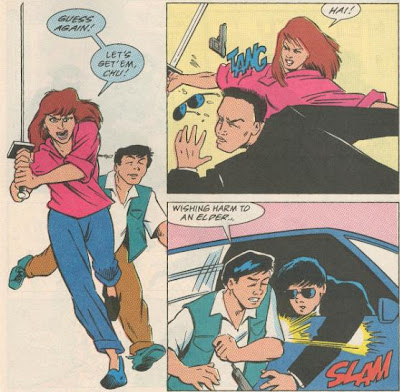 As Fu walks away, a pair of spooks dressed in black suits leap out of a car and try to abduct him. Fu attempts to fend them off but gets pistol-whipped from behind. Unsheathing her katana, April leaps into action with Chu not far behind. They rescue Fu, only to be overwhelmed by a horde of ninja.

April tells Chu there’s no other choice: he must transform into the Warrior Dragon. Chu acknowledges her and morphs into the towering yellow behemoth…

*Bebop and Rocksteady were last seen in TMNT Adventures #13.

*This issue was published in the UK by Fleetway in TMHT Adventures #43.

The Slash Trilogy is one of my favorite TMNT Adventures arcs from a story-telling stand-point, but unfortunately, not from an artistic one. The violent shift in art quality between (and within!) issues is very annoying, with this issue being the weakest link.

The first ten pages are done by Garret Ho, an artist with a whimsical style similar to Ken Mitchroney’s. He took some getting used to, but I’ve come to like his work. It’s very expressive and fun, particularly in regards to the more dimwitted characters like Bebop and Rocksteady. That last panel on page 10, featuring Krang’s, Slash’s and Bellybomb’s reactions to Bebop and Rocksteady’s idiocy: absolutely priceless. And even Slash, a single-minded palm tree enthusiast, looks like he’s thinking “How stupid ARE these guys?” Some fine work on Ho’s part.

Unfortunately, the visuals completely self-destruct by page 11, when Jim Lawson takes the wheel. His ten pages in this issue are, without any doubt in my mind, the worst artistic output of his entire career. I have a love-hate relationship with the man’s style, to be sure, but it honestly looks like he drew these pages on his lunch break. While his skill at posture and motion remain intact (these are his strongest points, in my opinion), the character designs are less detailed than ever, with the Turtles’ eyes and mouths looking especially awful. And his Krang…good Lord. It’s the most pathetic sight I’ve ever seen.

I could go into further detail why his art in this issue is so terrible, but I think I’ll just show you instead: 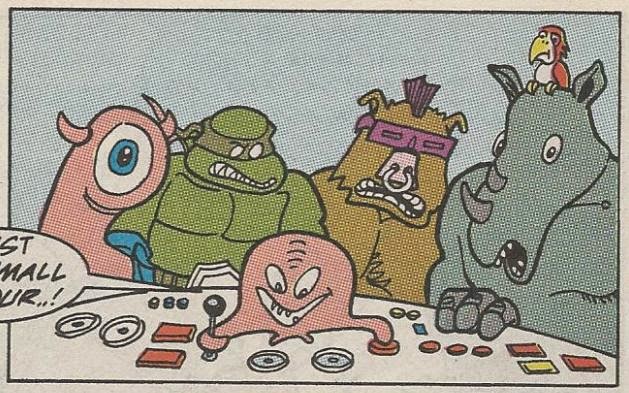 THAT speaks for itself.

Now, so far as the story is concerned, Dean Clarrain is in peak form. Or should I say Steve Murphy is? In case you’ve been out of the loop, Steve Murphy recently revealed that “Dean Clarrain” was actually a pseudonym of his, meaning he’s the man who wrote all these stories. Despite that, I’m still going to refer to him as “Clarrain” in my reviews to prevent confusion.

Anyhow, where were we? Oh yeah, the story.

Clarrain is in top form, with a witty script that features lots of punchy dialogue and gags. He seems to have gotten most of his eco-preaching out of his system, too. Despite the presence of a utopian Eden-World, Clarrain forgoes any terribly blunt dialogue about the environment. Good show! The script is very tight and offers some great moments, it’s just a shame Lawson dropped the ball with the art. Then shot it. Then set it on fire. Then stomped on its ashes.

Now for the back-up story!

Chris Allan takes a break from the main story to do an April O’Neil adventure. He draws great-looking people as well as mutants, which is one of the things that made him such a welcomed sight on this book, as many artists were only capable of drawing one or the other.

Chu Hsi/Warrior Dragon has a lot of story potential and it’s great to see Clarrain taking advantage of it. April’s back-up stories for the next few issues will eventually lead into her own self-titled miniseries.

At only six pages there isn’t a whole lot to say about this back-up, just that it’s some nicely drawn and nicely written set-up.

Grade (main story): C+ (as in “Cripes, I thought that halfway through reading the book one of my eyeballs fell out. Jeez…”)

Grade (back-up story): B+ (as in “By the way, ‘Curio Shop Owner’ is finally gifted with a real name in this issue”.)