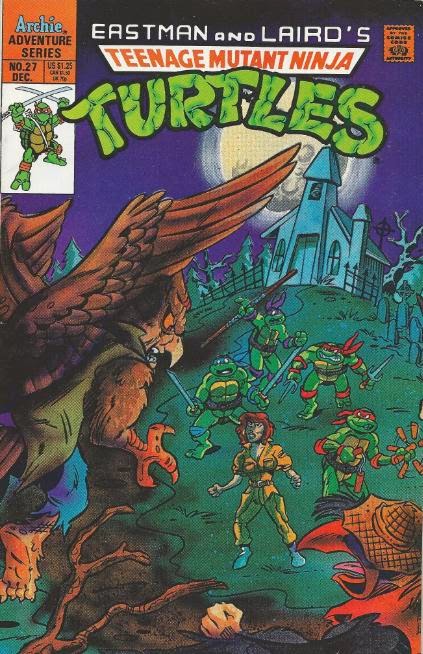 Late one night, on a lonely Massachusetts road, a pair of truck drivers (Benny and George) and their pet cat (“Pookey”) enter an incinerator plant. There, they are greeted by their boss, Mr. Rutt, who tells them to haul as much toxic waste as they can over to Hampshire County and dump it on the back roads before dawn. As he explains this, a crow and an owl are knocked out by the fumes of the plant and plummet into the smokestacks where they land in the vats of waste. Back inside, Mr. Rutt accidentally trips over Pookey and, in a fit of rage, kicks the cat into a vat of toxic waste. Benny laments the loss of his pet, though George reminds him that the cat was always mean to him and everybody else. 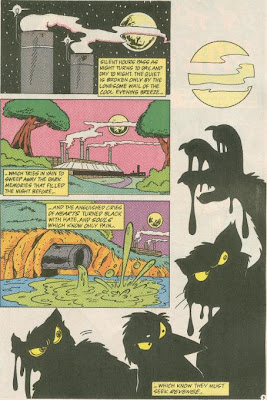 Near a drain outside the plant, the three animals wash ashore, now horribly mutated.

The following Spring, April is driving through New England, on her way to Boston to research a story on toxic waste dumping, when her rental car gets a flat. With no spare, April has no choice but to walk to the nearest town, a small place called Innsmouth. Getting lost on the country roads, April is eventually met by an unpleasant cop, Officer Barney, who hauls her back to town.

At the Sheriff’s office, April tells her story to Sheriff Taylor, who is suspicious of any visitors coming to Innsmouth. He tells her to go to the diner across the street while they fix her car. Officer Barney insists they keep April from telling the outside world about Innsmouth, so Sheriff Taylor makes a phone call to the diner. After eating her meal, April becomes very ill and nearly collapses on the street. A young girl named Beth Ann tries to help her get to some place safe before the sun sets and “the Boogeyman” come out. April, fed up with all this small town nonsense, ditches Beth Ann and hobbles away. 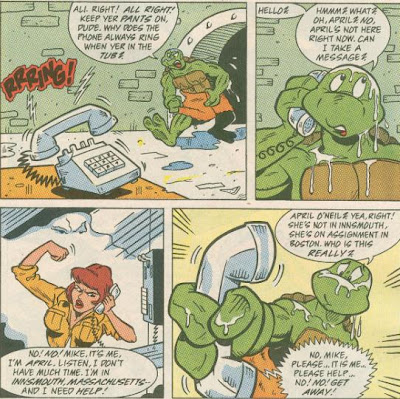 April is suddenly besieged by the people of Innsmouth, who don’t want to hurt her, but make her stay with them forever. Still sick, April makes a run for it, only to find all the people of Innsmouth following her like zombies. She ducks into an alley and loses them, then makes her way over to a phone booth. She calls the Turtles, but unfortunately, Michaelangelo answers. April tries to explain what’s going on, but Mike isn’t sharp enough to follow. April’s phone call is suddenly interrupted as she is dragged away.

Mike, believing it to have been a prank call, resumes his sparring session with Splinter and the other Turtles. They ask him about the call, but Mike tells them it was just some jerk pretending to be April. They remind Mike that nobody knows they’re friends with April and nobody else knows their home number. Realizing it really WAS April, the Turtles load up into the Turtle Van and head to Innsmouth.

Arriving in Innsmouth, the Turtles sneak onto the streets, only to find themselves standing amidst a crowd of people. Curiously, the people don’t even appear to notice them. Beth Ann then introduces herself to the Turtles and explains that about a year ago, “the Boogeymen” came to Innsmouth and put stuff in the food, turning everybody into zombies. Beth hasn’t eaten much and so far has not been turned. She shows the TMNT over to a boarded up church where she claims the Boogeymen have taken April. 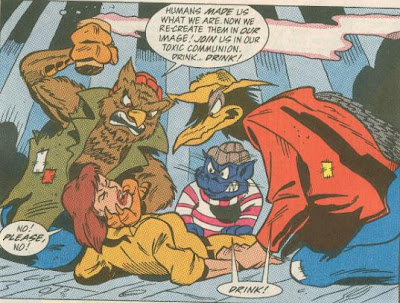 Inside the church’s steeple, a mutant owl, crow and cat are trying to force April to partake in their “toxic communion”. They blame humanity for turning them into monsters and now take their revenge by poisoning them. Raph kicks the can of toxic waste from their hands and the Turtles attack. They beat up the Boogeymen and send them hurtling out of the steeple and onto the hard, unforgiving ground. However, when they go to the window to check, the Boogeymen are nowhere to be found.

A week later, the people of Innsmouth have returned to normal. Thanks to April’s investigations, the plant which created the toxic waste has been closed down for good. Beth thanks April and breathes a sigh of relief that everything is finally over. However, as April and the Turtles drive away, the Boogeyman watch them from the shadows.

As April and Splinter interrogate the spook, a White Ninja drops down from the ceiling and attacks. Splinter recognizes his garb as a sign of Death and the White Ninja effortlessly bests him in combat. As he prepares to deliver the killing blow, April swings her katana into the ninja’s face. Instead of chopping his head in two, the ninja simply evaporates, leaving only his white outfit. 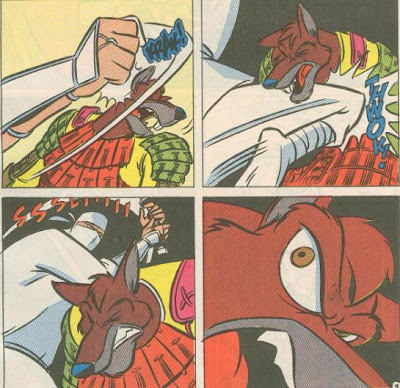 April and Splinter return their attentions to the spook, who finally reveals that Fu Sheng and Chu Hsi have been taken to Hiroshima, Japan.

*The fictional town of Innsmouth was a popular town within the mythos of horror writer H.P. Lovecraft, most notably in his story “The Shadow Over Innsmouth”.

*The Turtle Van was last seen in TMNT Adventures #4.

*Some time between now and next issue, the events of TMNT Meet the Conservation Corps #1 and "Coney Island Days" occur.

*Though they’re referred to as “The Boogeymen” in this issue, TMNT Mutant Universe Sourcebook #2 identifies their group name as “The Uncanny Trio”.

*Some fans believe that the cat member of the Uncanny Trio is supposed to represent the character of Scratch, a mutant cat in a pinstripe getup who was released in the 1993 wave of the Playmates toyline. Aside from both being mutant cats in striped shirts, there wouldn’t appear to be any further connection between the two.

*According to the indicia, the Uncanny Trio's names are Nevermore the Scarecrow, Nocturno and Hallocat. These names never appear in the issue-itself or in the Mutant Universe Sourcebook. This is the only place they've ever appeared in TMNT Adventures.

*The Uncanny Trio will return in "Coney Island Days".

*Nocturno actually made his first appearance a few months before this issue, in TMNT Magazine (Welsh) #3 (which is a separate continuity).

*The ending of the main story is a parody of the ending of John Carpenter’s “Halloween”, right down to some cribbed dialogue.

*This issue was published in the UK by Fleetway in TMHT Adventures #49.

Another filler story about environmental awareness, but at least this one was made a bit more palatable thanks to some horror movie trappings. The Boogeymen or the Uncanny Trio, or whatever the Hell you want to call them, aren’t particularly enthralling villains. I mean, they don’t even have individual names in the text (unless you count “Pookey”). They’re defeated with ease, something which Leo points out in amusement, and then proceed never to appear in the book again. I can’t claim they’re as tremendously lame as, say, Vid Vicious, but they still suck pretty hard.

We’re treated to more in your face environmental issues ripped straight from Captain Planet. Mr. Rutt spending the first few pages of the issue detailing how evil he and his corporation are through brick wall exposition is pretty rough to read through and a worse slap in the face than usual. At this point, you can tell that the creative team behind this issue were more interested in standing on top of their soapboxes than telling an entertaining story.

As for the art, well, say goodbye to Ken Mitchroney, as you won’t see him again until TMNT Adventures #41. Not a very high note for the guy and his art seems a bit more phoned in than usual. I get the feeling he didn’t know if Beth Ann was supposed to be a girl or not, either.

The back-up story is going somewhere, but still suffers from the same problems I detailed in my review for last issue (boring, solid color backgrounds, achingly slow pace, etc.). At least this one had some more action to sink your teeth into.

Overall, this and the previous issue represent the worst kind of filler and a true creative low point in what has been a pretty good book. I’ve found the five-page back-up stories to be more engaging than the main stories, which is a shame, as they’ve been pretty dull, too.