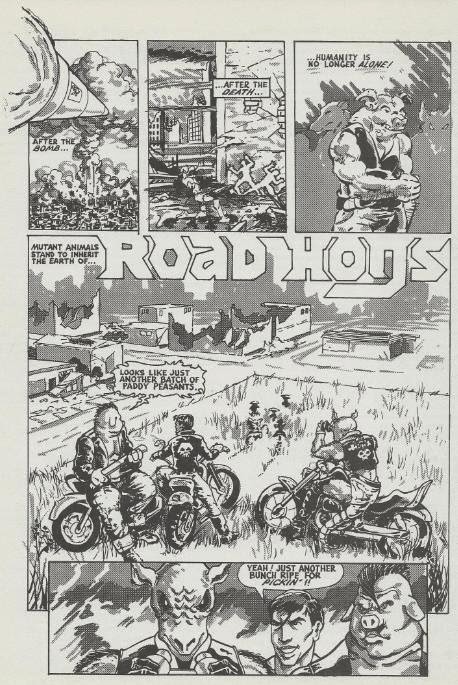 In the distant future, the Earth has been ravaged by nuclear wars. The radiation has mutated once normal animals into humanoid creatures who have since become the planet’s dominant species.

In the ruins of a city, a ruthless biker gang called the Road Hogs come across three turtle farmers working in a rice paddy. They send two of their men (an elephant and a rat) to gather info from the farmers regarding their defenses. The three turtles (a guy, a scar-faced guy and a girl) are happy to talk to the passers-by and tell them that all the guns are safely locked away in the temple so they can’t harm anyone. Overjoyed, the pair of Road Hogs return to their cronies with this info in hand. 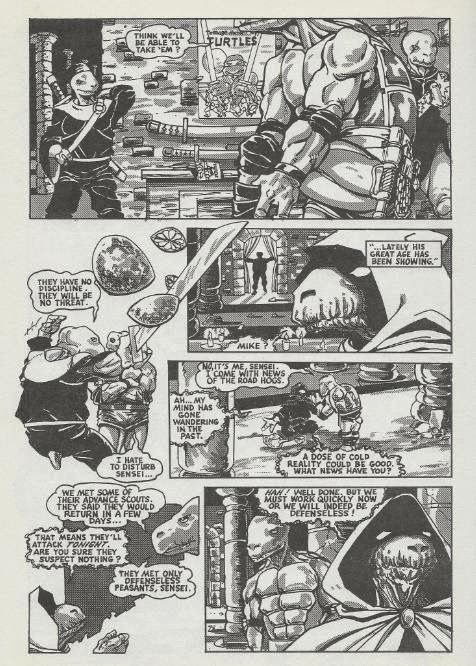 Meanwhile, the three turtles throw off their farmer garb and race back to the temple, their plan now set in motion. They change into their ninja outfits and take their weapons off the rack (decorated with a poster of the legendary Teenage Mutant Ninja Turtles). The non-scarred guy goes to alert their mysterious, hooded turtle Sensei, who in his “advanced age”, initially mistakes his student for “Mike”. The Sensei snaps out of it and tells his students to work quickly and prepare for battle. Along with the local farmers, the turtle ninja begin preparing traps for the return of the Road Hogs.

Elsewhere, the leader of the Road Hogs (an armadillo) is warned by the rat that the farmers they talked with had the hands of warriors, and they are likely walking into a trap. The armadillo is not concerned and orders his men to advance, anyway. 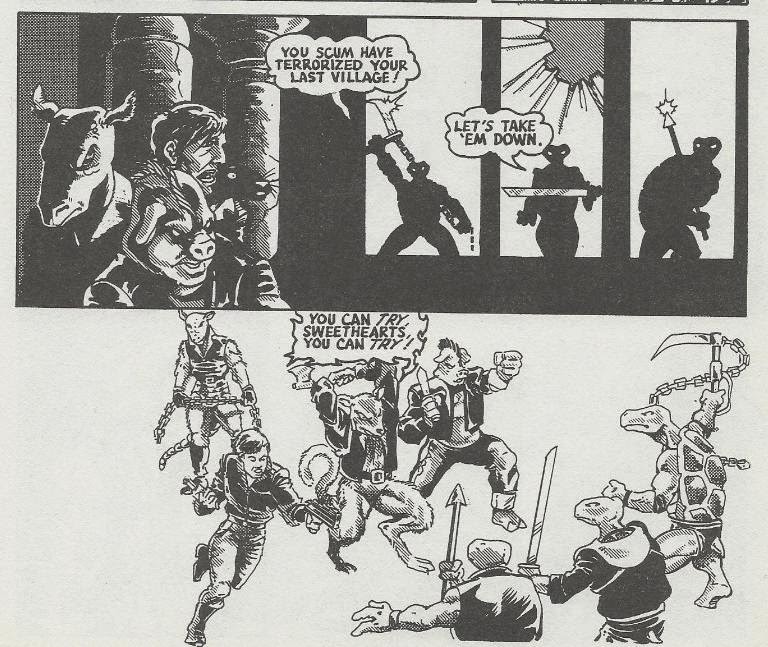 Several of the Road Hogs enter the village and find a number of farmers sitting around a table. They attack, only to discover the “farmers” to be dummies. The table then proceeds to explode, killing the Road Hogs, as the farmers look on in joy and satisfaction (from behind a statue of a mutant turtle, no less). 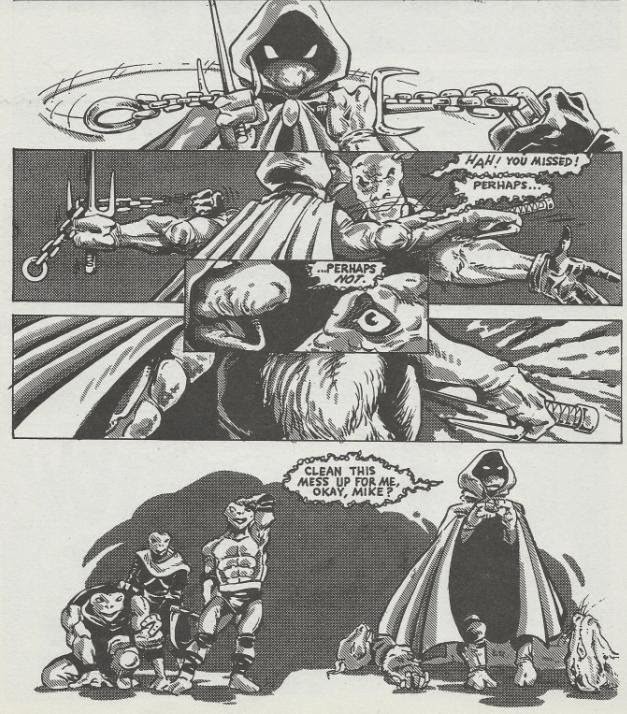 At the temple, the armadillo and his cronies (the rat, a human and a pig) are inside, looking for any strays to shoot. They are met by the trio of turtle ninja: the non-scarred male carrying a sickle and chain, the scarred male carrying a spear and several shuriken, and the female boasting a katana. They fight, with the female taking out the rat, the scarred one taking out the human and the non-scarred one taking out the pig. The armadillo, however, is tougher than his cohorts, and takes down all three turtle ninja with a bike chain. He is then approached by the hooded Sensei and whips his chain at the old codger. The Sensei blocks with a pair of sai, revealing himself to be Raphael. After a brief tussle, he stabs the armadillo through the back and kills him. Finished, Raph then walks away, asking “Mike” to clean up the mess for him as his trio of turtle ninja recover.

*Due to Raph having both eyes (and to say nothing of the setting), this story likely doesn’t take place in any established portion of the future timeline of the Mirage continuity. However, as Tales of the TMNT (Vol. 2) #69 has stated, the various futures we've seen within the Mirage continuity are all only multiple potential futures, so this could very well be one of them.

*To date, this story has never been reprinted anywhere, making it one of the rarer short strips.

I’m not a fan of tabletop gaming. I have nothing against those who pursue it as a hobby, it just isn’t my thing. I mean, I did try it once. I played “Rifts” with a few of my friends back in high school, if I recall correctly. But I just couldn’t get into it.

So with that in mind, the TMNT tabletop RPG books released by Palladium in the 1980s have never been on my list of material to track down and collect. As it turns out, several of the books contained short comic strips. Some of those strips, such as “Terror by Transmat”, were reprinted in collections like “Shell Shock”, but others were not. “Road Hogs” was one of those, and I likely never would have known it existed if Andrew NDB from the Technodrome Forums hadn’t been generous enough to shoot some scans my way (thanks, man!).

The art by an in-house creative team from Palladium (as oposed to the previous comics to appear in these books, which were by the Mirage crew) sports that dark and gritty Mirage-esque texture while maintaining an indy feel. The turtle ninja all look a fair bit different from the Ninja Turtles, having rather pronounced beaks and a lack of cartoonish facial features to enhance emoting. If it wasn’t for the “lipstick”, I wouldn’t have known the girl turtle was a girl, honestly.

I dig the idea of a senile old Raph training a crew of new turtle ninja and it’s something I’d certainly like to have seen more of. But, well, such is the nature of one-off back-up strips. And besides, this was for an RPG guide, so I imagine the point was that you were supposed to come up with your own unique adventures involving these new turtle ninja. That’s how that shit works, right?

If I had one complaint, it’s that none of the new turtle ninja are addressed by name. I don’t know if there’s any material in the guide book identifying them with individual monikers, since I don’t own the thing, but just having their names shouted out in passing would have been nice. Their individual weapons were a nice touch, though scar-face getting stuck with a plain-ole spear was a little weak. C’mon, there’s gotta be more exciting ninja weapons out there than that.

“Road Hogs” is one of those Ninja Turtles back-up strips that may be lost to the annals of time. The likelihood of Mirage ever reprinting it is slim, and maybe even slimmer since it has little to no bearing on the Mirage canon. Still, it’s a fun little tale providing a glimpse at an alternate future where Raph has gone senile, but can still kick some ass.

Grade: C+ (as in, “Could they have picked a better name for their biker gang, since the Road Hog’s only sported one pig as a member?”)