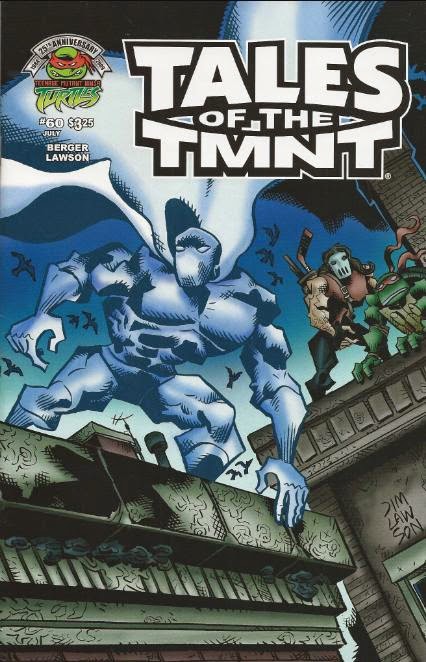 “Nobody Does it Better”

Frontispiece: A white-clad Nobody stands above a platform reading “Who is Nobody?” and waxing on about the complexities of the universe and life itself.

At the DARPA base, General Fitz has just arrived to initiate “Project Starfish”. He enters the hanger and meets with two Government spooks. One of the spooks (sporting cat-like alien eyes) remarks that “her” bio signs are off the charts and brainwave activity has increased by 70%. Fitz is concerned about the danger “she” represents, but the spook tells him that when Asteroideans are involved, danger is a given.

On the rooftop of Lucky Lucy’s Pizza in New York City, an inebriated Casey Jones is wallowing in sorrow from April ditching him. A mutated Raphael (“Gameraph”) tells him to show some damn empathy and call it a night. Casey is too drunk to care and, at the sight of a shooting star, wishes he’d never been born.

Back at the DARPA base, the Asteroidean (a giant alien starfish monster) is about to awaken. She apparently suffered a lot of damage during the attack on DARPA initiated by Mr. Braunze and is still recovering. General Fitz thinks she’s more trouble than she’s worth, but the spooks remind him that she’s the Asteroidean ambassador and diplomatic tact must be maintained in her presence. 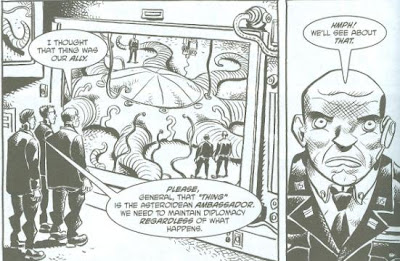 Meanwhile the “shooting star” lands in the Hudson River. Turns out it’s a giant robot. Go figure. Back in the city, a drunken Casey has had it up to here with Raph and his sympathetic ear. He takes a number of drunken swings at his best friend, which Raph shrugs off with an understanding demeanor.

And back at DARPA, they receive news about the “shooting star” in New York, but brush it off as the Asteroidean awakens. General Fitz wants a team to enter the Asteroidean’s chamber and beat her senseless, but the spooks aren’t having it. The Asteroidean ejects a projectile into the sky before settling back down to a restful state. The spooks send a team to tail the projectile.

At Lucky Lucy’s, Casey is still swinging at Raph, eventually swinging himself right off the roof. Luckily for him, Nobody suddenly appears, catches him and floats back up to the rooftop. Raph is disturbed, as Nobody is supposed to be dead. Nobody, on the other hand, only feels partly himself, claiming that he is also “The Herald”. He discovers that Casey and Raph were responsible for the Asteroidean Overlord’s injuries and telepathically communicates to her for instructions. Casey tries to slug nobody in the jaw, hurts his hand and then proceeds to pass out. 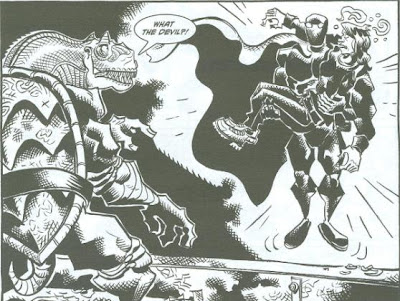 Nobody is informed that the Overlord holds no grudge and understands that the Turtles and Casey are forces for good. He then proceeds to explain what really happened when he was “eaten”. As it turns out, the Overlord was aware of the impending threat of the Triceratons invading the DARPA facility and chose Nobody to protect her out of desperation. She drew him into her belly in order to endow him with crazy powers and stuff. Unfortunately, when Casey blew her up, her progress was set back many years and Nobody was placed in suspended animation until her awakening. The process gave Nobody great power, but unfortunately, wiped most of his memory. Nobody (now talking in corny superhero lingo) declares that the Overlord is actually a benevolent being and, in turn, is hunted by evildoers from all across the Multiverse. He has sworn to protect her and uphold justice at the same time (yay justice!).

Raph is unimpressed with Nobody’s crude exposition and asks why he’s in New York if he’s supposed to be protecting the Overlord, who is in Nevada. Suddenly, the alien cyborg robot thing that crashed into the Hudson attacks! The alien is a Coleoan who wishes to devour Nobody’s brain and use its knowledge to slay the Overlord. Nobody’s newfound powers of flight, super strength and nigh-invulnerability don’t seem to be stopping the Coleoan, so after some imploring from a slightly-less-drunk Casey, Raph hurls a shuriken at the alien and cuts his breathing apparatus, causing him to suffocate in Earth’s delicious oxygen. Nobody thanks them for their assistance, but Casey says that if he really wants to thank them, he’ll change his costume. Nobody obliges, changing his threads from black to white to reflect his more peaceful attitude. He then grabs the Coleoan and flies off into the sky. 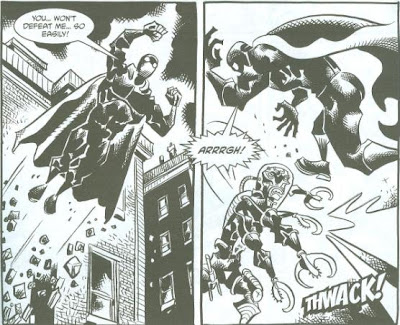 Shortly afterward, Casey and Raph hobble their way home through an alley. Slightly-less-drunk-Casey apologizes profusely for picking a fight with Raph then tells him he loves him. Raph begs him to just shut up.

*The Turtles and Casey escaped DARPA and had their memories wiped by Mr. Braunze in TMNT (Vol. 2) #13.

*Mr. Braunze returned their memories of the incident to them in Tales of the TMNT (Vol. 2) #49.

*General Fitz references a General Ifukube. Given the giant monsters in this issue, I’m gonna go out on a limb and say that was a reference to the immortal Akira Ifukube, composer for Toho’s classic “Godzilla” films.

*This issue also featured a bonus pin-up, “Casey and Leo!” by Mike Hawthorne

First order of business: Beginning with this issue of Tales (Vol. 2), Dan Berger (under the advisement of Tristan Jones) has decided to include an “Our story thus far” recap before the frontispiece in order to get readers up to speed. This…is a very, very good idea and I can’t believe it took sixty issues to be implemented. I’m not blaming anyone, I hadn’t thought of it either, but in retrospect, it seems so obvious. The stories within Tales (Vol. 2) take place at various points across the TMNT’s timeline, often picking up arcs from a decade ago, or tying up a microscopically obscure loose end. Even hardcore readers can tend to be a bit befuddled from time to time, which is even worse news for newcomers. The addition of a prologue summarizing just where we are in the Turtles’ history certainly helps to bring readers new and old up to speed. Oh, and the issue number source references makes my job sooooo much easier.

Now anyway, I haven’t reviewed a lot of stories featuring Nobody yet (so far, just the untitled Nobody story from the 1989 Tales of the TMNT Volume 1 trade paperback), so I guess I’ll get this straight right here and now: I love dat guy.

Nobody may be little more than self-aware Batman pastiche, but he’s damn amusing and a fun supporting character who never really got his due. I know I’m not the only fan who felt a bit bent when he was killed off so unceremoniously in TMNT (Vol. 2) #12. This story seems to have been built specifically for the purpose of placating those of us going through severe Nobody Withdrawal Syndrome. It most certainly comes across as retconilicious, but makes no attempt to hide that reality and revels in it to an extent (Raph’s woeful remarks at Nobody’s endless exposition, for example).

As I mentioned before, Nobody is really nothing more than an in-your-face Batman parody. Well, this issue decides to turn his character on his head and transform him into an in-your-face Superman parody. I’m honestly not so sure how I feel about that, really. I liked Nobody because he was a grim and gritty Batman wannabe; turning him into an ultra corny Superman clone takes that away. So I’m torn: on one hand, Nobody’s been brought back from the dead. On the other, he’s not the same Nobody I knew and loved. But hey, the good news is that he’s back, and as long as he’s not dead anymore, anything is possible. He may return to classic Nobody status. Or maybe not. I dunno.

The cover to this issue, though, seems to have been forged solely to throw the reader off. Raph isn't in his Gameraph form, Casey's geared up for action, and Nobody has a spectral glow about him, implying he's some sort of ghost. Covers, as we all know, don't always represent the content of the book by 100%, but this one seemed to be taking a few too many liberties. And it left me wanting a story involving ghost Nobody. Aw man.

The entire issue really read like an amusing jab at your mainstream DC/Marvel comic, with its ridiculous retcons, clear cut definitions of good and evil, awkward monologues and high-flying superheroics between corny hero and two-dimensional villain. The actual content of the story, disregarding the superficial superhero parody trappings (which are just super!), acts as one more knot tying up the myriad of loose ends left after TMNT (Vol. 2) ended. So what’s the score on that, now? Three down, seventeen to go? Ah well, at least we’re making progress. Now tell me what was up with the vision of the Turtle murdering Splinter in TMNT (Vol. 2) #1.

Anyhow, did I use the word “amusing” already? Yeah? Well good. Because that’s really the word that sums this story up. It revives a long-dead and fan-favorite character (if not with the results we were expecting) and ties up one loose thread out of a hundred, but ultimately ends up being “fun but not all that special”. So “amusing”, then.

Grade: B (as in, “But in my head, Nobody just isn’t voiced by Sean Schemmel like in the cartoon. Sorry Goku. You’re no Batman. Or Superman. Hey, wouldn’t it be awesome if Goku fought Superman? No? Yeah, you’re right. That’d be lame. I wish the internet would stop talking about it.”)