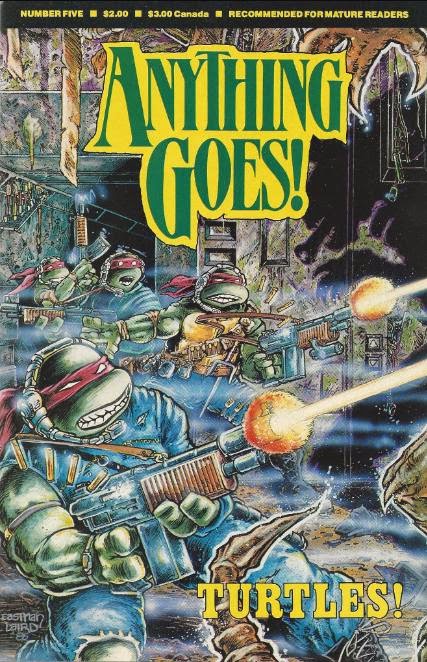 Published by: The Comics Journal

At April’s apartment in New York City, the Turtles are packing satchels full of goodies (Coke, cookies, etc.) while Don inconspicuously browses movie showtimes in a newspaper. With only half an hour until 8pm, the Turtles race out across the city rooftops. 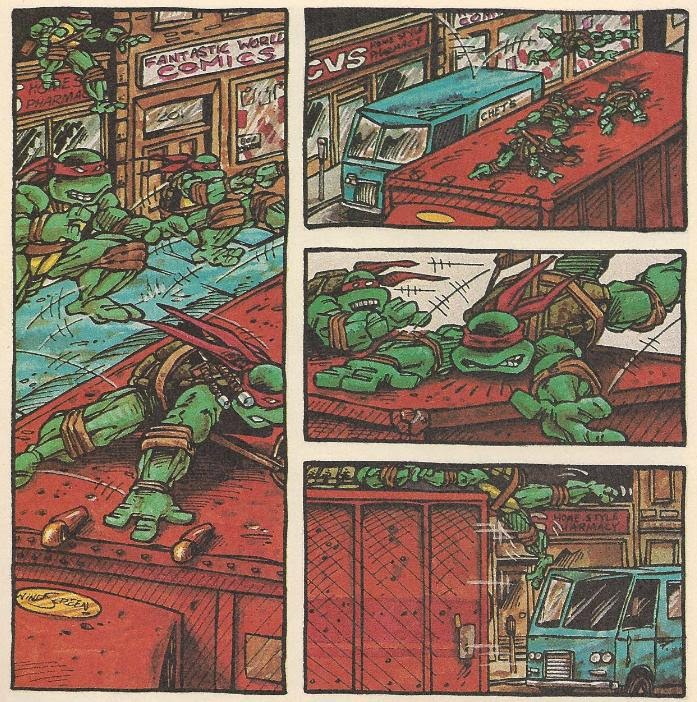 Launching themselves from the top of a CVS Pharmacy, they narrowly manage to cling to the roof of a moving truck as it heads up 95 North toward White Plains. As the truck stops at a tollbooth, they leap down and make tracks into the nearby woods. 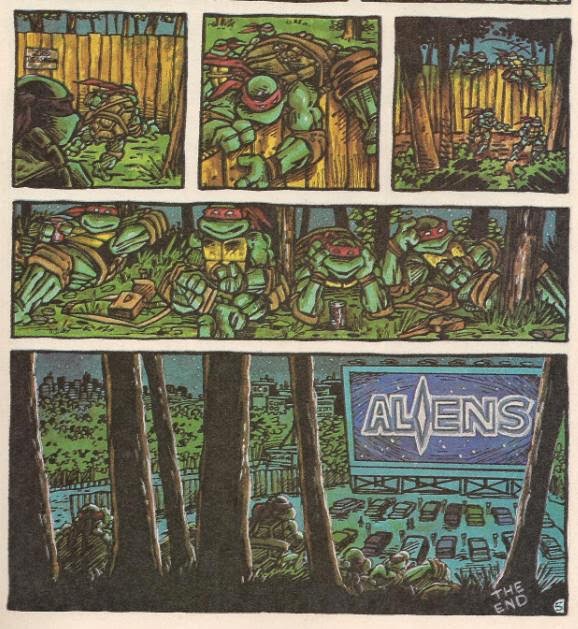 Crossing rivers, fences and overpasses, the Turtles eventually reach their destination: a drive-in movie theater showing “Aliens”. Setting themselves up comfortably on a ridge behind the car lot, they kick back and prepare to enjoy the movie.

*This story was originally printed in color. It was later reprinted in black and white for the “Shell Shock” trade paperback.

*CHET ALERT: A van features the name “Chet’s Express”. The name “Chet” is used frequently within the Eastman and Laird “TMNT” stories because…they liked that name for some reason.

*The cover is, of course, a parody of James Cameron’s “Aliens”.

I love reviewing these back-up strips because they’re so short and sweet I can knock one of these articles out in a couple of minutes. But that’s just because I’m a lazy, lazy man.

So, who here has heard of “Anything Goes!”, an anthology comic series published by The Comics Journal in the 80s? Nobody? Well, that makes all of us.

I discovered this issue completely on account of accident and luck; I asked the person at one of my local comic shops to set aside any TMNT comics she could find and I’d buy them. A couple weeks later they had two cardboard boxes full of monetary disaster waiting for me (but true to my word, I bought every single comic in them…over the course of a year or two). Anything Goes! #5 was among the comics piled high in those boxes along with a menagerie of other late '80s indie titles the Turtles had back-up strips or guest appearances in (Grimjack, The Puma Blues, Miami Mice, etc).

I thought the relationship between the cover and the actual content of the five-page story was a cute little gag and didn’t leave me feeling “bait and switched” or what have you. We see the Turtles fight aliens all the time; big whoop. One of the things I like about a number of these strips is how, well, mundane they are. Just the Turtles doing fairly (for their lifestyle) normal activities, albeit with a twist or a quirk, and giving us a little peek into what their lives are like when they aren’t battling the Foot Clan or the Triceratons. One of the things you have to understand about the Turtles is that they live in a comic book world where there’s “never a dull moment”. I mean, how many camping and river rafting vacations of theirs have been ruined by mystical bloodsucking monsters, endangered mermen or dueling alien princesses?

It’s actually a refreshing change to pace when something wacky doesn’t happen and you just get to see them chill. Er, I suppose I should save the remainder of this tangent for my imminent review of Tales of the TMNT (Vol. 2) #55, which revels in the “when nothing exciting happens its actually exciting” concept.

Anyhow, “The Road Trip” is a silent story with no dialogue or sound effects and is competently drawn and paced by the Eastman, Laird and Brown trio. The addition of color is a nice touch. The credits don’t say which one of them colored the story, but as the story takes place during sunset and twilight, whoever deserves credit did a really good job capturing that atmosphere. The black and white version of the story looks just fine and won’t rob you of any enjoyment, but as I said, the colors working with the time of day actually build an extra layer of atmosphere and, dare I say, tension as the Turtles race to make it to the flick on time.

Overall, I just wrote way too much for a five-page dialogue-less back-up strip from a forgotten '80s indie comic. It’s still a fun little story, though.

Grade: B+ (as in, “But how do they expect to hear anything without an audio speaker?”)