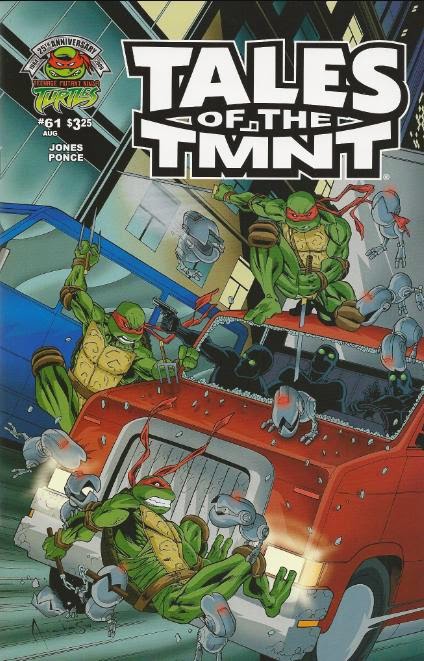 “Sometimes They Come Back”

Frontispiece: Leonardo is sitting on a rooftop reading an issue of One Piece he borrowed from Mike and having the epiphany that their lives are just as weird and bizarre as any comic book.

Amidst a pile of rubble that only moments ago was a building, Detective Whitmire sneaks off to go meet his “informant”. He catches up with an incognito Leonardo in an alley and reveals that the building collapsed mysteriously without any explosions. Whitemire shows Leo photos of other buildings that have been destroyed similarly within the past 24 hours, while passively referencing a raid on a Stocktronics warehouse. Leo asks if the problem has anything to do with the attack on the police precinct, but Whitmire hasn’t a clue. One of the other buildings destroyed, an apartment complex, was the dwelling of an accountant for Jack Trent, alias “Diamondback”. Andre Pont, as he’s called, was found with his legs both cleanly and messily removed…before the building was destroyed.

Leo seems amused that only criminals seem to be the target, though Whitmire doesn’t see the humor. Leo asks him to send everything he’s got on the subject to an e-mail address and then heads down to the sewers. Contacting Don, he says he believes the renegade Foot sect to be behind the destruction and asks his brother to take a look at the data. Don will get on it as soon as he’s done with Guitar Hero. 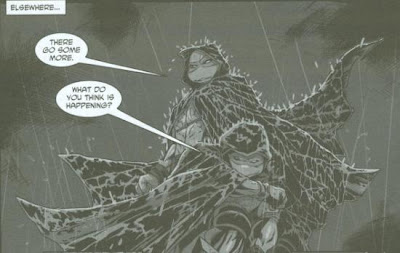 Down by the Port Authority, Mike and Raph have followed a bunch of cop cars and are investigating. They spot a shadowy group dropping a man to his death from the top of a parking structure and move in. They attempt to stop the bad guys from escaping in their van, but Mike gets zapped away by some high-tech taser. Raph hangs on and smashes through the windshield but winds up getting kicked away.

Raph and Mike make contact with Don and Leo at April’s. Raph thinks it’s the Foot Clan, though remarks that the culprits had British accents. Mike and Raph decide to chase after the bad guys as they head towards Time Square and Leo resolves to meet up with them there. Meanwhile, Don stays behind to continue looking over the data.

At a McDonald’s in Times Square, Jack “Diamondback” Trent is nervously meeting with one of his cronies. He wants out of King Cobra’s organization, though he fears what reprisals that would invite. Unbeknownst to him, the shadowy assassins are watching Jack through the security cameras. Detective Whitmire and several cops arrive in Times Square, but the leader of the assassins orders them to fire anyway. The assassins detonate all their carbombs and launch grenades everywhere, blowing Times Square to Hell. Unfortunately, Trent has survived the attack and is attempting to escape. The lead assassin sighs and prepares to use the items they stole from Stocktronics as a last resort. 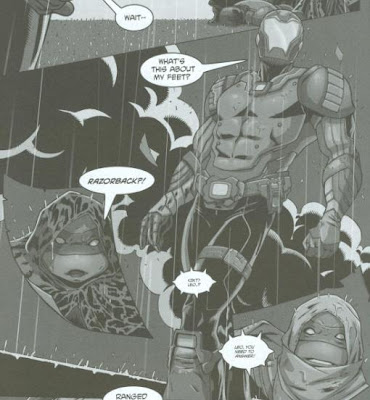 Leo and Raph finally catch up with their “Foot” adversary only to discover it to be none other than Razorback himself. The Turtles attack, but aren’t expecting Razorback to unleash a new set of powers: gooey, extendable arms. Apparently, the Department of Defense had him in an experimental weapons program or something. Razorback hurls Leo off the top of the building, forcing Raph to dive over the edge to rescue him. In true supervillain fashion, Razorback explains his ingenious plan to the Turtles as they helplessly cling to the side of the building. Apparently, Trent has a chip located in his abdomen that can access a healthy bank account. Razorback wants it. 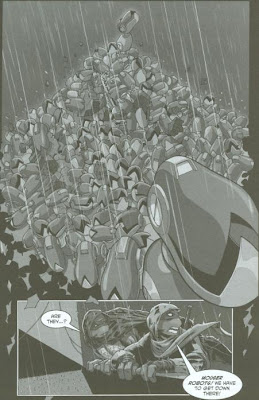 With that out of the way, Razorback orders his troops to activate the mousers. Don finally arrives and finds Detective Whitmire within the chaos. He has discovered what’s caused the buildings to collapse, but before he can explain, a swarm of mouser robots erupt from beneath the city streets. Mike finally arrives (accompanied by explosions) and the Turtles tell Whitmire to find Trent and get him to safety since he’s the target for the mousers. By happenstance, Trent finds Whitmire and begs to be taken into police custody for protection. 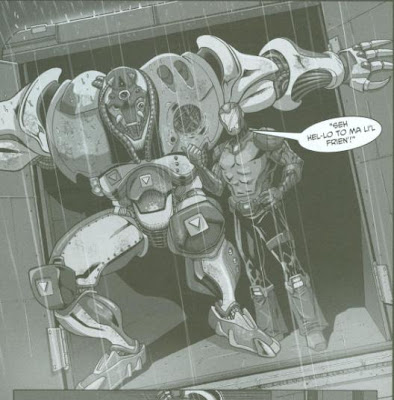 The Turtles highjack an ambulance and chase after Razorback’s van. Unfortunately, Razorback has one other piece of purloined Stocktronics tech: Baxter Stockman’s robot body. Luckily for the Turtles, it was actually Stockman’s prototype robot body and is easily destroyed when it crashes into the ambulance. Frustrated, razorback opens a round of plasma fire from his crazy sci-fi arm thing. Leo climbs on top of the ambulance, chops Razorback’s arm off and then bursts the van’s tire, causing the villains to crash into a dump-truck. All the mousers in Times Square suddenly deactivate, and with good reason: the crash decapitated Razorback (he had been controlling them with a cerebral implant, you see). Hearing the approach of police sirens, the Turtles escape into the sewers.

Six hours later, in Arlington, Virginia, the pieces of Razorback have been recovered and the Department of Defense succeeds in putting him back together. Snickering, Razorback tells an unseen person named "John" it was nice seeing them again.

*The attack at the police precinct happened in Tales of the TMNT (Vol. 2) #36.

*According to author Tristan Jones, the unseen Government employee named "John" that Razorback greets is a reference to John Bishop, villainous Government spook character conceived for the 4Kids TMNT cartoon series. Bishop will later be seen in the short story, "Slash!".

Tristan Jones' “Gang Wars” arc continues. In reality, though, this issue seems more like a sequel to Tales (Vol. 2) #50 than the next chapter in the story arc, acting as a bit of a diversion from the main plot. Not a negative critique, mind you, as Tales (Vol. 2) #50 was a great issue and it’s sweet to see that thread called upon again. And even as a bit of a breather piece, it still references plenty of events from the surrounding “Gang Wars” arc so that it actually feels relevant and not so much like filler.

The big draw with this story is, of course, the return of the mousers. The mousers have always been used in small doses wherever they've show up. In the 80’s cartoon, they were never seen again after the first season. The 2003 series used them almost as sparingly, allotting them only a handful of appearances after the first season (and yeah, that’s including the “organic mousers” from Fast Forward). And what, they only appeared in, like, one level of TMNT Arcade, right?

I suppose there’s just not a whole lot you can do with the things. They’re itty bitty biting robots and that’s about it. Jones finds a reasonable means to return them to the Mirage universe, employing them in a fashion that both calls back to their first appearance in TMNT (Vol. 1) #2 and doesn’t succumb to the dull foil of relegating them to bloodless cannon fodder for the Turtles to smash up. As a matter of fact, you hardly see them at all in this issue. Their handiwork is an ever present plot point, but when the mousers at last reveal themselves at the end of the story, they’re deactivated almost as quickly. So, I suppose if you opened this comic up expecting an epic battle between the Turtles and the mousers and instead got a story revolving around the somewhat dull Razorback, you might leave feeling unsatisfied. Myself, I enjoyed the way the mousers were utilized, though I might have liked a few more panels of the Turtles going at it with them.

This installment also provides some elements you may have felt were missing in the last chapter, Tales (Vol. 2) #59. The focus is from the TMNT’s point of view and they’re all over the spotlight rather than lurking in the shadows. No subtlety, here. Detective Whitmire, who I felt has been something of an underdeveloped character since his debut, gets some more page-time and room to grow, even if we don’t really get to see any other dimension to him outside of “hardboiled cop”.

Overall, Tales (Vol. 2) #61 was a fun diversion from the ongoing antics of the Gang War and a welcomed call back to several older stories. Can’t say I know for sure how relevant the events are going to be to the actual ongoing "Gang War" arc, but you can’t go wrong with explosions and robots. And Andreas Ponce’s art is as kickass as ever.

Grade: B (as in, “But for a split second there at the very end, I thought that was the Rat King the government was rebuilding”.)