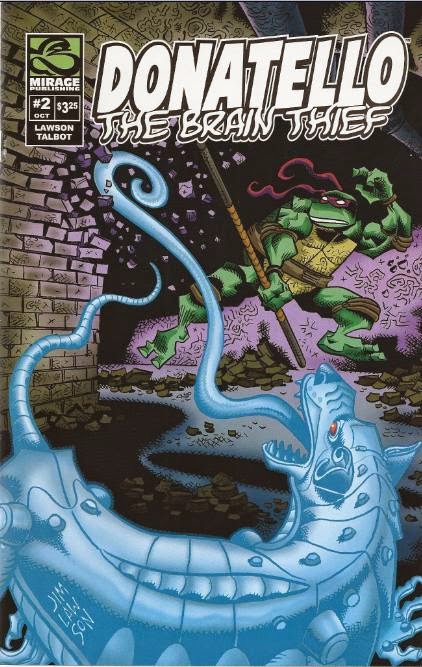 With the giant robot cockroach pinning him down and slowly moving a buzzsaw toward his head, Donatello focuses all his energy and manages to flip the robot bug off of himself. The bug retaliates, hitting him hard and collapsing a brick wall on top of the Turtle. It then scuttles off.

Don digs himself out and hypothesizes that the cockroach, despite being an advanced robot, didn’t have the thought capacity to reason that Don was buried under the rubble. Picking up a small piece of the robot that got chopped off, Don returns to his secret lab. Don tries to see if the remains of Baxter’s robot body might react in a similar way with a real roach, but nothing happens. 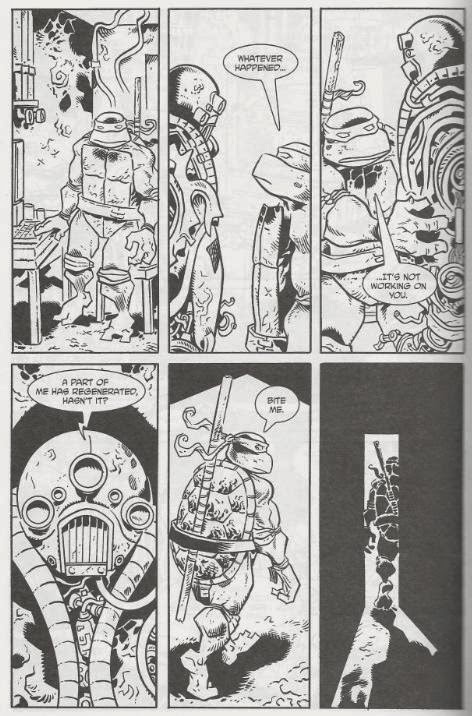 Don then proceeds into the room where he’s storing Baxter’s brain. He’s run a de-encryption program on Baxter’s robot body and divulged its secrets. He had created a nano and biotechnological substance called “grey goo” that can replicate organic lifeforms for self-preservation. Baxter asks if a part of his robot body has begun to regenerate. Don tells him off and leaves the room. 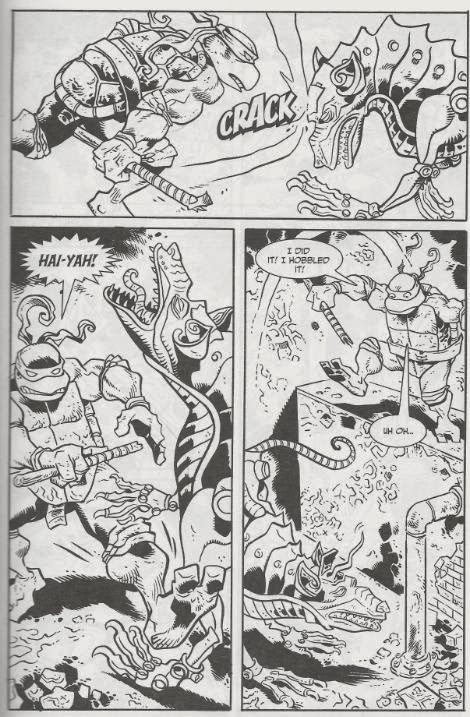 In the sewers, the robot roach catches and assimilates a rat. Don happens across the robot rat and the piece he had collected earlier wiggles free and returns to its larger counterpart. The robot rat then spots Don and attacks. The two fight and Don manages to escape through the high ground. As he looks back, he notices that inside the robot rat’s skull is a tiny organic rat brain. 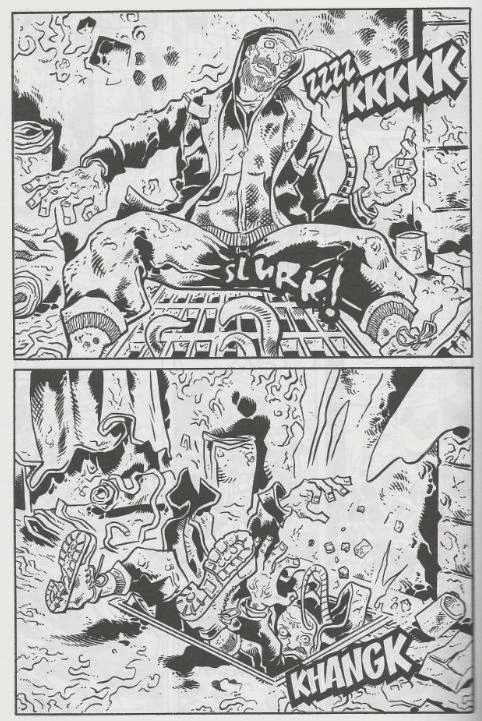 Outside, the same hobo who had been scared by the strange sounds from the sewers earlier decides to settle down on top of a nice, warm storm drain grate. The robot rat happens to be below him, though, and with one of its mechanical tendrils, reaches through the grate, stabs the hobo in the brain and pulls him into the sewer for assimilation.

So, the story’s still going along, but I don’t feel like I have a whole lot to say. It’s so very, very decompressed that there’s hardly any content in the issue to speak of. I suppose it makes for a more cinematic atmosphere, but for $3.25 I’d like a book to take a little longer than 3 minutes to read.

We get a bit more interaction between Don and decapitated Baxter Stockman, which is what I’m really here for. Their encounter was disappointingly brief, but Don’s reaction to his inquiries (“Bite me.”) was gold. His reluctance to speak with Baxter is understandable, considering that at this point in the timeline Raph is still missing, the Turtles are frustrated and Don just doesn’t have the time to chat or screw around.

The bits with the robot cockroach/rat are…dull, thus far. This issue reveals that Donatello isn’t the titular “brain thief” (despite having stolen Baxter’s brain and hung it on the wall in his lab, morbidly enough) but that it’s Baxter’s liquid metal robot offspring. I’m looking forward to seeing where that ends up; if the robot tries to re-assimilate with Baxter or if, by stealing a human brain, it gains sentience and becomes something else.

I just feel like Lawson only has two issues-worth of story that he’s stretching out to fill four, that’s all.

Grade: C (as in, “C’mon, man, I can only take so many panels of Don running down a sewer tunnel”.)