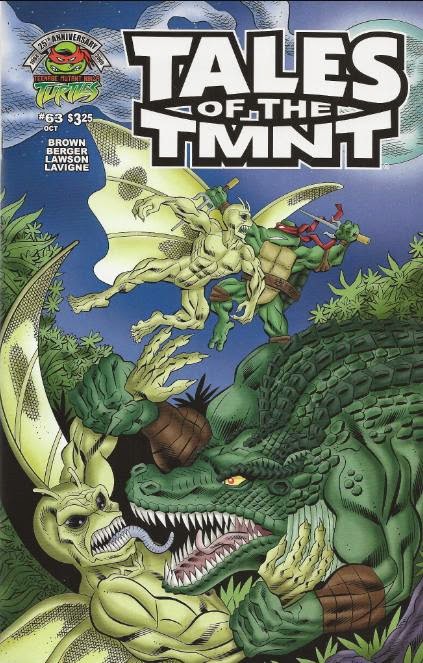 Frontispiece: While giving trick or treat candy to a real pixie, Don recalls how so many things he thought were make-believe have turned out to be real over the years, including all the scary ones.

Down in Australia, the Turtles and Leatherhead have succeeded in hurling their cybernetically enhanced foe, Marlin, into a swamp full of ravenous monsters. Marlin chops off his cybernetic leg as the monsters attack it and escapes through a drain he’d installed.

Emil Tendaji and his troops have tranquilized Leatherhead for the purposes of transporting him out of Australia safely and everyone, including the Turtles, board a helicopter for extraction from the island. 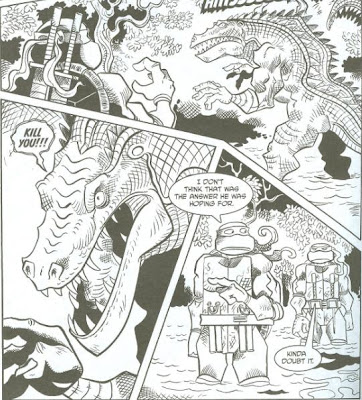 At his hideout, Marlin repairs himself with a new cybernetic arm and leg, grabs a bazooka and tries to blow up the helicopter the Turtles are in. He only succeeds in nipping the propeller, downing the chopper in a swamp. Marlin decides to continue the hunt as Leatherhead wakes up and freaks out. Leo calms Leatherhead down while Emil encourages them to hurry, as there are monsters in the wilderness on this island. As they march, Emil remarks that Razorback has escaped custody. Leatherhead’s eye has apparently healed and he explains that when he was captured by Marlin, he was injected with a chemical that causes rapid healing.

Suddenly, mothmen attack! Hey, it happens. Don neutralizes the inhibitor chips Marlin implanted in them before they can make off with any of Emil’s men and the team carries on. Marlin then attacks in his hover-saucer-thingy. Raph fells it with a single well-thrown sai. Leatherhead then seizes Marlin, but rather than kill him, he turns him over to Emil for legal retribution. 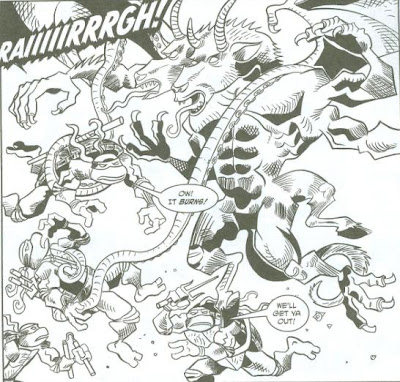 The group make it to the new extraction point at the edge of the island, only to discover all of Emil’s men dead or injured. Turns out the place was attacked by a three-headed devil-thing. As the Turtles fight the devil, Marlin breaks out of his cuffs and escapes on a boat. As Leatherhead goes toe to toe with the devil, Marlin decides to turn around and riddle the gator and the devil with machinegun fire. As he gloats over his revenge and escape, though, the Loch Ness Monster pops out of the water and gobbles him up. 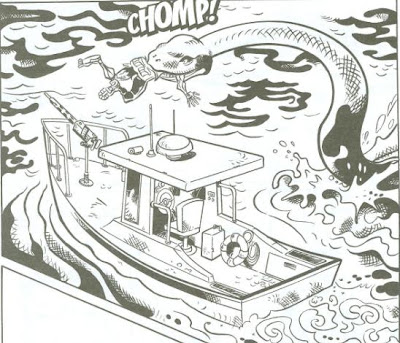 Two weeks later, at the Species Protection and Relocation Establishment in Dzoumogne, Mayotte, Emil walks in on the Turtles and Leatherhead, who have at last recovered from their injuries. Emil then assures them that he’s made arrangements for them all to return to New York safely. As they leave, the Turtles ponder that Marlin is still alive and is likely the luckiest man in the world. Marlin, however, is still inside Nessie’s belly.

*Depending on what fork in the continuity road you take, the Turtles will either meet Leatherhead again in TMNT (Vol. 3) #17 or Tales of the TMNT (Vol. 2) #62.

*This issue also featured a bonus pin-up, “Get Those Turtles!” by Paul Maybury and a back-cover pin-up of Don, Leatherhead and the devil by Ryan Brown.

Tales of the TMNT #50 was a fun issue with some killer art and a nice tie-in to earlier TMNT continuity (with elements that would turn up in later Tales issues, as well). “Monster Island” comes across as a bit of an unnecessary follow-up, to be honest, as it doesn’t succeed in accomplishing anything that wasn’t accomplished in Tales #50.

When all is said and done, Emil is still escorting Leatherhead and the Turtles back to New York, Razorback has still escaped and Marlin is still missing and presumed dead. We’re right back where we were when Tales #50 ended. It’s as if this entire adventure could have never happened and we’d be just fine without it.

And, well, to be frank, what exactly did we even get out of this story? The Turtles and Leatherhead fighting more monsters? So “Monster Island” amounts to little more than mindless action with no value to any sort of overall storyline. That means that as an individual issue, it’s only saving grace is its artwork, but with pencils having been provided by Jim Lawson, you’re either going to love it or hate it, considering how divided opinion is of his current art style.

It looks well-enough, and while I still can’t say I like the way he draws people, Lawson’s sense of dynamic style, layouts and action sequences are masterfully done (at least when he has a good writer reigning in his tendency to decompress to the point of wasted pages). The lack of duo tones still makes his issues look like a coloring book, though.

Overall, I can’t say it wasn’t an entirely un-amusing tale. Marlin’s comeuppance in this issue seemed far more satisfying than his supposed demise from Tales #50, so I enjoyed that. Paul Maybury’s bonus pin-up, “Get Those Turtles”, is cool as all Hell. In the end, though, the entire story was completely unnecessary. And with Tales (Vol. 2) ending at issue #70, is there really any time to waste?

Grade: C – (as in, “Come to think of it, this issue succeeded in explaining how Leatherhead’s bad eye heals. So it’s got that going for it,”)