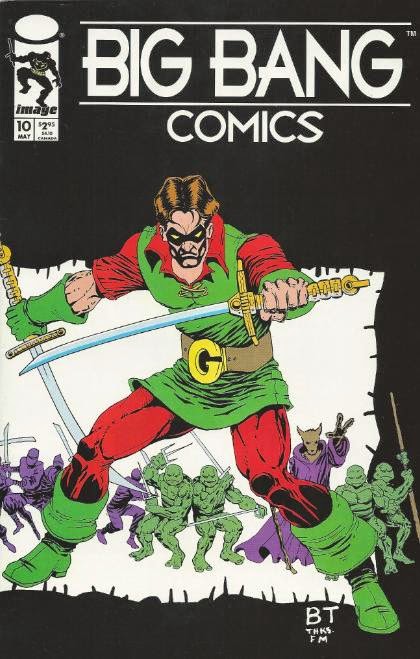 In New York City, a superhero named Galahad has been tracking a mysterious and talented assassin named Headhunter from his hometown of Midway City. Apparently, Headhunter murdered his boss, District Attorney Terry Todd, and he wants payback. Tracking Headhunter to a seedy hotel, he smashes in through a window to find a man and a woman in bed together. The man has heard of Galahad and is prepared to fight, while the woman runs and hides in the bathroom. The man appears to be a ninjutsu master and wipes the floor with Galahad. Galahad, luckily, is armed with his taser, “Excalibur”. The man says Galahad is without honor, but Galahad is in search of revenge, so he could care less and zaps him. When Galahad mentions Terry’s name, though, the man has no clue who he’s talking about. 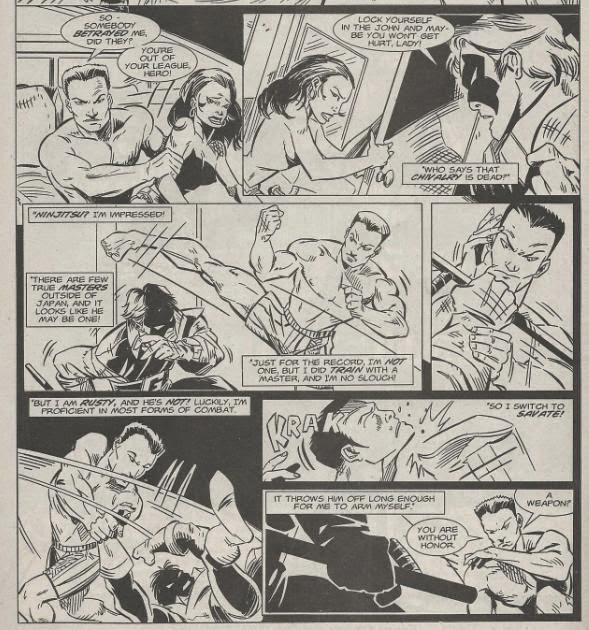 As Galahad begins to question whether he’s actually beating on the right guy, an arrow suddenly strikes the handle of Excalibur. He turns around to find the woman he thought was cowering in the bathroom armed for combat. She’s Headhunter, apparently, and the man in bed with her (a local crimelord) was actually her next target. She decides to kill Galahad for interfering and the two wrestle. Galahad accidentally throws her off the building and freaks out. He’s a lawyer in real life and doesn’t believe in executing criminals. 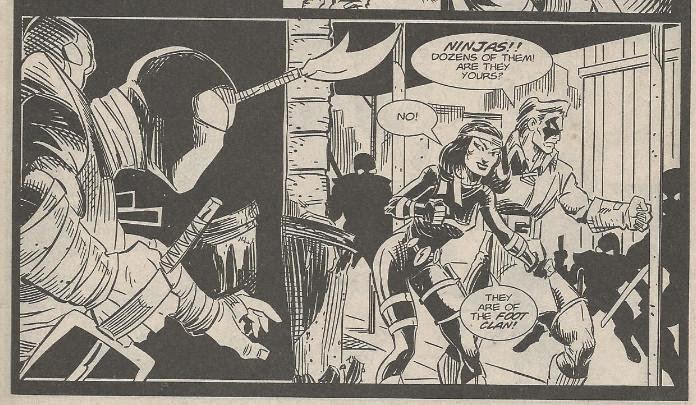 He rushes to the street and finds her unconscious, but alive. She’s playing possum, though, and Headhunter catches Galahad off-guard. Their fight is interrupted by the sudden arrival of several Foot Soldiers. Headhunter explains to Galahad that the Foot Clan are a Japanese gang who have recently become major players in the New York underworld thanks to a brilliant leader. Turns out, the man Headhunter was trying to kill was Oroku Saki, leader of the Foot Clan. Saki steps forward in his full Shredder armor and orders his Foot Soldiers to kill the pair. 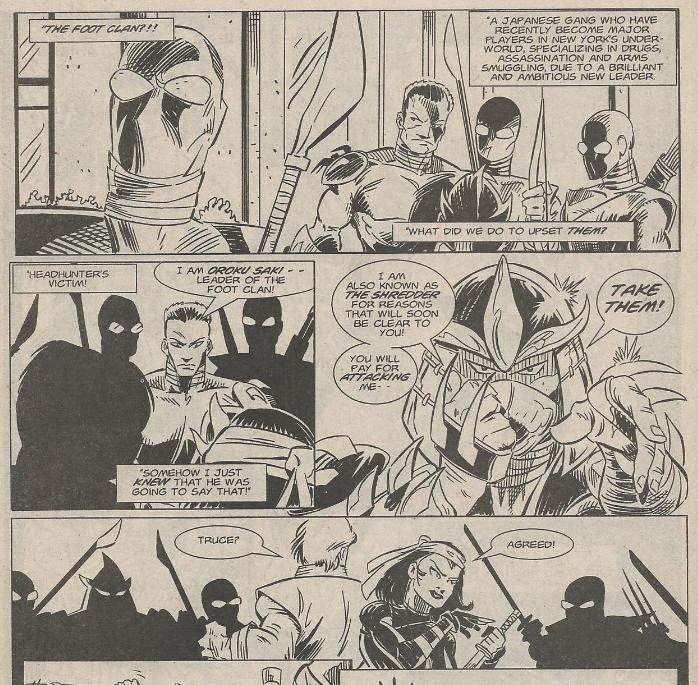 Galahad and Headhunter call a truce and begin battling the Foot Clan. Galahad fights his way to the Shredder and explains that he’s only after Headhunter. Shredder refuses to give her up, saying they have unfinished business. Galahad then takes three arrows to the back and a bo staff to the head. As Galahad falls face first to the ground, Headhunter berates him for not taking the Shredder down when he had the chance and angrily calls their truce off. As Headhunter escapes, Shredder orders two of his Foot Soldiers to finish off Galahad while the rest go after Headhunter and bring her back alive. The Foot Soldiers decide to do a half-assed job and just dump Galahad’s body into the sewers.

Downstream, a very, very young Michelangelo and Leonardo are fishing (good luck with that). Mikey snags something that turns out to be Galahad. Raphael then shows up (thinking it was an alligator he could beat with a stick). Unimpressed with yet another dead body in the sewers, the three Turtles fish him out and argue over who he might’ve been (Mikey thinks he’s a cowboy because he has arrows in his back). As Leo attempts to remove Galahad’s mask, the superhero comes to life and grabs Leo’s hand. Raph is about to beat him with his stick when Splinter intervenes. Splinter and the Turtles then aid the injured and confused Galahad back to their lair. 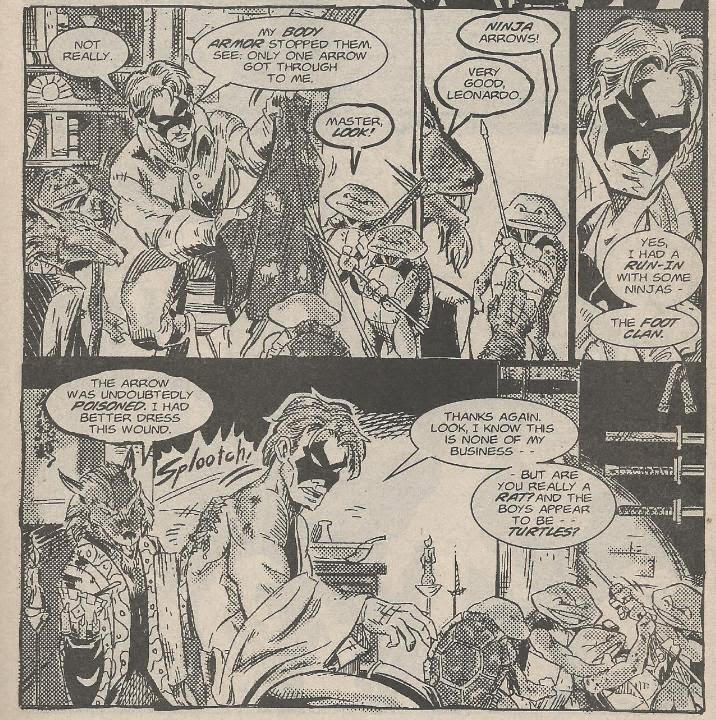 Revived by some herbal tea, Galahad reveals that his body armor stopped all but one of the arrows. Leo identifies them as being of ninja design and then all four Turtles begin fighting over who gets to keep the arrows. Galahad explains to Splinter that he had a run-in with the Foot but then finally breaks down and has to inquire just what the Hell is up with all the talking animals. Splinter tells his origin to Galahad: Hamato Yoshi, the Foot Clan, Oroku Saki, the ooze, you know the drill. Galahad is surprised to hear the name Hamato Yoshi, as his mentor had trained under him as well.

Splinter than leads him to just below a shoe store that’s secretly operated by the Foot (HA!) and bids him good luck on his confrontation with the Shredder. Galahad thanks Splinter for his help and leaves. Splinter sighs that Galahad’s code of honor will not allow him to kill the Shredder and resolves to teach his children the more deadly arts for their inevitable confrontation with their foe. As they go back to the lair, the Turtles all agree that Galahad’s mask was just awesome and decide to make some for themselves. 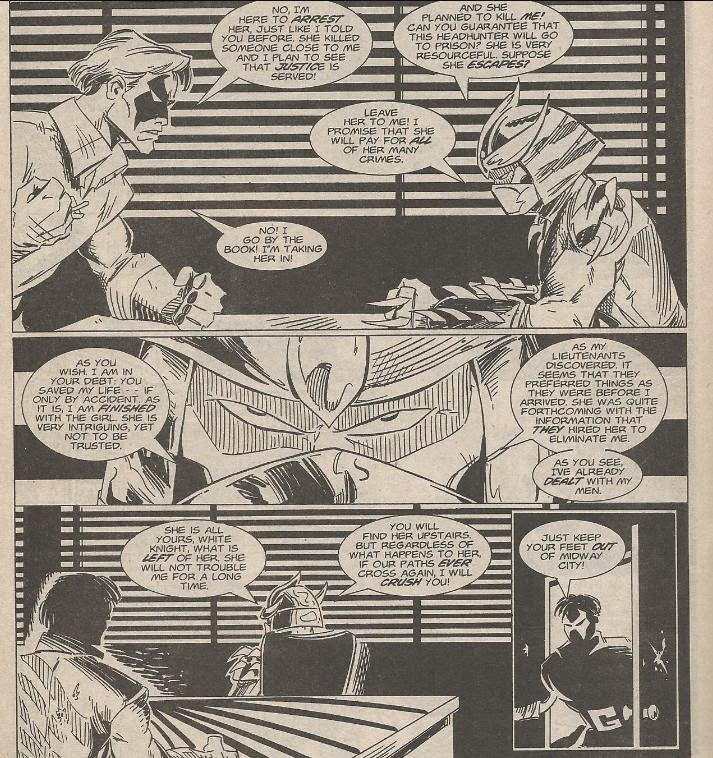 Galahad cautiously enters the shoe store and finds seven Foot Soldiers dead; slashed to death presumably by Headhunter. Galahad then finds the Shredder, sitting behind a desk. Shredder asks if "the White Knight" has come to rescue his damsel in distress, but Galahad insists he’s here to arrest her. Shredder is reluctant to give her up, as she’s a threat to his life and he doesn’t believe any prison can hold her. Galahad insists, leaving Shredder no choice…but to hand her over? It seems that he owes Galahad a debt of honor for (accidentally) saving his life when he was in bed with Headhunter. At any rate, he’s done with Headhunter, anyway. After an interrogation, it seems that seven of his Foot soldiers, unpleased with Shredder’s leadership, hired Headhunter to deal with him. Shredder, in turn, dealt with them. Shredder then tells Galahad to go collect Headhunter and then never cross his path again, lest he be forced to kill him.

Galahad finds Headhunter in an interrogation room, badly beaten and with a sai sticking through her hand. Galahad arrests her and is about to bring her to a prison hospital when she offers "a deal". Galahad refuses anything she has to offer, so Headhunter responds by knocking him out. Giving him a kiss, she promises to come back for him some day after she’s healed from her interrogation.

A few days later, Galahad swears over Terry’s grave that next time Headhunter shows her face anywhere in the world, he’ll take her down.

*The Turtles will eventually have their showdown with the Shredder in TMNT (Vol. 1) #1.

*If one were to include this with Mirage continuity, it would have to take place before “My Hero!” from Tales of the TMNT #25, as the Turtles appeared with bandanas in that story and this one explains why they decided to wear them.

*This issue also featured three other stories: “Knight Watchmanga” by Chris Ecker and Chris Samnee, “The Blitz and Speed Queen” by Terrence Greip Jr., and “The Invincibles” by Roy Thomas (the Conan guy?).

When I first read through all of the Image TMNT series, I wasn’t aware that this comic existed. I even failed to notice the editor’s note in TMNT (Vol. 3) #9 saying, “Hey moron, go and read Big Bang Comics #10”. As it stands, I really wish I had found this thing the first time around, as not only does it help the whole Galahad cameo in the Image series make sense, but it’s actually a pretty cool story that ties into TMNT (Vol. 1) #1 rather nicely.

There’ve been a lot of “young Turtles” stories over the years, especially via Tales of the TMNT (Vol. 2). And yet, absolutely none of them feature any stories involving the Foot Clan prior to that issue. The only one that comes to mind is Tales of the TMNT (Vol. 2) #44, “The Amulet”, which deals with a young Karai (but no Turtles). So as you can see, stories like this are terribly rare.

Gary Carlson, writer for Image’s volume of TMNT, proves he’s a master of his craft, finding a lot of novel ways to tie this little prequel into the Mirage series as well as his own Image series. I was never much of a fan of Knight Watchman or Galahad, amusing parodies though they were, so any larger scope this story might have accomplished involving their own series ufortunately goes zooming over my head. But from the Turtle perspective, Carlson finds some clever ways to work both the Foot and the Turtles into this story without having them meet (since they can’t meet before TMNT #1 and all). Their encounter with Galahad spurring Splinter to train the Turtles in the deadly arts and the Turtles deciding to model their bandanas after superhero masks was a nice touch.

Since I’m a bit sick of the “young Turtles” stories, I found the stuff with Oroku Saki far, far more interesting. As we all know by now, the Shredder never really got an opportunity to do much of anything in the Mirage series since he, you know, died in the first issue and all. So just getting to see some more of him was a treat, especially seeing him portrayed as competent, ruthless and, oddly, honorable. Headhunter-herself wasn’t the most impressive of characters, amounting to little more than a generic “hawt” assassin ninja bitch archetype. And dammit, we’ve got enough of those in the Turtles universe.

Clarence Burk’s art is very dynamic, though a bit too loaded with panels per page. They’re kind of all over the place, too, but it’s not a big deal. Bronzman’s inking shines best in the scenes within the sewers and (especially), Galahad’s confrontation with the Shredder at the shoe store. Prior to that, though, there’s just way too much empty white space. That might be the fault of Burk for not drawing enough backgrounds for Bronzman to ink, I dunno.

Anyhow, all things considered, this is one of the best “young Turtles” stories available, even if it mostly just pertains to the continuity of the Image series. I’d highly recommend tracking it down, even if you don’t have a whole lot of interest in the Image series, as it ties in with the Mirage series very nicely and harmlessly to continuity. It’s a fresh change of pace from the usual young Turtles stuff and, perhaps most importantly, gives us a rare look at Mirage Shredder before he died like a punk in his first appearance.

Grade: A- (as in, “Although the cover promises teenage Turtle action and all we get is cutesy bug-eyed toddler Turtle action”.)