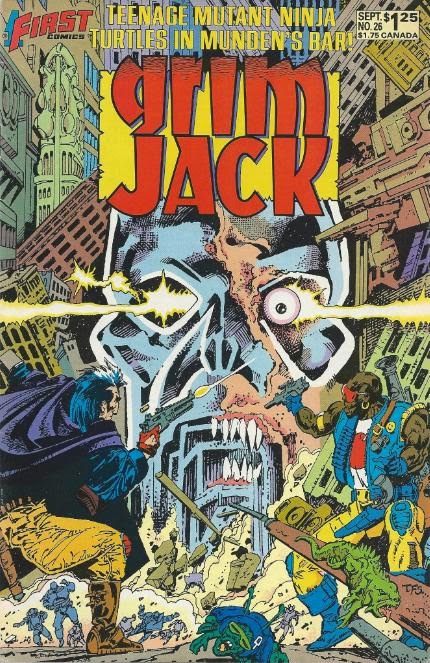 On the planet D’Hoonib, the Turtles and Professor Honeycutt (the Fugitoid) are desperately searching for a bar so they can hopefully join a starship crew and escape the Federats who want their heads. They find “a bar” (see Turtle Tips for details) that looks to be no bigger than a closet. When they press the entrance button, however, they step inside a massive tesseract (the Fugitoid explains that the bar exists in a pandimensional nexus, allowing entrances to it to appear in multiple places, regardless of space constraints). 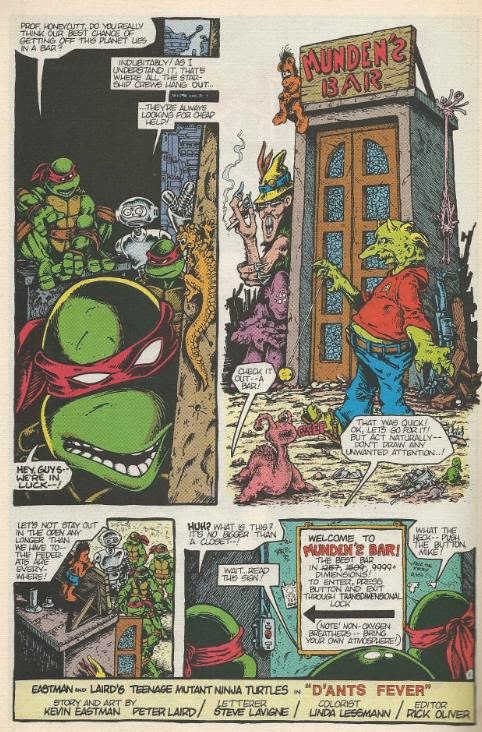 The Turtles soon cross paths with a busty dame who agrees to introduce them to a Captain she knows. The Captain offers them a place on his freighter ship, but before the deal can be struck, a giant alien brute tells Raphael that he’s in his seat. Always the hothead, Raph picks a fight with the monster, not realizing that he’s the First Mate of the Captain’s ship and Raph actually is sitting in his seat. Before the two can fight, the dame slips Raph a Qwik-Gro pill, allowing him to spring up to the First Mate’s imposing height. Not to be outdone, the First Mate grabs the bag of pills from the dame, spilling them all over the floor, and takes one. The dame tosses Raph another one and the pair eventually grow to a size that the bar can barely contain. 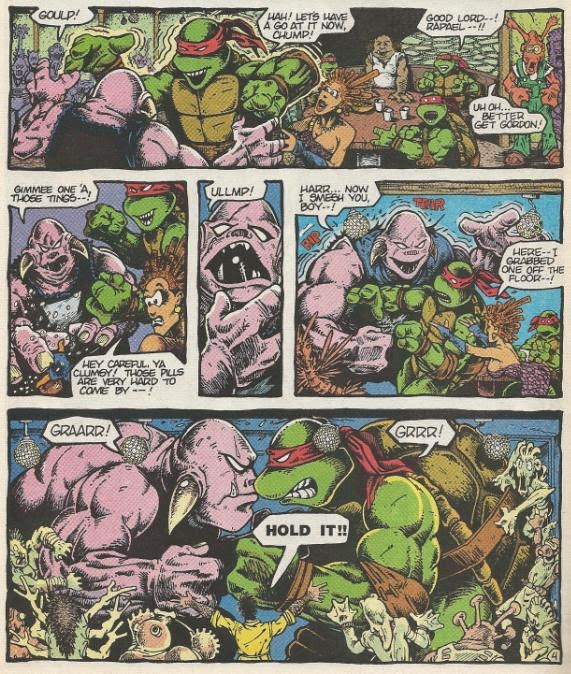 Sensing trouble, an alien patron runs to get the “guy in charge” (see Turtle Tips for details) who tells Raph and the First Mate that fighting is prohibited in the bar. If they have issues, then there’s only one way to settle it: A drinking contest. Raph and the First Mate return to their proper heights, drink themselves senseless and happily sing songs together.

Suddenly, M.C. Chet announces the bar’s first official dance contest. As everyone begins to rock out with their cock out, a tiny D’Ant sits on the floor with a wine cooler, pouting that he’s too small to dance with anyone. He finds one of the discarded Qwik-Gro pills and takes it, popping up to a dashing, lady-killing height. Unfortunately, Qwik-Gro pills have a negative effect when combined with wine coolers and the D’Ant transforms into a hairy, tentacled monster. 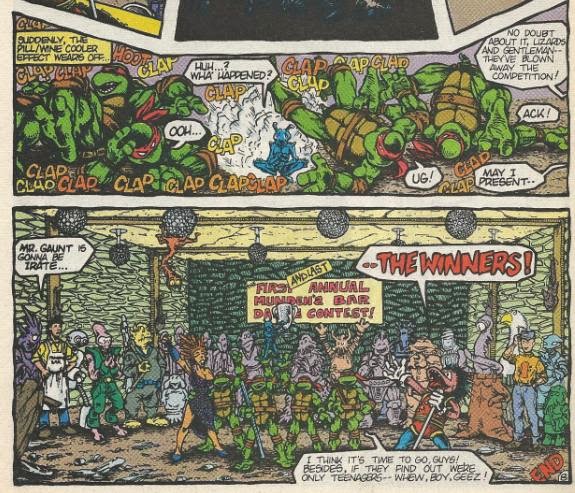 The dame asks Raph and the Turtles to stop the D’Ant before he can hurt himself or anyone else. The Turtles tackle the D’Ant monster, only to get flung around by its tentacles. Chet misconstrues the situation as a bitchin’ new dance number and announces the Turtles and the D’Ant as winners of the contest. As the D’Ant returns to normal, everyone cheers (except the "guy in charge"). The Turtles decide to sneak out and find a different bar before anyone realizes that they’re actually teenagers and have been drinking underage.

*This story was originally published in color. It was changed to black and white for its printing in “Shell Shock”. Additionally, for that printing, all references to “Munden’s Bar” were changed to “Rick’s Dive” for legal purposes, as Munden’s Bar is owned by the creators of Grimjack; sometimes to hilarious effect, as the words “Munden’s Bar” on Gordon’s/Rick’s apron are crossed out with what looks like a few swipes of a Sharpie, even leaving behind several incriminating letters.

*Additionally, the character of “Gordon” had his name changed to “Rick”. Er, except in one panel, where it wasn’t. He also goes from being merely the shift manager to the bar's owner between versions. Also, his line at the end, “Mr. Gaunt is gonna be irate…” is changed to just a simple “What a night!”

*For the “Shell Shock” reprint, the jokes on the sign outside of the bar were also changed completely. For the Grimjack printing, the sign reads: “Welcome to Munden’s Bar! The best bar in 1257, 1509, 9999+ dimensions! To enter, press button and exit through transdimensional lock (Note: non-oxygen breathers – bring your own atmosphere!).” For the “Shell Shock” printing, the sign reads: “Rick’s Dive. No Standards. No Morals. No Ethics. No Conscious. Enter at your own risk.” I’d like to think they meant “No Conscience”, but who can say?

*The index in “Shell Shock” mistakenly lists this story with the title of “Rick’s Dive”, though “D’Ants Fever” can still be seen at the bottom of the first story page.

*CHET ALERT: The M.C. of the dance contest identifies himself by the name “Chet”. There’s also a crate behind the bar labeled “Chet’s Old Time Brew”. “Chet” was an in-joke slipped into several issues of TMNT by the Mirage staff simply because…they liked the name.

Well this was a weird one, wasn’t it? Most of these TMNT short comics exist between issues or way off in Crazy Land some place. Not very many actually work themselves in-between pages of actual issues. To “D’Ants Fever’s” credit, it actually pulls it off fairly well without disrupting the narrative of TMNT #5 (not too much, anyway).

The story itself is just a silly comedy relief bit meant to appeal to the fans of the Munden’s Bar tales in Grimjack. With that in mind, the “Shell Shock” version sort of loses something in the transition, dropping all references to Munden’s Bar and what I’m assuming are also characters from that series (“Gordon” and “Mr. Gaunt”). The alterations are pretty inconsistent, as they go out of their way to change signs and jokes completely in one panel, while in others they just make due with a scribble from a Sharpie. It doesn’t really matter which version you read, but I think I prefer the Grimjack one since the color is quite nice and there’s no ugly Sharpie smears. Like so: 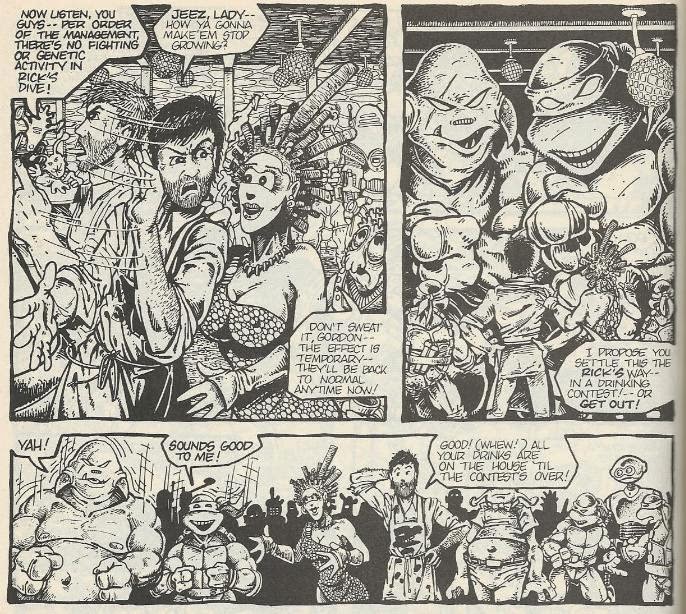 The art, though, is probably the most alluring thing about this short. Eastman and Laird really let fly with their goofy sides as the various aliens are just all sorts of crazy. Every inch of space seems to be filled with weird creatures of all shapes and sizes, reminding me a bit of illustrations from Mad Magazine and Tales from the Crypt, if you know the ones I’m talking about. At any rate, the story is a rather nice hybrid of Eastman’s and Laird’s different interpretations of “sci-fi”. Laird’s “I love Star Wars” gags are all over the place, but accentuated by Eastman’s “Heavy Metal” influences.

On a visual level, “D’Ants Fever” is very unique among the stable of short TMNT comics and definitely one of their more impressive-looking efforts. The bar sequences in TMNT #5 definitely pale in comparison to this story, anyway.