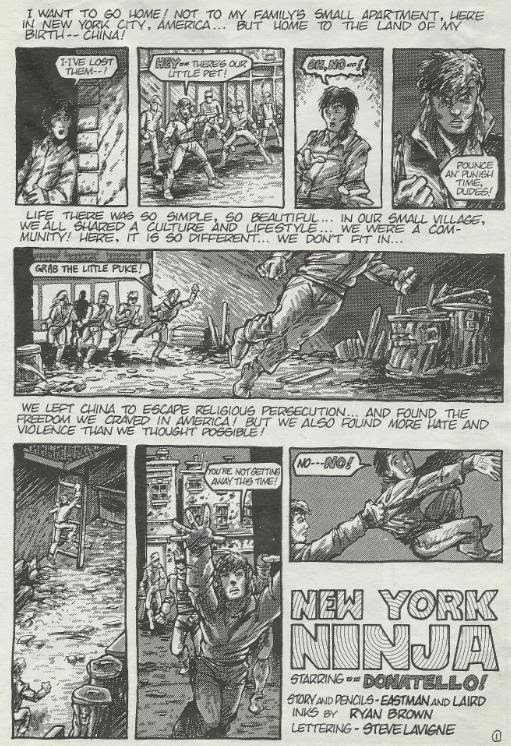 In an alley in New York, a young Chinese boy named Chang Lao is running away from a gang of hoodlums, lead by a boy named Frankie. Apparently, Chang came to the United States from China with his family in order to escape religious persecution, only to face persecution of a different kind. Frankie catches Chang and demands he pay his “protection fee”, otherwise he’ll get a beating. 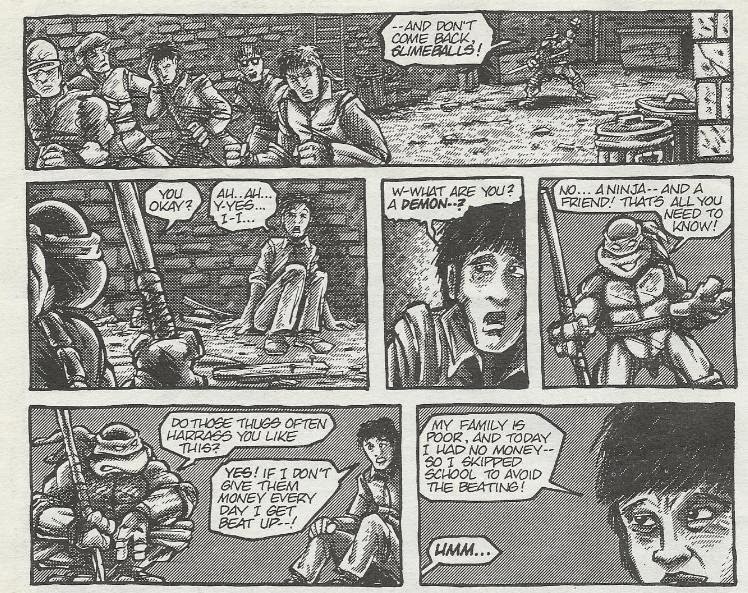 On the rooftops, Donatello is playing a game of hide-and-seek with Raph; loser does dishes for a week. He spots the altercation in the alley below and decides to intervene. He beats the punks with ease, but Frankie attempts to pull a switchblade on him. Don pummels Frankie and sends him into retreat. Don introduces himself to Chang, assuring him that he’s not a monster but a friend.

Suddenly, Chang’s father calls him inside their apartment. Don watches from the window as Chang tries to explain to his father that although the bullies threatened to hurt him, he still refused to defend himself. Chang’s father encourages Chang to stay the course, as their religion is one of absolute non-violence under any circumstance. As Don observes this insanity, Raph sneaks up behind him and tags him, gloating that he won the game. Don could care less, as he now has a bigger problem on his hands: keeping Chang alive.

The next day, Don keeps track of Chang as he goes to and from school. As he suspected, as soon as school’s over, Frankie and his gang attempt to shake Chang down. They chase Chang into an abandoned building, but Frankie plans to do more than just slap the kid around; taking out his switchblade and slicing him in the arm. Finding some flares in another room, Don attaches them to the ends of his bo staff and bursts into the building, claiming to be an otherworldly monster. He takes the punks out with ease, but wasn’t expecting Frankie to be packing a .45. Frankie lines up his shot, but before he can fire, Chang tackles him and beats him senseless. Don then scares Frankie and the punks away, swearing that if they ever trouble Chang again, he’ll come and get them. 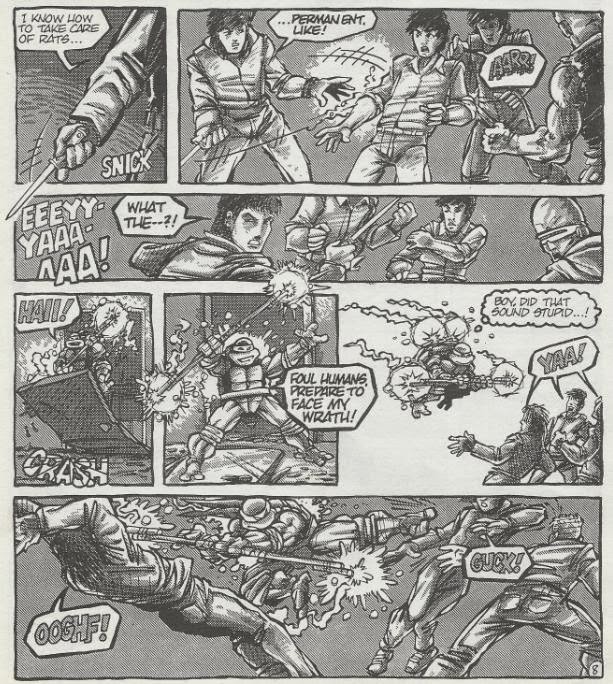 Don turns back to Chang, only to find him crying and prostrating himself on the floor, apparently believing he has dishonored his father and his religion by engaging in an act of violence. With a Buddhist catchphrase, Don puts Chang’s beliefs into perspective, assuring him that his ideals would be fine in a perfect world, but this is New York City. Defend your fucking self.

Chang concedes to Don’s wisdom and we learn that the two eventually became great friends, with Don teaching Chang the art of ninjutsu and other martial arts.

*This story was reprinted in “Shell Shock”.

*Parts of this story were adapted for the 4Kids TMNT cartoon series, in the episode “The Lesson”. There, Chang Lao was substituted with a young Casey Jones.

One more of those little back-up strips published in a Palladium Books supplement to their TMNT & Other Strangeness roleplaying game, this one being attached to “TMNT Adventures!” (which has nothing to do with Archie’s TMNT Adventures). “New York Ninja” is a bit on the duller side, as its contents don’t have any effects on the broader scope of the TMNT universe, as Chang Lao is never seen again. I think I would’ve liked to see the kid as a supporting character somewhere in the book just because you’d think Don having his own human buddy he’d been secretly teaching karate to on the side might show some story potential.

The 4Kids adaptation of the story, “The Lesson”, would’ve been fine if they hadn’t replaced Chang with Casey. It created a bit of a continuity glitch in regards to ages (even in the 4Kids series, Casey is supposed to be much older than the Turtles), much less the fact that none of the characters ever put two and two together and realized that they knew each other as kids.

Anyhow, the real point of this story is Don’s rather ham-fisted moral at the end: "Reverence is all well and good, but don’t be a pussy". I have to wonder just what religion the Lao family even was, as they never name it in the story. Whatever faith it was, I can’t imagine how it might have survived past the first decade of its conception. If the chief philosophy of your faith is “If someone is trying to kill you, go ahead and let them kill you, just so long as you never, ever try to defend yourself” then that’s pretty much a god damned death sentence if I ever heard one.

Anyhow, “New York Ninja” isn’t a bad story and it’s got a pretty practical lesson more kids should be taught (“fighting is okay if it keeps you from being gutted by thugs”), I just wish it’s events could’ve leaked into the primary TMNT comic, that’s all.

Grade: B- (as in, “But yeah, I fucking hate all those moronic kid’s shows that teach youngsters never to fight no matter what and that there’s always another way. Thank you, Ninja Turtles, for talking some sense into the youth of the 80s”.)