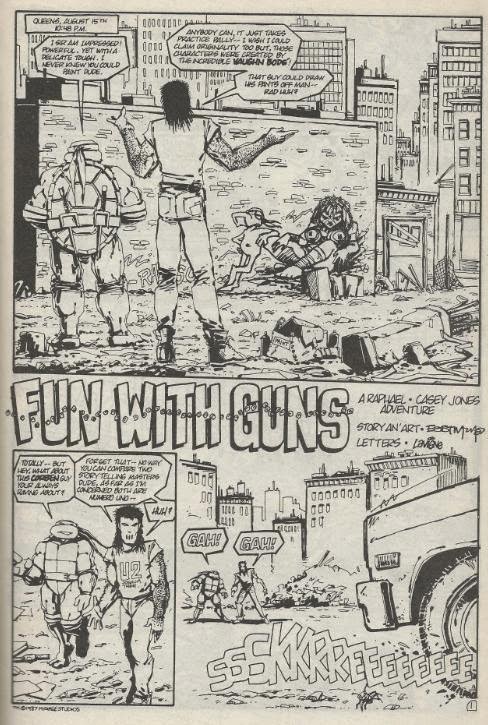 At an abandoned building in Queens, Casey is showing Raph a mural he just painted based on characters by Vaughn Bode’. Raph is impressed, though he always thought Richard Corben was Casey’s favorite artist. Suddenly, a car swings into the empty lot, being chased by another car. The pursuers gun down their prey and he slams right into Casey’s mural. The gunmen then get out of their car and prepare to finish off their victim. Casey and Raph won’t stand for it and begin hurling bricks at them. Realizing that there are witnesses, the gunmen shoot up the gas tank of their victim’s car and then hightail it out of there. 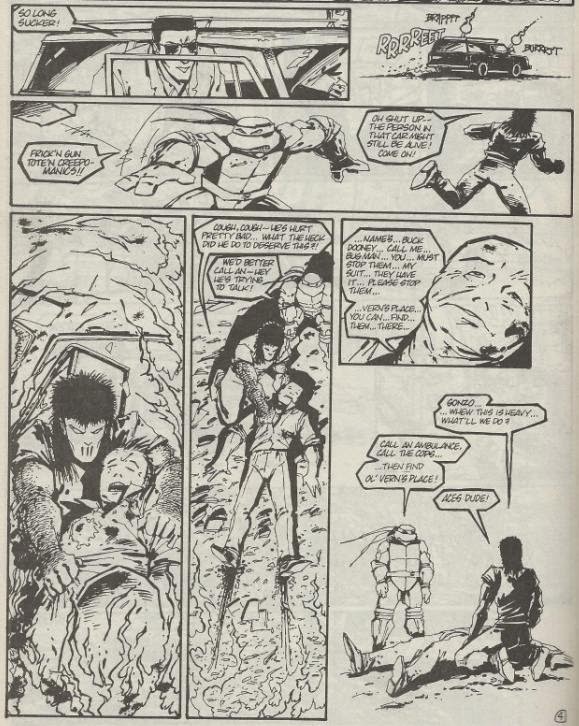 Raph and Casey drag the dying man from the flaming wreckage. He introduces himself as Buck Dooney: the Bug Man. He says they have to get to Vern’s place and retrieve a suit those thugs stole from him. Then he dies. Nothing better to do, Raph and Casey decide to find Vern’s place.

They head to Vern’s Pool Hall Royal in a seedy part of town. Inside, the leader of the thugs is explaining that with their newly acquired firepower and the Bug Man’s suit, they’ll be able to knock over any bank they want. Raph and Casey decide to “investigate” further and find some proof of their ill-deeds before they inform the police. They break into a store room and find a whole crap-load of automatic weapons as well as a duffle bag labeled “The Suit”. They grab the suit and some firearms and try to sneak back out, only to be surprised by a guard. The guard brains Raph with the end of a rifle, leaving Casey to escape. 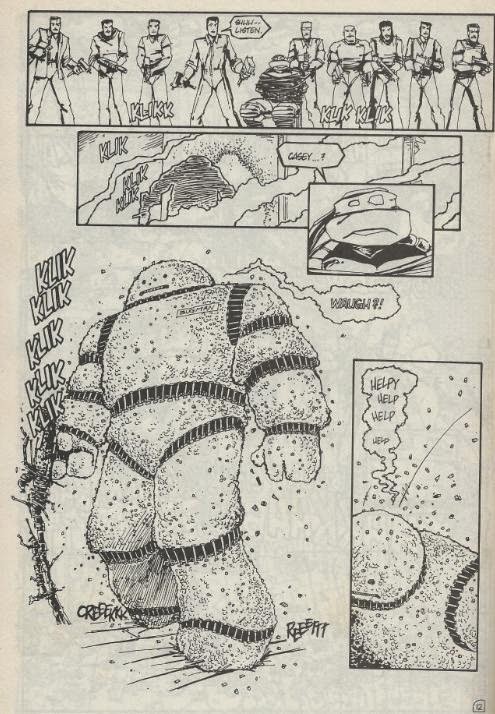 The thugs tie Raph to a chair and threaten to kill him if he doesn’t tell them where Casey went with the suit. Suddenly, a giant armored behemoth bursts through the window, wielding an automatic weapon. The nametag on the suit reads “Bug Man” and Raph realizes that it’s Casey. The thugs all open fire with their machineguns and litter the floor with empty casings. As the dust settles, Casey is completely unscathed within the suit. Unfortunately, the outfit is too heavy and Casey topples over, through the upper floor of the building, taking the bound-up Raph with him. Then, the entire floor of the building collapses and all the thugs sink into the hole. 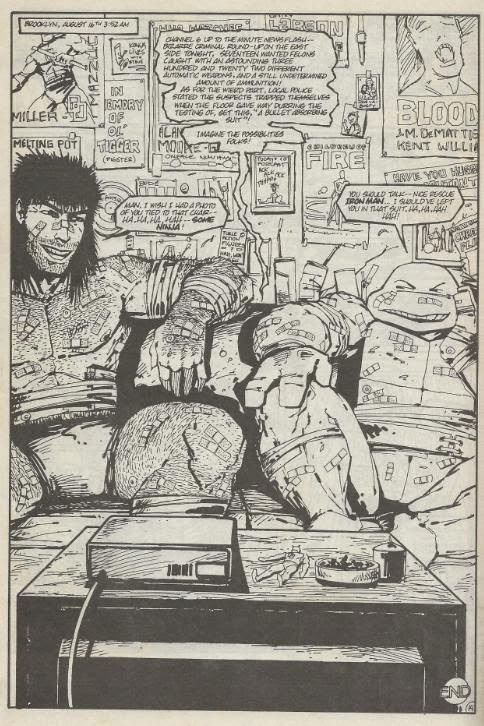 At Casey’s place, he and Raph are watching the news. The police apprehended the thugs shortly after the building collapsed, recovering the Bug Man’s “bullet absorbing suit”. Casey pokes fun at Raph for getting tied to a chair, while Raph wishes he’d left Casey in that suit he was stuck in.

*In later material, such as the “Bodycount” miniseries (also written by Eastman), Casey shows a distinctly different opinion toward firearms, repeatedly saying how much he hates them. Perhaps this adventure had altered his opinion of guns in some way.

*The characters Casey paints on the wall are from Vaughn Bode’s underground comic strip, “Cheech Wizard”.

*The nickname "Bugman" may be a reference to Mirage staffer Michael Dooney, who often went by that name at the Mirage offices (at least according to Peter Laird, he did).

As an Eastman solo piece with no involvement from Laird, it boasts most of the typical things you see in Eastman-only Turtles stories: lots of guns, lots of blood and at least one set of boobs (Casey’s mural counts). Eastman is a self-professed Frank Miller-oholic and a lot of his solo-penned stories reflect that. They sport the 80s sensibilities of ultra-violence and grittiness for the sake of grittiness, and unless you’re really into that sort of thing, it can be just as annoying as Laird’s “aliens and giant monsters all the time” stories.

Unlike “Bodycount”, which took the joke way too far, “Fun With Guns” confines it to a fourteen-page back-up strip and it holds together pretty well. It’s a fairly harmless little gag story with some great art by Eastman. Not much else to say, really. If it offers anything more, though, I’d say it’s the reveal that Casey likes to paint (even if it’s just naked ladies on brick walls). Shows a softer side to the guy, though most future stories never really ran with this character trait.

So far as the idea of the Turtles or Casey using guns, well, I’ve never been very fond of it. Thankfully, in this story, they don’t actually use any of them, though they do show an interest in purloining a few for their own ends.

“Fun With Guns” is an enjoyable Casey/Raph solo story and I always get a kick out of those, and hey, its still a better read than “Bodycount”.