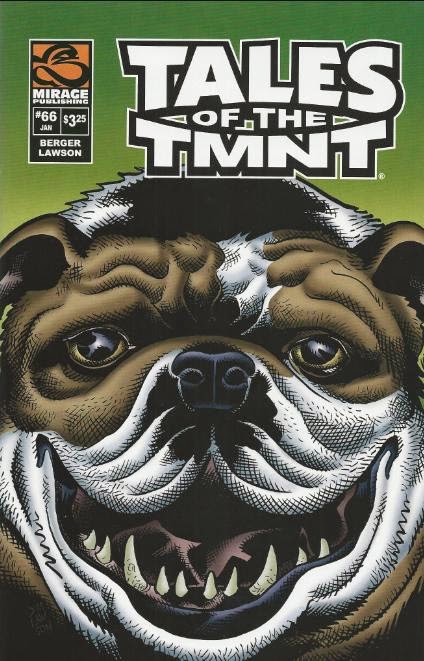 Frontispiece: A bandaged-up Raph holds a small dog, remarking how much he hates seeing the poor pups abused by bad owners.

It’s New Years Eve. On the roof of Casey’s place, Don is trying to fix the satellite dish so Casey won’t miss the football games. Mike, however, is mourning the loss of his youth, realizing that he and his brothers are getting pretty damn old. Down on the street, Mikey observes a mother and her son putting up posters for their lost dog, Appa. Filled with righteous vigor, Mikey takes it upon himself to find Appa and save that family’s New Year. Don reluctantly goes along for the ride. As they search the alleys, though, they find reward posters for dozens of different dogs and the plot thickens. 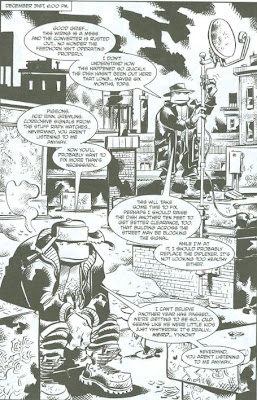 Elsewhere, at “Joe’s Fish Market”, a pair of Madhattan Maulitia thugs are emptying a truckload of the night’s “haul”. It turns out they’re behind all the missing dogs: kidnapping them and returning them to their owners for the reward money. It seems their organization’s funds are drying up and they need money to wage their xenophobic war on aliens.

At Casey’s place, the big man is pissed that he’s missing his football game. Fed up, he, Raph and Leo head to the roof to tell Donny to get the lead out. Seeing that Donny and Mike are nowhere to be found, they decide to go hunt for them.

Mike and Donny, meanwhile, have successfully found Appa, but only a moment too late. One of the Maulitia thugs has found him first and dragged him over to the fish van. Don and Mike intervene, making short work of all the thugs, though Appa scurries off in the ruckus. Realizing there are bigger fish to fry, they climb into the fish van and take a trip to “Joe’s” to put a stop to this nonsense. 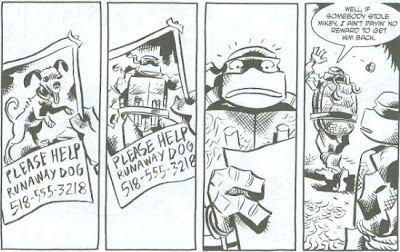 Meanwhile, Casey and the gang have also noticed the bizarre number of animal reward posters. It doesn’t take long for them to put two and two together and realize that Mike has gotten distracted by the all puppies.

Mike and Donny have successfully infiltrated “Joe’s”, but not so successfully ended the Maulitia’s operation. Taking tasers to the chest, the Turtles get locked up in cages. The Maulitia are freaked to see real aliens for themselves, validating their entire crusade, and intend to show Mike and Donny to the media. 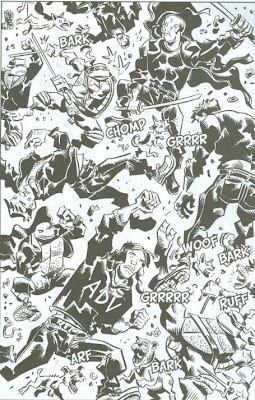 Not far away, Casey and the rest are met by Appa, who beckons them to follow. They do and Appa leads them straight to “Joe’s”. As they bust in and start taking down the Maulitia, Mike escapes from his cage and frees all the other dogs so they can get some well-earned revenge. With the bad guys beaten, Mikey makes a discovery: there are TWO Appas! Actually, the real Appa had been caged up at “Joe’s” the whole time. The one they’d all been chasing was really his twin sister, Lassie.

The Turtles and Casey then decide to forget about the football game and do something truly meaningful with their New Years: they return every lost pooch to their rightful owner.

*The Turtles previously encountered the Madhattan Maulitia in Tales of the TMNT (Vol. 2) #57.

*Due to the Madhattan Maultia’s uncertainty in regards to the existence of aliens (and also that the public isn’t aware of them), and the fact that Mike acknowledges that he and his brothers are getting really old, this issue likely takes place just before TMNT (Vol. 4) #1.

*I’m gonna go out on a limb and say that “Appa” is named after the flying bison from Nickelodeon’s “Avatar: The Last Airbender” cartoon, in reference to the recent Nickelodeon/Viacom buy-out.

So we’ve reached the home stretch for Tales of the TMNT (Vol. 2). Only five issues to go and then it’s all over! Kicking off the “final five” is this, a comedy relief issue with a pretty saccharine ending. That might normally be a bad thing, but the goofy banter and self-awareness of the issue helped overcome what might sound like a pretty lame story in summary format.

In several ways, “There’s No Place Like Home” works really well as a lead-in to TMNT (Vol. 4). It addresses one of the major plot threads of that series: the Madhattan Maulitia and their xenophobic war on aliens. Issues like this and Tales of the TMNT (Vol. 2) #57 go a long way in building them up so their appearance in TMNT (Vol. 4) #1 feels a little less random and out of the blue. Additionally, Mike’s acknowledgement that he and his brothers aren’t teenagers anymore segues nicely into the first issue of Volume 4, which had the most “we’re too old for this shit" dialogue of all the issues in that series.

If anything, I’d say it takes place only a few days/weeks before TMNT (Vol. 4) #1, given the seasonal setting. In that regard, comedy relief story or not, it makes for a pretty serviceable prologue to that series if you wish to look at it that way.

So far as the “comedy” goes, well, this isn’t a laugh out loud story by any means, but the humor is implemented well. Better than other comedy issues such as, say, Tales of the TMNT (Vol. 2) #62. The fun is mostly in the dialogue, which almost seems like it was written after Lawson had drawn the book and captioned into place. It’s all a bit goofy, such as the convoluted names for the various Bowls that Casey wants to watch, or Leo of all Turtles randomly musing, “Mmmmm…Fritos.” With any luck, it’ll at least put a smile on your face.

While “There’s No Place Like Home” may not be what you’re wanting to see from the last five issues of Tales, I wouldn’t really look at it as a waste. Although I do wish they’d used these last few issues to tie-up the dangling plot threads from previous stories, the covers and plot summaries for these issues have been available for so long that I made peace with them a good while back.

Grade: C+ (as in, “Could Lawson have drawn cuter dogs, though? These mutts are all so ugly I can’t imagine anyone paying a reward to have them back”.)