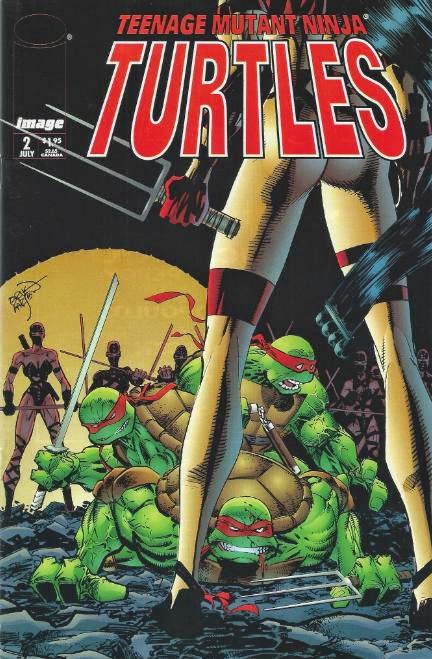 In the skies above Manhattan, Donatello and his cyborg “buddy” are still falling to their deaths. The cyborg, blaming Don for their predicament, attempts to blast the Turtle in the face. Instead, he accidentally blows his own brains out. With nowhere soft to land in sight, and his consciousness fading, Don turns his shell to the ground and prepares for impact. 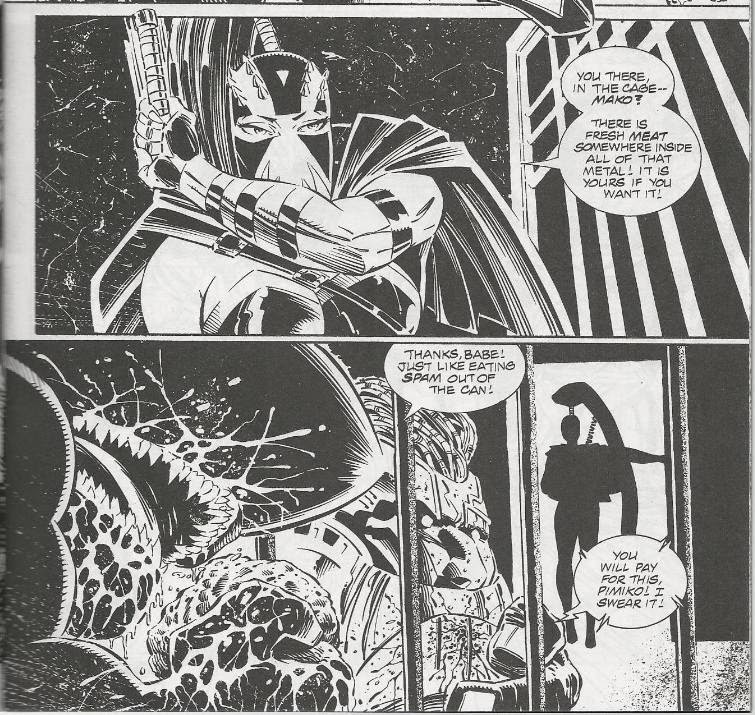 In upstate New York, Pimiko and her cyborg lackey arrive at Dragonlord Komodo’s headquarters with Splinter’s heavily drugged body in tow. They lock Splinter up in a jail cell, all the while a vicious half-man/half-shark monster named Mako makes carnivorous comments toward them. The cyborg gets too close and Mako bites his arm off. Pimiko insults the cyborg's carelessness and, enraged, he decides to let her know how sick he is of taking her orders. Pimiko stabs him in the chest and tells Mako that beneath the crunchy robot exterior is plenty of fresh meat. Mako proceeds to pull the damaged cyborg into his cell and devour him.


Down in the sewers, Leo leads Mike and a bandaged-up Raph away from the sewer lair, fearing their location has been compromised by Pimiko and the Dragonlord. Leo takes them to a forgotten mausoleum in Westwood Cemetery, saying it would make for a good temporary lair. After some clowning around between Raph and Mike, Leo informs them that the first order of business is to find out who the "Dragonlord" is and get Splinter and Don back. Leo gives Raph one of Casey’s old hockey masks to hide his scarred face and asks him to meet up with his contacts in the Foot Clan to see if they know anything about Pimiko (other than the fact that she took her name from a sorceress in Feudal Japan who ruled with the aid of a thousand women and one man). 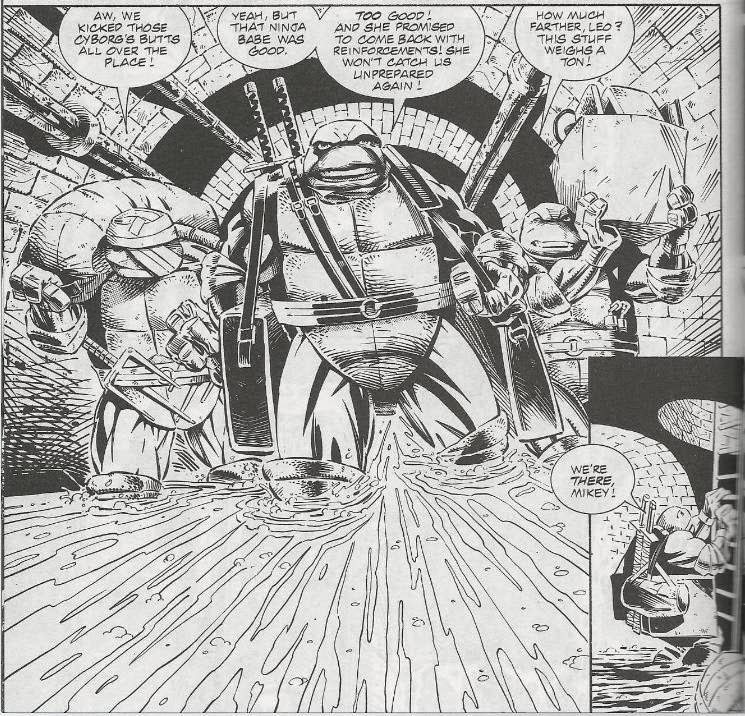 As Raph leaves, he fails to notice a kunoichi (female ninja) named Angel, watching him from behind a tree. Angel reports her findings to Pimiko, who is meeting with Dragonlord Komodo in one of his laboratories. The large and imposing Dragonlord orders the cyborg project to be suspended because, according to Pimiko, the cyborgs were all dunces. His scientists are currently operating on a hairy man with silly hair named “Weasel” who apparently boasts four claws on his hands and an advanced healing factor. They discover that Weasel, despite his name, is not an anthropomorph, but just some kind of mutant. Komodo deems him worthless and orders his body disposed of. Suddenly, Weasel wakes up, snikts his claws and swears vengeance, calling everyone “bubba” in the process. Pimiko cuts his head off.

Back at the Mausoleum, Leo is attempting to contact Splinter via the astral plane, much to the amusement of Raph and Mike. Raph tells Leo that he’s not nearly skilled enough to manage such a feat, but Leo refuses to quit. Now with some peace and quiet, Leo continues on and is suddenly contacted by the spirit of Don. Don tells Leo of his fall from the chopper and shows him his dying body, splattered in an alley somewhere. Don is paralyzed from the neck down, losing blood and very close to death. 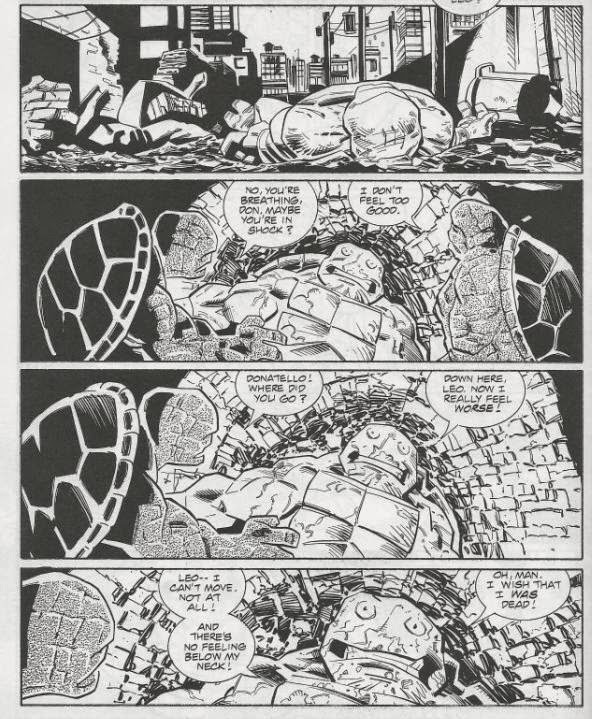 At the other end of the mausoleum, Mike finally hits pay dirt on the internet, learning about a large piece of property in upstate New York owned by a Komodo Inc. Raph says that his contacts in the Foot said Pimiko works for Komodo Inc., making that the best place to go look. The Turtles attempt to snap Leo out of his trance, only to suddenly find the mausoleum filled with kunoichi. Pimiko is at the front of the invading army, informing the Turtles that she has had them under constant surveillance and orders her kunoichi to attack. Despite all the commotion, Leo is still stuck in his trance…

(The following is exclusive to the 1997 trade paperback collection) 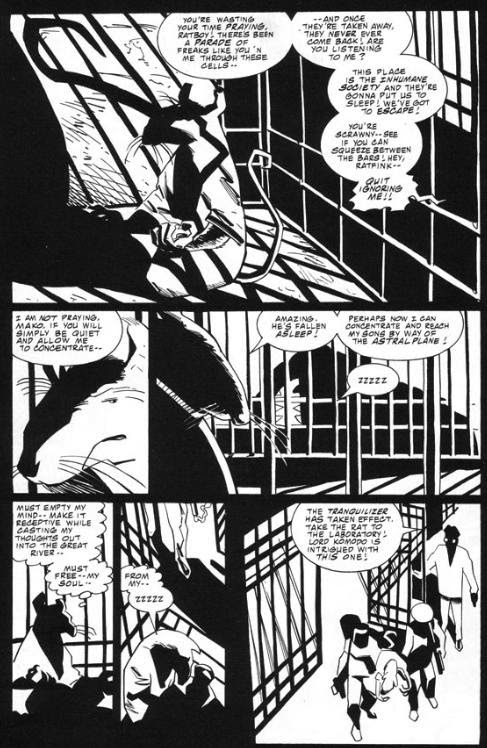 Meanwhile, back at Lord Komodo's place, Splinter sits tranquily in his prison cell, meditating. From the cell across from his, Mako angrily demands Splinter stop "praying" and try to slip through the bars so they can both escape. Splinter begins to explain that he's trying to contact his sons via the Astral Plane and needs to concentrate. Suddenly, both he and Mako fall asleep. Guards then remove Splinter from his cell and haul him off to Lord Komodo's laboratory, the tranquilizers having proved most effective...

*Raphael discovered the old church (adjacent to Westwood Mausoleum) and considered using it as a remote base in TMNT (Vol. 2) #3.

*An additional page of material was added to the end of this issue for the 1997 trade paperback collection of issues #1-6 published by Image comics. The page was added to help transition issues #2 and #3, and also to accomodate for uneven page space created by conflicting two-page spreads. It is page 42 in the trade paperback.

Image’s TMNT volume was a series that I had to warm up to. It had a very action-packed, exciting start, but was lacking in dynamic or even proper characterization. Despite that, it was a series that improved with each successive issue and I can say that this second installment is a far sight better than the first.

Issue 1 was sort of “the hook”; full of twists and turns and nothing but fight scene after fight scene after fight scene in order to draw the audience in. This issue slows down a bit to give us some solid interactions between the Turtles and a look at the "mysterious" (read: “shallow”) new villains that suddenly sprang into our faces. The bits with the Turtles hold up strongest, as Mike and Raph clown around inside the mausoleum and pick on Leo’s “Mr. Serious” routine. The only thing that sort of bugged me was that they seemed way too carefree considering what just happened to them only a couple hours before (they lost their home, two members of their family and Raph got half his face melted off). You’d think they’d be a little more, I dunno, serious about the situation.

The parts with Pimiko and the Dragonlord, on the other hand: not so good. The Dragonlord is your standard “ruthless corporate businessman by day/evil super villain by night” stereotype that John Byrne’s Lex Luthor helped to popularize throughout the 80s and into the 90s. We don’t learn anything about him other than the fact that he’s evil and is obsessed with locating the perfect furry. The entire “Weasel” gag was nauseating, too. Pointless to the plot and not even funny.

As for Pimiko and her kunoichi, well, they’re a bit of a relic of the 90s comic fads, aren’t they? Even by 1996, the whole “bad girl” thing was getting a bit old in comics, but far be it from Image to ever let go of that worn out trend. Pimiko-herself would prove to be a pretty decent character in the series if only her army of kunoichi didn’t dress like rejects from a kinky S&M Skinemax flick. The rhinestone-studded leather masks, corsets and meaningless bondage straps just look ridiculous.

But, once again, the volume’s saving grace comes in the form of Frank Fosco’s killer art. His new inkers, Chance Wolf and Andrew Pepoy, are definitely a better match than Larsen, doing an excellent job of creating the illusion of light and shadow within the mausoleum lair. If there’s one little detail Fosco implements that I love, it’s that when the Turtles aren’t running around in battle, but just chilling in their lair, they pull their bandanas down to around their necks, rather than constantly wear them around their eyes. Artists tend to draw the bandanas like they’re glued onto the Turtles’ faces, to the point where they sleep with the damn things on, so it’s always nice to see an artist put that little extra detail in there.

Grade: C- (as in, “C’mon, spiky shoulder pads? Really? Do those serve any function whatsoever?”)