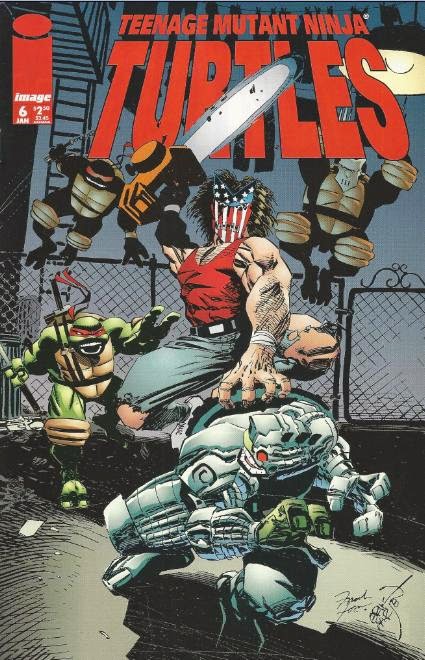 Down in the sewers, the Turtles are just about done cleaning up their old lair. Mike retrieves the baby turtles Splinter gave them, though Raph informs him that one was accidentally crushed by Donny’s giant cyborg foot. The Turtles begin to wonder if they’ll ever find Splinter and if he’ll ever be returned to normal, but they have more pressing urgencies: namely, Donny’s mental health. 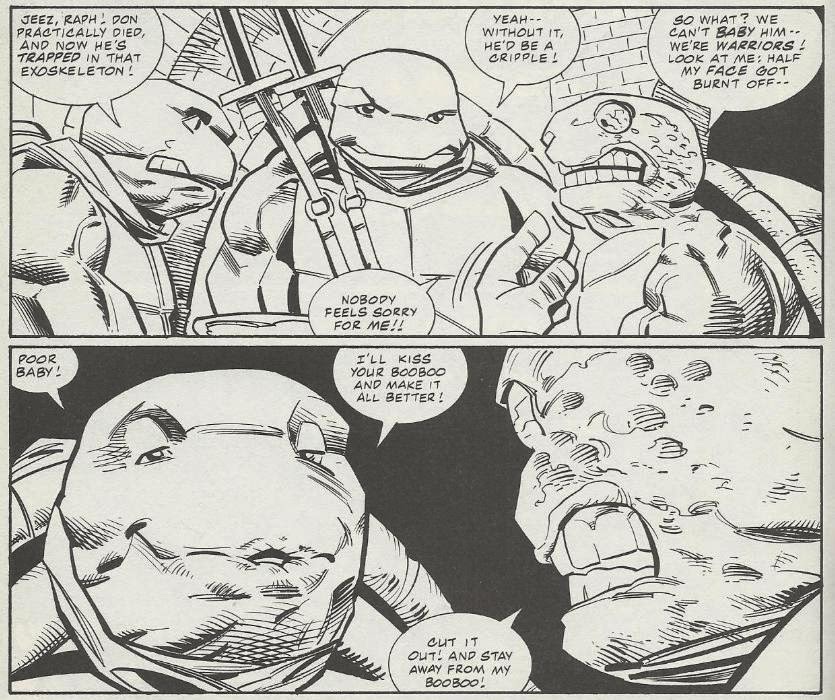 Stepping into Don’s room, they find their brother with his arm-cannon aimed at his head. They urge him not to commit suicide, but Don says it’s all a big misunderstanding. He pulls the trigger and nothing happens. He explains that he’s still tinkering with his new cyborg body and was trying to ensure that his arm-cannon could never be used against himself, as it had been used against the cyborg armor’s previous user. The Turtles decide to challenge Donny to a sparring match to help him gain better control of his new body. Don is reluctant, as he doesn’t want to hurt any of them, but they insist. Don uses the shape-shifting armor to transform his limbs into various tools, including a bo staff, and takes his brothers out with little effort. 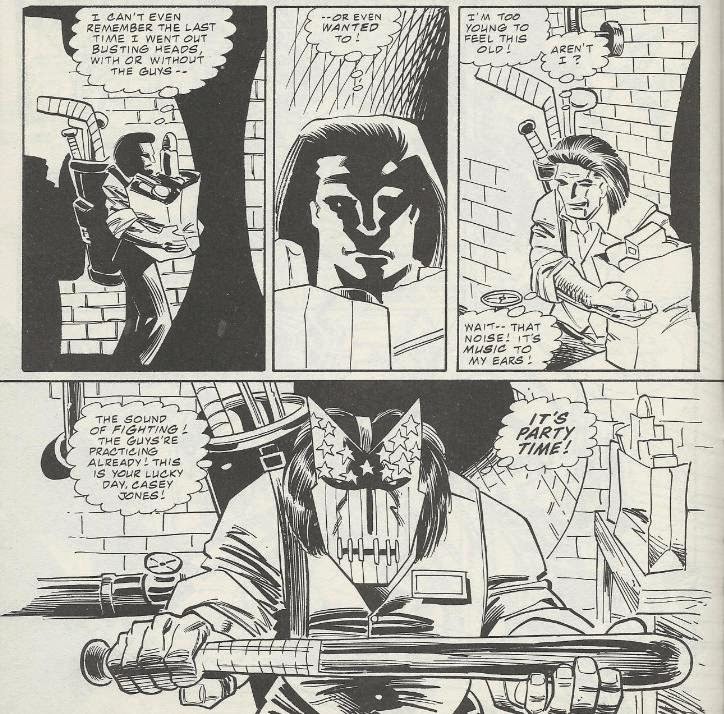 Meanwhile, Casey Jones is heading down to the lair with some groceries. He’s a bit depressed, as the responsibilities of parenthood have neutered his old vigilante ways. He hears the Turtles sparring and decides to join the party for old time’s sake. Donning his star-spangled hockey mask and grabbing a bat out of his golf bag, he “sneaks” into the lair. He mistakes Donny for one of the cyborgs that trashed the lair and decides to save his buddies. He begins wailing on Don, who refuses to fight back. Suddenly, the armor’s computer takes command and prepares to blow Casey’s head off with its arm-cannon. Casey and the Turtles slowly talk the computer down, giving Don enough time to reassert control. Casey apologizes, having forgotten that Mike told him Don was a cyborg now.

Casey asks Mike to babysit Shadow for him while he and April go to a party. Mike doesn’t mind, as he loves babysitting the little princess, and leaves for Casey and April’s apartment. Once there, April tells Mike that the publishers he sent his short fiction to have all rejected his submissions, save Poetry Digest, which has paid him $20 for two of his poems. Mike is thrilled, as this is his first piece of published work. Casey and April then leave for their party (Casey has apparently been promoted to Assistant Produce Manager at the grocery store where he works and they want to celebrate). Leaving, April feels a bit depressed, wondering if Shadow could ever love her like she was her real mother. Casey reminds her that Gabrielle will always be special to Shadow, but April is just as much her mother, now. They then consider the prospect of giving Shadow a baby brother to play with. 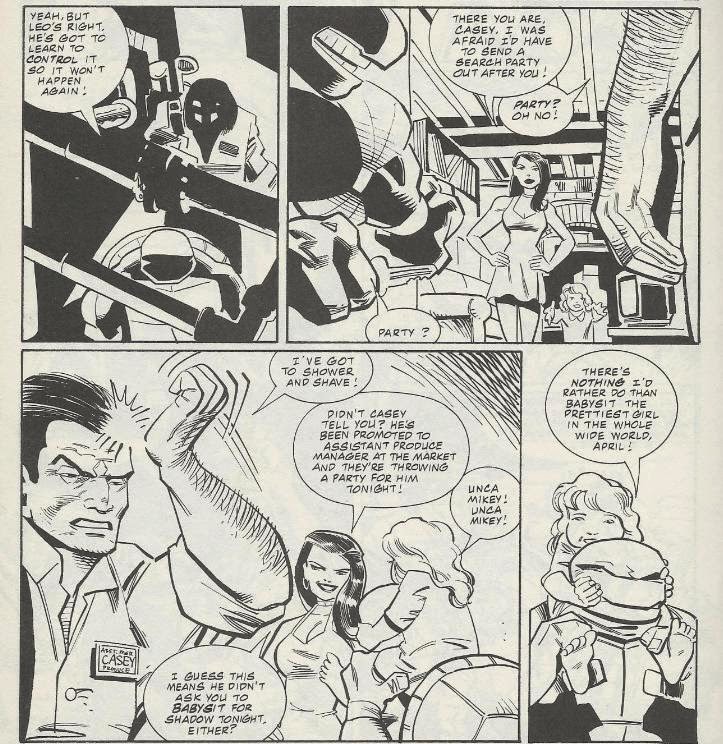 Back at the apartment, Mikey attempts to put Shadow to bed, but falls asleep in the middle of the bedtime story. Shadow goes back out to the living room to play more video games when she hears a sound at the door. Thinking it’s her mommy and daddy, she opens the door up to find a stranger. The stranger than whisks her away.

*Splinter gave the baby turtles to the TMNT as a birthday gift in TMNT (Vol. 3) #1.

For me, issue 6 was the real turning point for Image’s TMNT series. A light “breather” issue, it gives the book what it had been needing since the series began: a chance for the characters to really interact on a personal level. Carlson proves that once he's willing to slow down for a second, he actually has a very good handle on the primary cast members. The Turtles all show a concern for Donny’s well-being, but also being warriors, they’re equally concerned as to whether Donny can still fight or not. This, of course, doesn’t erase the frustrating fact that none of them seemed to give a shit when they thought Donny was dead, but it does take the edge off a bit.

One of my favorite moments, though, was Mikey’s interaction with the Jones family. I loved how Carlson picked up on a pretty forgotten thread, Mike’s interest in being an author, and ran with it to give the Turtle something to do on the side. Casey, as cool as he is, is really sort of a loser. Seeing him celebrate something as ridiculous as being “promoted” to Assistant Produce Manager is hilarious, as is his interaction with Mike; “Two successful business tycoons, that’s us, Mikey!”

There’s some awkward info-dumping going on in the issue, as Mike has to “remind” his brothers that Shadow is Casey’s daughter (like they’d forget that), and Casey and April have an awkward scene where they tell each other about Shadow’s true parentage, but it was more for the audience’s sake and is important back story for any newcomers. Shadow’s parentage will be at the crux of an upcoming story arc in the title, so the info-dumping was a necessary evil.

Fosco’s keeping up the good work. I love this cover, even if it’s a tad misleading in regards to content (like most of his covers). As a life-long “Friday the 13th” fan, I do get annoyed to no end when I see people associating hockey masks with chainsaws (Jason has never used a chainsaw. NEVER!), but it just looks so cool I can’t get too upset. Fosco draws an…interesting April, that’s for sure. She doesn’t really look like April; more like a supermodel or some Mafia guy’s floozy or something. I think it was the loss of the frizzy hair that threw me off.

Anyhow, this issue provided a break in the action the series desperately needed and shows that Carlson does have a good handle on the characters when he's willing to take the adrenaline down a notch.

Grade: B (as in, “But I don’t think I’ve ever liked Casey’s star-spangled hockey mask”.)