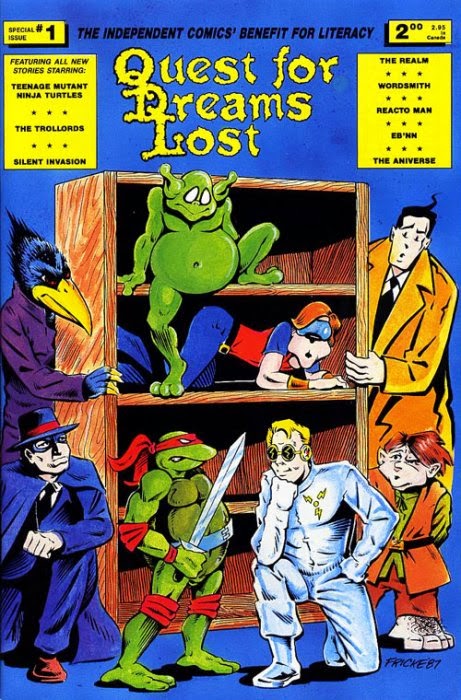 (The following context is taken from the “Quest for Dreams Lost” comic plotline and is not mentioned in the actual “Word Warriors” segment.) 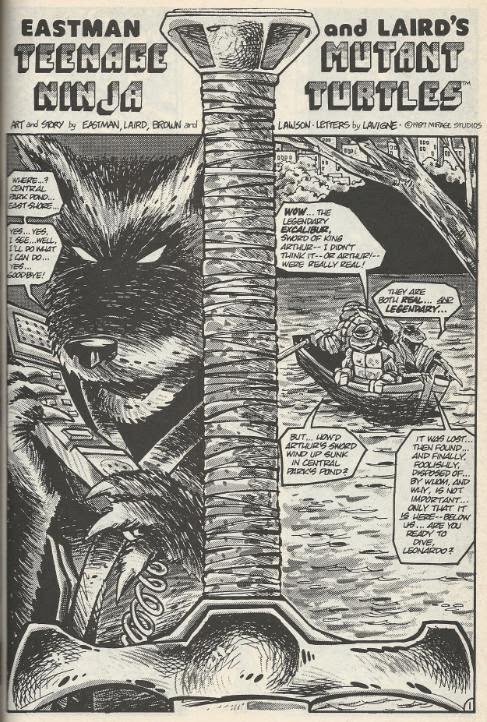 After a pair of movers lose their van full of priceless historical and literary artifacts, their boss decides to phone up a slew of heroes to retrieve the missing antiques. Matt Sinkage (of “Silent Invasion”) recovers the portrait of Dorian Gray, Eb’nn (of “Eb’nn”) recovers the Maltese Falcon, Reacto Man (of “Reacto Man”) recovers H.G. Wells’s time machine, J. B. Space (of “Tales from the Aniverse”) recovers the Pied Piper of Hamelin’s pipe, Wordsmith (of “Wordsmith”) recovers The Shadow’s ring, the adventurers from “The Realm” recover Dorothy’s ruby slippers, the Trollords (of “The Trollords”) recover Charon’s ore from the River Styx, and the Teenage Mutant Ninja Turtles… 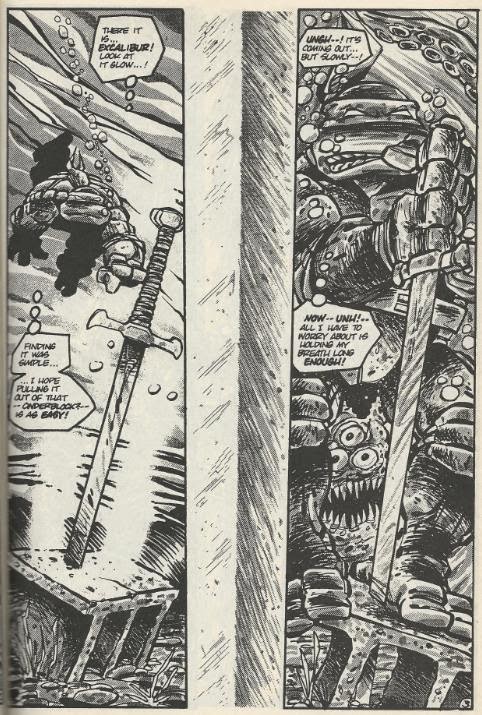 In a rowboat out in Central Park pond, Splinter tells the boss over a cellular (???) phone that he is over the spot where the item has been discarded and is preparing to secure it. As one of the Turtles (who? I dunno) rows, Leonardo exclaims that he can’t believe THE Excalibur, sword of King Arthur, is sunk at the bottom of Central Park pond. Splinter sends Leo down to retrieve the blade, and as Leo dives, he suddenly and inexplicably regrets not bringing his katana with him.

Swimming down to the floor, he finds Excalibur imbedded in a cinderblock. He begins working it free, unaware that a tentacled, three-eyed monster is coming up behind him. As the monster clutches him, Leo finally works the sword free and slices off the beast’s tentacles. His work complete, Leo resurfaces and delivers Excalibur to Splinter.

*This story was originally published as part of a single issue anthology comic, “Quest for Dreams Lost”, published by the Literacy Volunteers of Chicago. The goal was for all proceeds to go to the fight against illiteracy and for the content of the book to encourage kids to read more classic literature.

*This story was later reprinted in the “Shell Shock” trade paperback, but without any context whatsoever to the story, making it rather confusing if you are not acquainted with the plot of “Quest for Dreams Lost”.

*In the letters page of TMNT (Vol. 4) #17, Peter Laird made it explicitly clear that “Word Warriors”, though written and drawn by himself and Kevin Eastman, is not a part of Mirage continuity: “The Leo/Excalibur story was done for an anthology comic book to benefit literacy, as I recall, and was not meant to be considered part of the Mirage TMNT Continuity”.
*The Aniverse #1, which has characters who appear in this special, features a guest TMNT crossover pin-up by Laird and Dooney.

Man, you have no idea how confused this story made me when I first read it. Like most folks, my first encounter with “Word Warriors” (if that’s even its real title) was in the “Shell Shock” trade paperback, and like most people who read it that way, I didn’t have a fucking clue what was going on. Who was Splinter talking to on his kickass gigantic 1980s corded cellular phone? What was Excalibur doing in Central Park pond? Where did that baby Cthulhu come from? How come none of the Turtles ever mentioned again that they had fucking Excalibur lying around in their basement?

“Shell Shock” is a great resource, but the thing has some serious set-backs. The aforementioned error-riddled contents page being one of them, but perhaps the worst offender is the lack of any sort of index page explaining where the multitude of included shorts originated from (heck, they managed to include this sort of index in Gobbledygook (Vol. 2) #1, so it’s not an impossible feat). Without any context behind the plot or even a source to go look into, I was pretty much just left scratching my head in utter confusion.

Then the internet happened and hey, wouldn’t ya know it? “Word Warriors” is from some hyper-obscure charity one-shot that no one’s ever heard of and if you say you’ve heard of it before now then you’re a fucking liar. Problem solved.

At five pages, it’s a pretty unremarkable story, even with the context of the overarching “Quest for Dreams Lost” plot. Actually, the premise of “the Turtles diving underwater to recover an ancient artifact and getting attacked by a monster” was somewhat recycled (intentionally or otherwise) for “The Rippling” in Tales of the TMNT (Vol. 2) #20, which did a bit of a better job with it. Admittedly, it had fourteen pages to work with rather than five.

Laird’s revelation that “Word Warriors” is a non-canon story is a tad disappointing if you were anticipating Leonardo having all sorts of crazy adventures with Excalibur in future issues. In actuality, even if it was canon, that still wouldn’t have happened since all the artifacts were returned to their owner at the end. Its not like Leo kept the thing.

Anyhow, I applaud the purpose of the project, don’t get me wrong. Anything to get kids interested in reading is a worthwhile endeavor. The story-itself, though, even when taken as part of the larger “Quest for Dreams Lost” comic and not as an isolated “WTF” moment, still isn’t much to write home about.